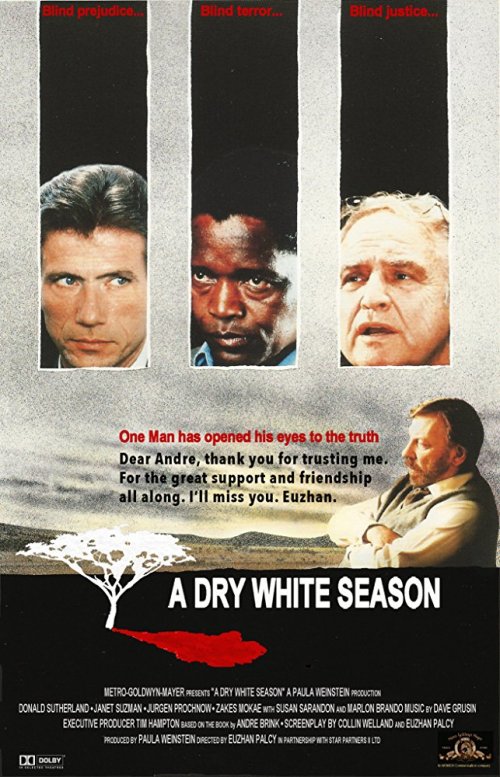 The story centers on South African schoolteacher Ben (Donald Sutherland) who has led a peaceful law abiding suburban existence and has no idea about the social injustices around him. One day his black gardener (Winston Ntshona) comes to him complaining about how his son was beaten by police simply for attending a peaceful rally. Ben initially dismisses the claims and insists the son must’ve done something wrong, but when he investigates the issue further he finds some startling revelations about how far the authorities are willing to go to stop dissent and when Ben decides to challenge the police on this his life and security get put on the line.

The film is based on the novel of the same name by Andre Brink and directed by Euzhan Palcy who became the first Black woman to direct a film that was produced by a major Hollywood studio. For the most part the film is polished and well made and at the beginning emotionally effective as we see first hand the brutal treatment of the protesters by the police. I also liked how it shows both sides of the issue by having Ben’s wife Susan (Janet Suzman) admit that apartheid is wrong, but too afraid for its abolishment as she fears it might put the whites at too much of a disadvantage.

Unfortunately somewhere along the way it starts to lose steam and ends on a whimper that is nowhere near the emotional level that it began with. Part of the problem is that it suffers from a weak main character. Sutherland plays the part well, but it’s hard to understand how someone could live well into his middle age years and still have such extreme naivety to what was going on in the country that he resided in. He’s also dependent on those around him to do most of the legwork and you have to question what difference does our hero’s actions ultimately make anyways since apartheid continued on for many years after this film’s setting, which is 1976.

All of this could’ve been resolved had Marlon Brando’s character been made the protagonist. Brando came out of retirement to take on the supporting role and agreed to do it at union scale, which was far below his usual salary demands. His presence adds zest to the proceedings as a lawyer who is quite attuned to the corrupt system, but decides to give it a fiery court battle anyways and it’s a shame that he’s only in it for a brief period and then just completely disappears during the second half.

The ending differs a bit from the book and was added in by director Palcy, which has a black cab driver Zakes Mokae taking the law into his own hands and shooting the Jurgen Prochnow character, who plays a policemen, after he intentionally ran Sutherland over with his car. Palcy did this to show how even decent people can be pushed to violence, which I agree with, but she seems to feel the need to justify this by having a flashback ‘replay’ of all the previous events that drove Mokae to pull the trigger, which comes off as heavy-handed. If we’ve watched the movie then we already know what happened and don’t suddenly need a ‘refresher course’.

As a drama it’s an adequately compelling, but there’s other movies on the same subject and I can’t say this one stands out from those. I was also disappointed to find that the book from which this is based was fictional as I initially thought it was a true story since it takes place in a very specific year. I’m not saying some of what goes on here didn’t happen in a broad sense, but having it centered on verifiable events gives it more relevance and makes it seem more like telling a story as opposed to just making a political statement.

This film chronicles the life of Tsar Nicholas II (Michael Jayston) of Russia and his marriage to Alexandria (Janet Suzman). Based on the novel by Robert K. Massie it examines the height of his power and his apathy to the poverty of his people and his reluctance to listen to their needs, or consider a more democratic form of government. It also looks at his personal life including the birth of his son Alexei (Roderic Noble) who is diagnosed with hemophilia and his wife’s over-reliance on Grigori Rasputin (Tom Baker) a man pretending to have divine connections who ultimately uses his influence on Alexandra to take control over her political affairs when her husband is away. The film also portrays Russia’s involvement during WWI as well as the Tsar’s downfall and eventual exile in Siberia with his family.

The film is basically split up into three parts with the first hour looking at Nicholas’ family life while intercutting with scenes showing the discontent of the Russia people and the efforts of Vladimir Lenin (Michael Bryant) to create a revolutionary form of government. The second hour examines Russia’s war involvement and the many warnings that Nicholas is given not to get involved in it, but foolishly decides to anyways, which ultimately creates massive upheaval. The third hour looks at his abdication of power and the family’s exile and virtual imprisonment at the Ipatiev House in Yekaterinburg where they nervously await their fate.

Initially I thought the third hour would be the weakest as we all know they get shot and killed execution style, but to my surprise it is actually the strongest part of the film. To an extent tearing the characters away from their plush surroundings and forcing them to exist in bleak, squalor-like conditions actually humanizes them and allows the viewer to empathize with them particularly the four daughters who had nothing to do with their father’s harsh policies and just wanted a chance to grow up and live a normal life. The scene where the family is herded into the basement of the home in the early morning hours and forced to sit silently while awaiting their executioners is quite possibly one of the most intense moments ever captured on film.

The performances are uniformly strong particularly Suzman’s as well as Baker as the evil Rasputin who’s drawn out death scene may be one of the longest in movie history. Laurence Olivier in a small, but pivotal bit as the Prime Minister gets two commanding moments including his speech after the Bloody Sunday massacre and later his strong misgivings about the country’s war involvement.

The film is full of brilliant cinematography, direction, costumes and set pieces and is certainly something that must be watched on the big screen to be fully appreciated. I enjoyed the lavish interiors of the Winter Palace especially their walks down the elegant hallways that are lined with Royal guards, but found it equally interesting when Nicholas returns there after the war and forced to walk down these same hallways, which are now darkened and rundown. The many long distance shots of the flat and majestic landscape is also impressive particularly a view of a rolling sunflower field.

Although this film has never attained the well-known classic status of Doctor Zhivago, and in fact this was producer Sam Spiegal’s answer to that film when he was blocked from working on it, I still found it to be every bit as compelling and well directed.