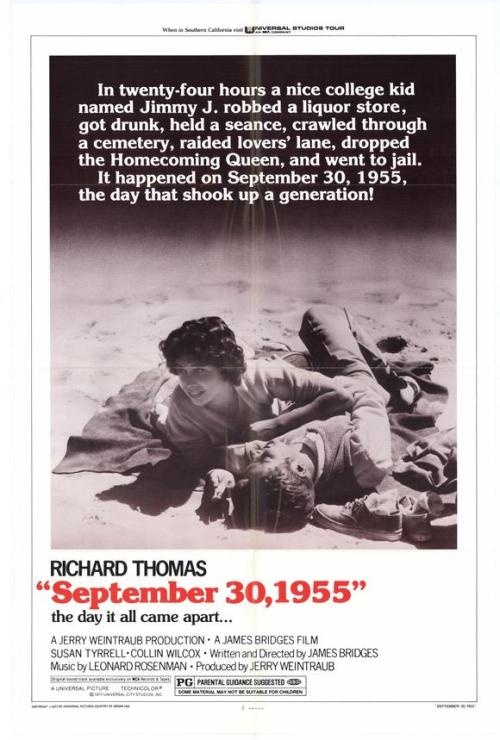 4-Word Review: Death of a legend.

The title represents the date that the legendary actor James Dean died in a car crash and his death has an adverse effect on a group of teens in a small southern town.

Richard Thomas is the main character who, along with his girlfriend Billie Jean (Lisa Blount), seems to get the most upset. Although some of his actions may seem fanatical it is really not as extreme as you may think or could’ve been and at no time does he ever lose sight of reality. For the most part the story is more a look at lost young souls searching for an identity than it is on celebrity worship.

The plot itself is slow with scenes that become unnecessarily drawn out with heavy-handed drama. The ending is unsatisfying as it doesn’t even give us a hint as to whatever became of these characters that are all left hanging in unfinished scenarios making the whole thing seem like just another sappy 70’s teen romance/ tragedy.

Beyond the poor structure there are some good points. One is the chance of seeing budding young talents like Tom Hulce, Dennis Quaid and Dennis Christopher working together and carrying a film. The other is director James Bridges who shows strong insight into Dean’s mystic and why he made such a powerful connection with the youth giving one the feeling that Bridges himself was a big Dean fan at the time as well. He also makes an effective statement about how many lost, lonely souls there are out there and the stifling nature of small town life. His recreation of the period is excellent and the interactions between the characters seem real and authentic. The assessment of the era is honest without being condescending and you feel like you are a part of the 50’s experience, which is interesting and fun.

Unfortunately it becomes too labored and trapped by the sensibilities of a bygone era while also being completely humorless and too talky.