4-Word Review: No hand no problem.

Major Charles Rane (William Devane) returns home to a hero’s welcome after spending 7 years a prisoner of war. As part of the ceremony he’s given 2,555 silver dollars to commemorate each day that he was held in captivity. A few days later a group of thugs invade his home looking for the silver dollars and when Rane refuses to tell them where they are they stick in his hand into his garbage disposal before shooting both his son and wife dead. Now with a hook for a right hand he goes on an unrelenting search for the killers determined to kill each and every one of them while using his hooked hand as a weapon.

What might’ve been considered violent and groundbreaking back in 1977 seems awfully trite and formulaic now. Paul Schrader’s original screenplay portrayed Rane as a racist and the story culminated with him indiscriminately shooting a group of Mexican’s as a metaphor to America’s involvement in Vietnam, but of course studio execs considered this ‘too edgy’ so everything got watered down and all that gets left is a benign and predictable revenge western updated to the modern-day.

The much ballyhooed violence isn’t all that gripping either. Originally there was a graphic shot that showed a prosthetic hand being sliced up in the disposal, but test audiences became repulsed by it causing the studio execs to take the shot out of the film even though by today’s standards that might not be considered as disturbing as it was back then and might even have given the film some distinction, which it is otherwise lacking.

The scene where the son and mother are killed is poorly handled too because we never see them actually shot as it’s done off camera. This then negates the horror of it and makes it less emotionally compelling with even a quick shot of their bloodied bodies needed for the necessary strong impact. I also thought it was weird that when Rane comes back to the scene of the crime we’re shown the sofa where the two were killed on, but there are no blood stains on it even though most likely there should’ve been.

Devane’s performance is a detriment as well as he is unable to effectively convey the character’s intense, brooding nature. The film would’ve worked better had Tommy Lee Jones, who appears here briefly, been given the lead as he, even in the few scenes that he is in, gives off the required intensity perfectly while Devane is seemingly overwhelmed by the part’s demands making it easy to see why he never became the big screen star that the producers were hoping for.

Linda Hayne’s role was not needed and despite her beauty pretty much just gets in the way. She plays Rane’s girlfriend who begins to date him after his family’s slaughter and tags along with him in tracking the killers, but she tends to be a bit annoying with too many conversations centering around Rane’s need to ‘get over’ his family’s death and seemingly treating his loss like it should be a minor inconvenience that he should simply ‘move on’ from. There is a moment where he seems ready to throw her out of the car and leave her stranded in a field, which would’ve nicely illustrated the character’s obsessed and loner nature, but like with everything else in the film it gets softened by having him dump her later on in a more civil way, which again becomes like a cop-out to the story’s otherwise rough theme.

The shoot-out inside a chapel is pretty good and I really liked James Best as the bad guy with all the sweat pouring down his face, which was apparently accomplished by having him wear ice cubes underneath his hat. Having Devane use his hook to grab, quite literally, Luke Askew by the balls I suppose deserves some kudos too, but overall it’s a bland viewing experience that fails live up to its hype with the whole hooked hand as a weapon concept needing to be played up much more. The movie’s poster makes it seem like it will be a lot cooler flick than it actually is. 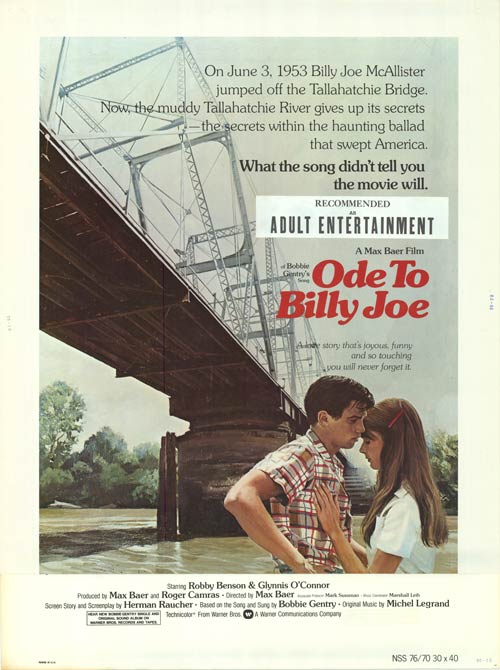 4-Word Review: Where is Billy Joe?

Based on the hit 1967 single sung by Bobbie Gentry this film attempts to reenact what occurred in the ballad as well as explain the song’s mystery elements with a screenplay co-written by Gentry herself. The story centers on Bobbie Lee (Glynnis O’Connor) a 15 year-old girl living on a farm and longing to satisfy her newfound sexual awakenings. She becomes attracted to a local boy named Billy Joe McAllister (Robby Benson) and he to her, but her conservative father (Sandy McPeak) won’t allow her to bring over ‘gentleman callers’ until she is 16, so she runs off into the woods with him only to learn that he harbors a dark secret that if it became known to the public could ruin his life.

While the film did quite well by grossing $27 million at the box office on only a $1.1 million budget I felt it was a mistake to turn the classic song into a movie. Sometimes things are more interesting when the mystery angle is left unanswered, and having it explained especially with the lame way that it gets done here, tarnishes the song’s mystique.

For years Gentry said that the point of the song was never about why Billy Joe jumped off the bridge or what he threw off of it, but instead the relationship of the song’s narrator with her family and how completely oblivious they were to her feelings, which the movie doesn’t recreate. In the song the father is portrayed as being ambivalent and distant towards his daughter and yet in the film for some ill-advised reason he is kindly and connected, which isn’t as interesting.

Hiring Herman Raucher to co-write the screenplay was a mistake as well. He had great success with Summer of ’42, but pretty much tries to turn this into the same glossy romance as that. He even brings along the same composer Michel Legrand whose orchestral score is completely out-of-place with the story’s country setting.

The script also adds some crazy side-stories that have nothing to do with the main plot or the song that it is based on. One of them includes having prostitutes shipped in from nearby Yazoo City to have sex with all men from the town, who line up one-by-one seemingly guilt free, to fuck the ladies while attending a small jamboree. Now, I was not alive during the ‘50s, but I know people who were including my parents, who insist that it was every bit as oppressive and conservative as its reputation states especially in the rural areas such as this film’s setting. I realize that prostitution is considered the ‘world’s oldest profession’ and I’m sure in some underground big city clubs of that period you could find some, but bringing them to some small town where everybody knows everybody else and having the men jumping in for quite literally ‘roll-in-the-hay’ with them (as this took place on a barnyard floor) with all of their friends watching and not worrying that this would get back to their wives or ruining their reputations, as rumors spread like wild fire in small  towns, is just too far-fetched and ridiculous to be believable.

Benson is great in the lead and James Best is strong too in a small, but crucial role, however O’Connor seems miscast. She’s attractive and has been good in other films, but she plays the part as being very outspoken and strong-willed where in the song that same character came off as more introverted and quiet. She also seemed too worldly-wise for a 15-year-old especially one that had never ventured out of her town although the bit where she sticks her head into a toilet bowl and shouts ‘hello’ may be worth a few points to some.

If you spent sleepless nights trying to figure what it was that Billy Joe threw off that Tallahatchie Bridge then you may find this film’s clichéd and corny answer to it as disappointing.  It also takes way too damn long to get there while forcing the viewer sit through many long, drawn-out scenes in-between.

In fact the only thing that the movie does get right is its on-location shooting that was done in LeFlore County, Mississippi that was the actual setting to the song. However, even this gets botched because the Tallahatchie Bridge that Gentry describes in her song, which was near the small town of Money, was destroyed in 1972 and the bridge used in the film was a different one located near the town of Sidon that also ended up getting demolished in 1987.

Posted in 70's Movies, Adolescence/High School, Gay/Lesbian, Movies Based on Songs, Movies that take place in the South, Movies with a rural setting, Mystery