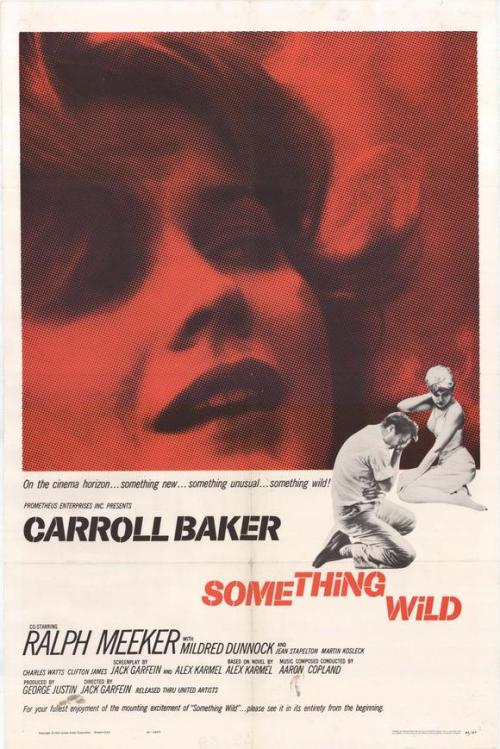 4-Word Review: Rape and its aftermath.

Mary Ann (Carroll Baker) is raped one night while she is walking home from school. For whatever reason she decides not to go to the police and instead keeps the whole incident to herself, but living with her domineering mother (Mildred Dunnock becomes too much and she decides to run away. She finds herself a cheap apartment in a seedy part of the city and a job at a five and dime store. However, the emotional effects of the rape begin to gnaw at her psychologically. She no longer wants to get close to anyone, which alienates her from those around her. She considers suicide, but at the last minute is saved by Mike (Ralph Meeker) who takes her back to his modest basement apartment. There he imprisons her and refuses to let her leave until she falls in love with him.

In some ways this film was ahead-of-its-time. The dazzling opening credit sequence by Saul Bass is eye popping. Director Jack Garfein who at the time was married to Baker and just off of his success of The Strange One continues his push of exploring ideas with dark psychological undertones. The rape scene for its time is surprisingly graphic and the film doesn’t have a single line of dialogue uttered for the first fifteen minutes. New York gets captured in a cinema vertite style reminding me of the influential ‘Naked City’ TV-series that was out at the same time. The black and white photography helps accentuate the story’s grittiness and the surreal dream sequence that Mary Ann has towards the middle of the film is visually creepy and impressive.

Although not the strongest of actresses Baker still manages to give a compelling performance and although she was already pushing 30 she still looked very much like she was 18 or even younger. Meeker an outstanding actor who unfortunately isn’t very well known is solid. The film also offers a great chance to see young stars in the making including Diane Ladd in her film debut as well as Jean Stapelton as Mary Ann’s nosy neighbor and Doris Roberts as a petulant co-worker. There is even Clifton James with a full head of hair.

Unfortunately the film ultimately misses-the-mark and part of the problem is Mary Ann’s decision of not going to the police after she is attacked, which is never explained. This could have been because of the stigma placed on rape victims at the time, but it still comes off as frustrating and even off-putting to the viewer. Mike’s apartment is just a little too bare-bones looking almost like a prison cell instead. Maybe this was the director’s attempt at symbolizing how ‘imprisoned’ Mike and Mary Ann were, but if that was the case it was much too obvious. Realistically someone usually enlivens and personalizes the place where they live by at least putting up a few pictures on the walls. Also, Mary Ann’s doesn’t seem to put up much of an attempt at escaping. Mike locks the door from the inside and then passes out drunk and she could have just gone through his pockets to get the key. She is also left alone for several hours a day while he goes to work, which would have been enough time to cut through the bars on the windows, broken through the door, or even yelled for help out the open window.

Cinematically it has its moments particularly during the first hour, but the story itself seems dated and the character’s motivations confusing and unclear ultimately making it an experimental misfire.

Posted in 60's Movies, Black & White, Drama, Moody/Stylish, Movies Based on Novels, Movies that take place in the Big Apple