A cargo plane flying to Benghazi and piloted by Frank Towns (James Stewart) is forced to make a crash landing in the middle of the Sahara desert when a freak sand storm shuts down the plane’s engines. Of the 14 men on board two are killed instantly when several oil drums break loose during the crash which also injures a third. The rest of the men find themselves stranded in the searing heat with only dates as their food and a 2 week supply of water. The radio communication was destroyed during the crash and they are too far off their main route for anyone to find them. One of the passengers, Heinrich Dorfmann (Hardy Kruger) who works as a plane designer believes he has a way to take what’s left of the wreckage and build it into a new plane, which will then be able to fly the men out of there. Initially everyone else is skeptical, but eventually they begin working during the night to put it together while continuing to fight the elements and themselves in the process.

What makes this film stand out from the rest of the epic adventures is the fact that there is no good guy versus bad guy here. Every one of the individuals has their own unique character flaws and must learn to overcome them and their egos in order to work together as a team. The characterizations are realistic and multi-faceted making their conflicts believable from start to finish and helping to create a story that is gripping on both an adventure level and a psychological one.

Stewart is outstanding in the lead and I enjoyed seeing him play a part that is cynical and savvy and with less of the humble, country boy charm that he is known for. Kruger is solid in support and watching his confrontations with Stewart and then their eventual respect for each is the film’s main highlight. Richard Attenborough is also good as the sort-of moderator between the two and I also enjoyed Peter Finch as the brave and honorable Captain as well as Ronald Fraser as his sergeant who doesn’t quite share his same courage or sense of duty.

I was disappointed to some extent that it wasn’t filmed on-location in the Sahara and instead in Arizona and California although the desert locales look authentic enough even though eventually after two hours it becomes monotonous visually. Director Robert Aldrich keeps things believable including having the men visibly slow down physically as the days wear on as well as growing beards, which is something that sometimes gets overlooked in other stranded dramas although I was still confused why the Finch character formed a goatee instead of a full beard.

The climactic sequence is both nerve-wracking and exhilarating particularly the scene where Stewart tries to start the plane with only 7 cartridges remaining and with each one failing. Whether the logistics of this could actually occur is a big question, but it still remains grand entertainment. 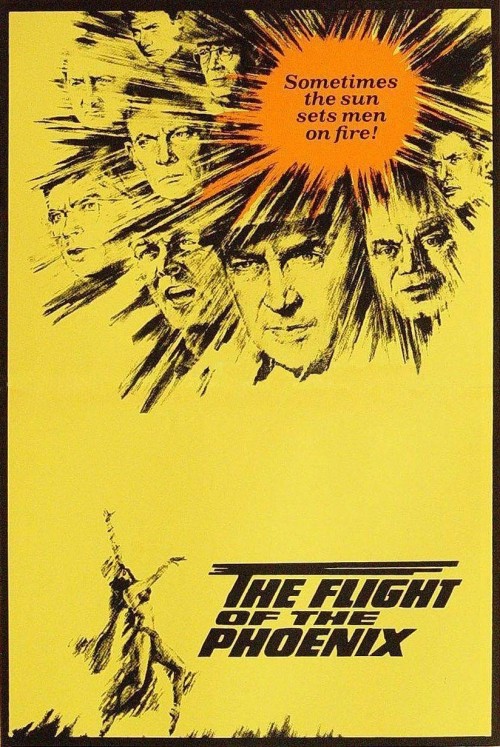