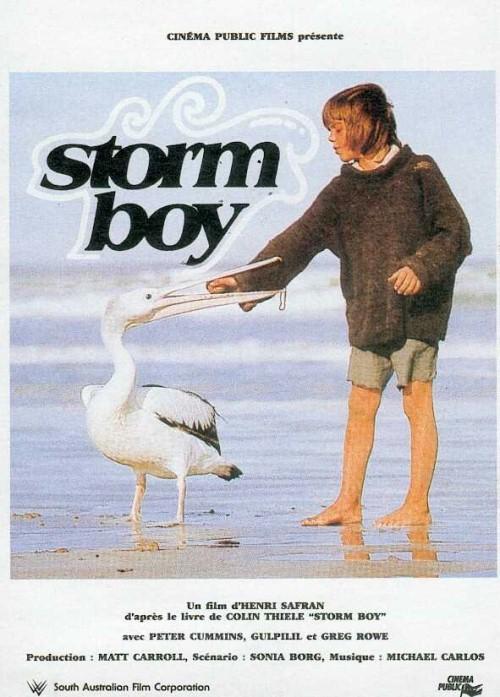 Mike (Greg Rowe) is a 10-year-old boy living in a ramshackle home near the ocean on Australia’s southern coast. He lives with his reclusive father Tom (Peter Cummins) who wants no connection with the outside world and won’t even allow his son to have a radio. One day Mike meets Fingerbone (David Gulpilil) an aborigine living alone on the beach due to a falling out with his tribe. Together they come upon a group of hunters shooting at birds. Fingerbone is able to scare them away, but not before they’re able to shoot and kill a mother pelican leaving her young to die of starvation. Mike decides to take the baby birds home with him and despite his father’s initial objections he’s allowed to keep them. The bird’s require a lot of food, but Mike is able to keep them fed and once they’ve grown he and his father set them free, but one of the bird’s, whose name is Mr. Perceval, comes back and Mike grows a strong bond with him.

The film is based on the children’s book of the same name written by Colin Theile, which won many awards. The film has acquired many legions of fans as well, but filming it proved to be quite complicated. Training the birds took 12-months and many times they’d fly off during the filming including one of them flying into a nearby private party that scared many of the party goers there. They also had the challenge of trying to get the Rowe to interact with the bird as he was initially quite scared of them.

Personally I’ve never found pelicans to be all that cute or lovable and their large beaks are an odd sight second only to that of the toucan’s. I did though enjoy seeing the baby pelicans who don’t even have any feathers on them and was hoping more time would be spent on to their feeding and caring, but the movie glosses over this part pretty quickly.

The bird storyline is in fact only one part of the movie as the script also focuses on several other threads including a local teacher (Judy Dick) trying to get the father to allow Mike to attend school with the rest of the children. There’s also a segment where a bunch of young men in dune buggies come out of nowhere late one night and proceed to tear up, with their vehicles, the home that Mike and his father live in. I suppose the reason this is put in is to show how the bird warns Mike of the impending danger, which gets him out of the house, but otherwise it has no connection to the rest of the plot and it’s left a mystery to what motivated these young men to do it nor are they ever seen or heard of again.

The performances are quite good, which is the one thing that holds it all together. Cummins as the father impressed me the most because he is so different here than any of the other parts he’s played. Gulpilil is entertaining too and has some of the most lines, which is the exact opposite from Walkabout where he had none. Rowe is excellent as well despite the fact that he wears the same clothes the whole way through. Only at the very end is he seen wearing something other than his drab green sweater, but I felt for the sake of body odor he should’ve had a variety of outfits to wear all the way through. I realize they were poor, but even poor people don’t usually wear the same clothes everyday for months on end.

The ending, in which the bird gets shot by a group of hunters, most likely the same ones that killed the bird’s mother, is very predictable, which is the film’s biggest drawback. No real surprises and the life lesson’s are pretty routine and something seen in a lot of children’s stories, so if you take the pelican out of it it’s not all that special. The constant gray, overcast sky gets a bit depressing to look at too, but the film has found a loyal following and was remade to a degree in 2019, where Geoffrey Rush plays a now grown Mike and relating back to his kids about his adventures when he was young. It also stars Gulpilil as the father of Fingerbone Bill.

Posted in 70's Movies, Drama, Foreign Films, Movies Based on Novels, Movies for the Whole Family, Movies from Australia, Movies with a rural setting, Obscure Movies