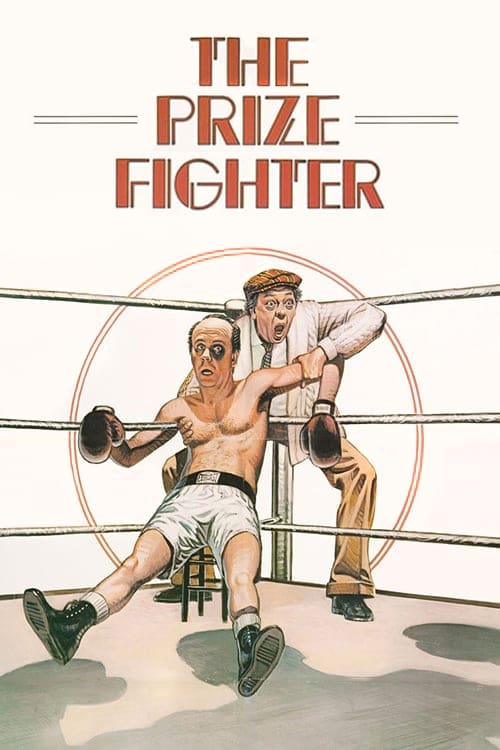 Bags (Tim Conway) is a former boxer who lost all 20 matches that he was in and now helps his former trainer Shakes (Don Knotts) train new fighters, but neither of them is having much luck. Bags decides to go back into the ring during an amateur fight night and this gets the attention of local crime boss Mike (Robin Clarke). Mike is trying to build a convention center, but is stymied by Pop Morgan (David Wayne) who owns a gym on the block Mike wans to build on and he’s refusing to sell at any cost. Mike decides to rig the fights that Bags is in, unbeknownst to both Bags and Shakes, to the extent that it looks like Bags is ‘unbeatable’. He then will entice Pop to bet on the fight that Bags has with the The Butcher (Michael LaGuardia). Pops will be under the presumption it’ll be a ‘safe bet’, but this time Mike won’t rig it and presumably Bags will go down and Mike will be able to get his hands on Pop’s gym and tear it down for his new building.

While Knotts and Conway had success with their pairing in The Apple Dumpling Gang, this foray, an attempted parody of Rocky, goes nowhere. Instead of being filled with a lot of gags and pratfalls, which is what you’d expect, it’s a slow story filled with every cringy cliche from a fight movie out there. Comedy is supposed to make fun of the cliches instead of propping them up, but unfortunately that’s the approach taken and it bombs massively.

Comedy movies should also have all the characters be funny in some way, but here most of them are not. Possibly that was for vanity reasons as Conway, who also wrote the script, didn’t want to be upstaged, but this forces the viewer to go through long periods of trite drama in every scene that he’s not in. The supporting characters are extreme caricatures of the 1930’s which the film is set in. Robin Clarke is particularly annoying (not necessarily his fault as that was just the way the part was written) as he attempts to channel Al Pacino from The Godfather while speaking like a poor man’s Marlon Brando. David Wayne is cast to resemble Burgess Mereridith who was in Rocky (ironically both men played villains in the 60’s ‘Batman’ TV-show with Meredith as the Penguin and Wayne as The Mad Hatter). Here though Wayne speaks, in an effort to sound like Meredith, in a gravely voice that makes him sound like a duck. I also found John Myhers, who co-wrote the script, put-on Irish accent to be equally irritating.

Even Knotts gets wasted. Some enjoy the moment where he cracks a bunch of raw eggs in a glass and then tries to force Conway to drink it, but other than that he doesn’t elicit too many laughs. Yes, Conway is amusing at times, but his perpetually clueless shtick gets a bit old by the end. The only performer that had me laughing was Mary Ellen O’Neill who plays Mike’s senile old mother and who does some wildly bizarre things while in Conway and Knotts’ presence. She’s a scene stealer and should’ve been in it more and while she’s at the boxing match as she watches the fight with Mike she should’ve continued to do weird things while the fight was going on, which outside of swearing she doesn’t, and it was a missed opportunity.

I will give credit for the climatic bout, which is surprisingly well choreographed and effectively has a large crowd watching, which gives it an electric atmosphere, but everything else falls flat. The irony I suppose is that the film ended up being a money-maker and in fact was one of the most successful films released by New World Pictures, but I think this was mainly because a lot of people went to it based off the reputations of the two stars more than the movie itself being good. I remember I went with my dad and two siblings to see it at the local theater because we were fans of Conway and Knotts, but all of us, our dad included, were quite bored and went home unimpressed and it clearly hasn’t improved with age. 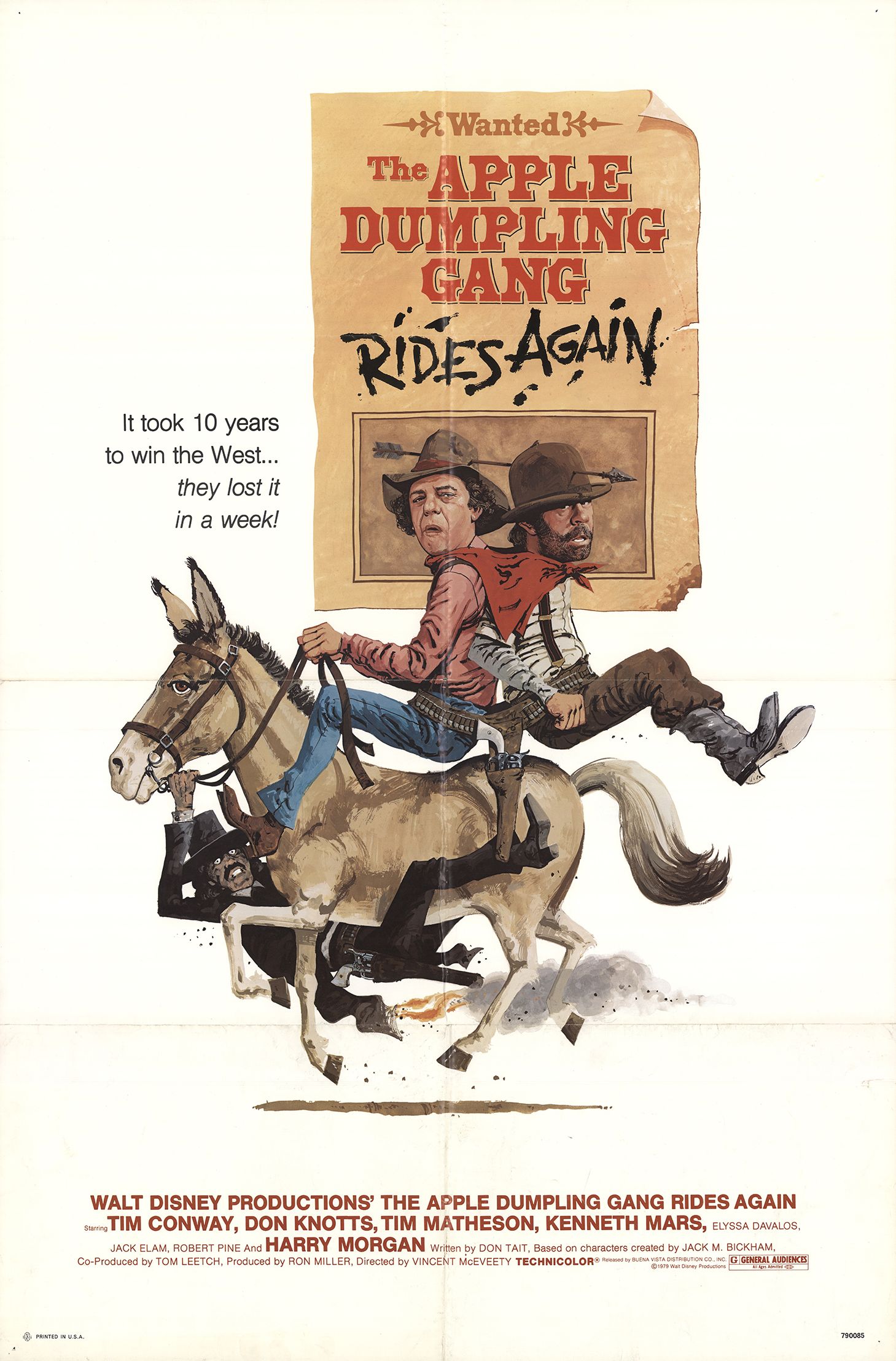 Amos and Theodore (Tim Conway, Don Knotts) are two former members of an outlaw gang who are now trying to go straight, but as they enter the western boom town of Junction City they find their hopes of living life free of their old criminal ways to be dashed when they get mistakenly accused of robbing the town’s bank. They go on the run from the town’s relentless sheriff (Kenneth Mars) by enlisting in the United States Calvary, but accidentally cause a fire there that ends up burning the whole fort down and getting them into even more trouble.

This very weak sequel to  The Apple Dumpling Gang, has little to recommend and barely any connection to the first one. Besides Knotts and Conway no one from the original cast appears here except for Harry Morgan who plays an entirely different character. It was also the kids in the first film that were called the Apple Dumpling gang and not the two bumbling men, which just cements how unnecessary this film really is.

It’s not like any of the cast from the original film was all that memorable, but they at least helped balance the story from being just one long inane slapstick act, which is all you end up getting here. Knotts and Conway can be good comic relief in brief sporadic spurts, but trying to tie a whole movie around their bumbling act makes it quite one-dimensional.

The supporting cast isn’t any good either with Tim Matheson as bland and transparent as ever as a heroic officer and his romance with the feisty Elyssa Davalos is formulaic and cliched to the extreme. Mars goes overboard with the arrogant sheriff who goes crazy act until it becomes just as annoying and overdone as everything else in the film.

I’ll admit as a child I thought this movie was entertaining, but as an adult I got bored almost immediately despite finding the first installment to be genuinely enjoyable. Part of the problem is that the first one was based on a novel and had an actual story mixed in with the gags while this one is centered exclusively on extreme coincidences to help propel its thin plot along while throwing in slapstick bits that are predictable and unoriginal.

The only thing that surprised me at all was seeing Conway get top billing even though Knotts displayed a wider acting range while Conway merely stands around looking perpetually befuddled. Knotts also had the majority of lines and a little more dimension to his comedy while Conway just acts like a cross-eyed dope, which to me got boring real fast.

I understand that these films have a certain nostalgic appeal for those adults who remember watching it as a kid, but I honestly think that appeal will wear off quickly after about 5 minutes. If you’re under 10 you may like it better, but others should beware. 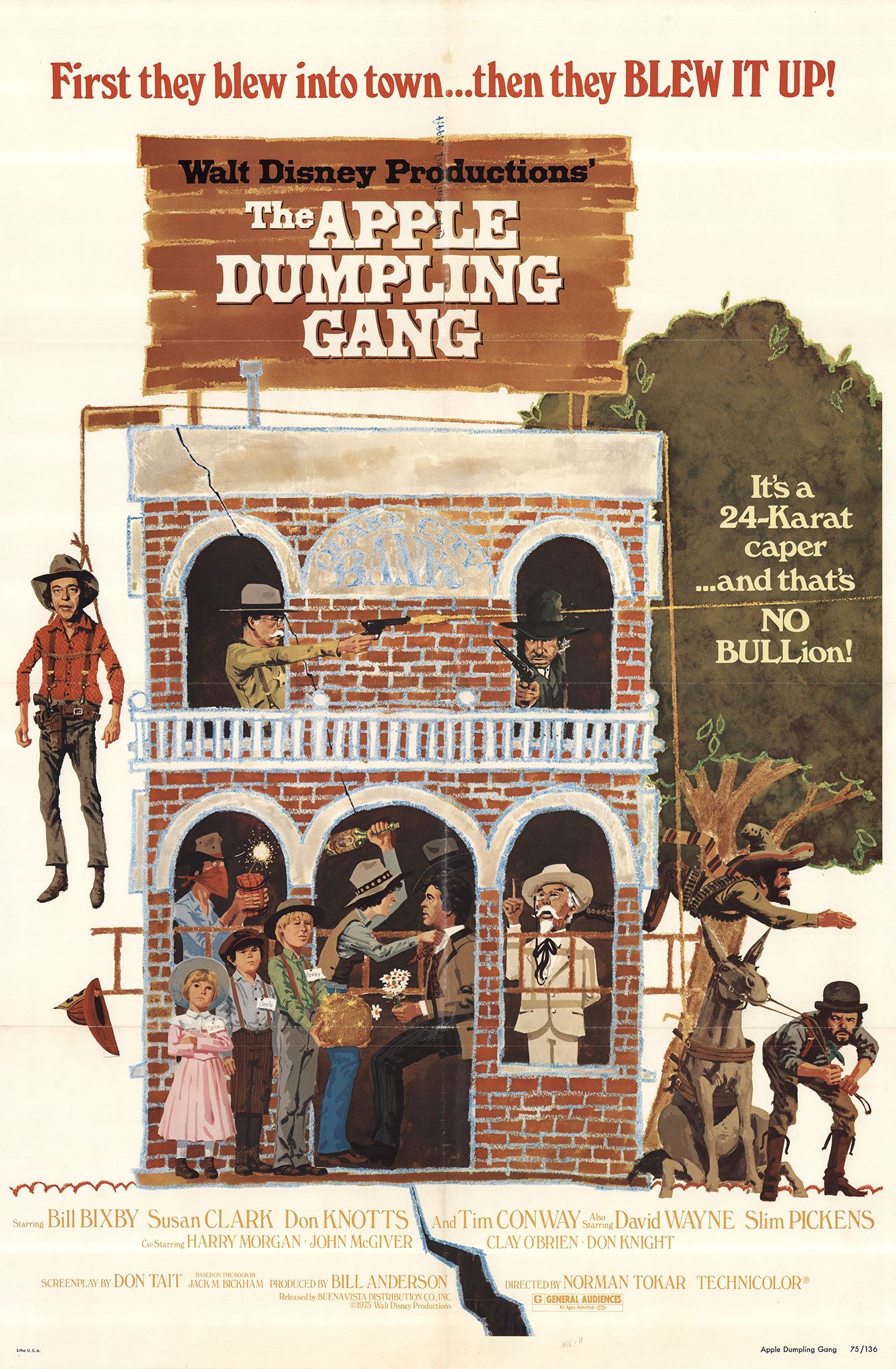 Russell (Bill Bixby) is a slick gambler living in the old West who finds that he has unwittingly become the guardian to three orphaned children ( Clay O’Brien, Brad Savage, Stacy Manning). Initially he tries to pawn them off on other people, but eventually he takes a liking to them when he realizes that they’ve inherited a mine that has gold in it, which soon makes everyone else in town want to adopt them.

This Disney film, which was based on the 1971 Jack Bickham novel of the same name, fares better than most of their other films and in fact became its biggest money maker from the 70’s. It helps that the main character of Russell isn’t as squeaky clean as the typical Disney leading man as it’s strongly implied that he cheats at the poker games that he wins and the fact that he gradually softens towards the kids through time creates a nice character arch. Susan Clark, who’s the love interest, is good here too as she plays against type for a Disney leading lady by being more tom boyish and masculine despite the fact that apparently behind-the-scenes she was scared to death of horses and every scene that required her to ride one had her instead on a mechanical one although you could never tell.

The typical Disney comical trappings are given a unique spin here too, which also helps. Instead of having another boring barroom brawl, which is so common in many western comedies, we are treated to a funny lovers spat between Clark and Bixby inside the bar where props get thrown around between the two while everyone else sits frozen and unsure of what to do. There’s no cartoonish car chase at the end either, but instead a genuinely hair-raising battle between Bixby and Slim Pickens, who plays one of the bad guys, down the white rapids of a river. The shooting was also done on-location at Deschutes National Forest in Oregon, which improves the setting from the usual studio back lot.

Even the kids are tolerable without having their cuteness or innocence get overdone even though the running joke dealing with the young girl constantly having to go pee isn’t as funny as it seems when you think about it and most likely in reality would’ve been a warning sign of a very serious medical condition instead. Also, the scene showing the kids getting trapped in the mine after an earthquake should’ve also shown how they were able to get out instead of simply cutting to the next scene with them back in town of it without any explanation as to how they got there.

The real stars of the film though are Don Knotts and Tim Conway as the comically bumbling would-be crooks. This marked the first of five film appearances that the two did together and in many ways this is probably their best effort. I always liked seeing them together because it was a rare chance for Knotts to play the smarter of the two instead of always being the dope himself although some may find Conway’s extreme ineptness more annoying than funny. In either event they help enliven the proceedings and became the stars of the sequel The Apple Dumpling Gang Rides Again, which will be reviewed next week.