Amateur Night at the Dixie Bar and Grill (1979) 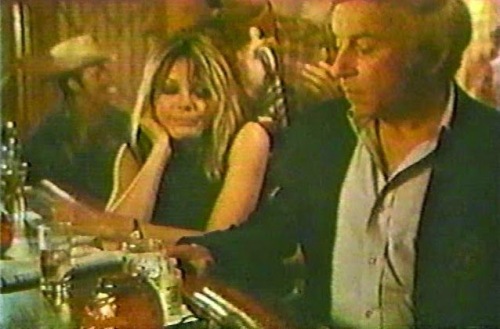 A bar on the outskirts of a nameless small town becomes the social setting for a group of everyday people who flock to it one night in hopes of winning an amateur act contest. Every one of the contestants is fighting some inner demon or insecurity and critiqued by a judge (Henry Gibson) that is being bribed by different parties to choose their candidate over the others. There’s also a dangerous serial killer lurking about known as the Disco Killer, who has shot up several other venues in the area and may be eyeing the Dixie bar as his next target.

This TV-movie, which was written and directed by Joel Schumacher, seems way too similar to Robert Altman’s Nashville to be considered original. Clearly that film was this movie’s inspiration and this one does not go far enough with the concept and would’ve been better had its runtime been extended and the characters more fleshed out. Certain actors, such as Don Johnson and Candy Clark, are underused and there’s not enough of an understanding of the town that the bar was in. Some shots of rundown buildings in an isolated area would’ve helped give the viewer a better feel for how bored these people were and why they would be motivated to go on stage and essentially make fools of themselves just for the lofty chance at somehow escaping their otherwise hopeless existence with a small shot at fame.

What I did like is that the entire story takes place in one setting. The only time the camera ventures outside of the cramped place is when it goes into its parking lot for brief periods, but otherwise this bar is the center of the universe for these characters, which for many small town people, especially before the advent of the internet, is what bars such as these represented.

The stage acts themselves were a bit disappointing and could’ve been played-up more as I was expecting something a little more along the lines of stuff seen on the old Gong Show or stupid human tricks from David Letterman. The scene where a big fight breaks out in a dressing room that is far more exciting than anything occurring on stage does allow for some irony and the part where actor Rick Hurst attempts to crack open a coconut by using nothing more than his bare teeth is engaging, but more acts in this vein was needed.

Having Tanya Tucker appear as this shy woman who lacks confidence despite possessing the talent and walks off the stage in humiliation at the start only to redeem herself later, is too manufactured. I much preferred Pat Ast as this homely, overweight woman who unexpectedly wows everyone with some rousing showstopping numbers that should’ve made her the winner instead. I also felt that the so-called prize, which was simply the privilege to appear on stage at that same bar for two straight weeks, was too skimpy. People have bigger dreams than that even in a dusty small town and want more of a reward like  a trip to Hollywood, New York or a contract with an agent in order for them to be excited enough to go through what they do.

There is also no payoff to the Disco Killer storyline. He gets discussed quite a bit and there are even TV news reports about him, but then he never appears, which feels like a letdown. I’m not saying there needed to be a bloody sequence where a killer shoots people dead, but maybe a scenario where the contestants, who are quite competitive with one another otherwise, manage to come together enough to subdue the bad guy, or some other lighthearted element that would’ve at least brought a conclusion to the subplot instead of just letting it hang.

Sheree North as an embittered alcoholic easily steals it and has some of the best lines. There is also a long tracking shot in which the camera starts out at the back of the bar and then slowly weaves its way up onto the stage that is great too. The film certainly has its share of moments and as a TV-Movie it’s impressive, but lacks finesse for the big screen. 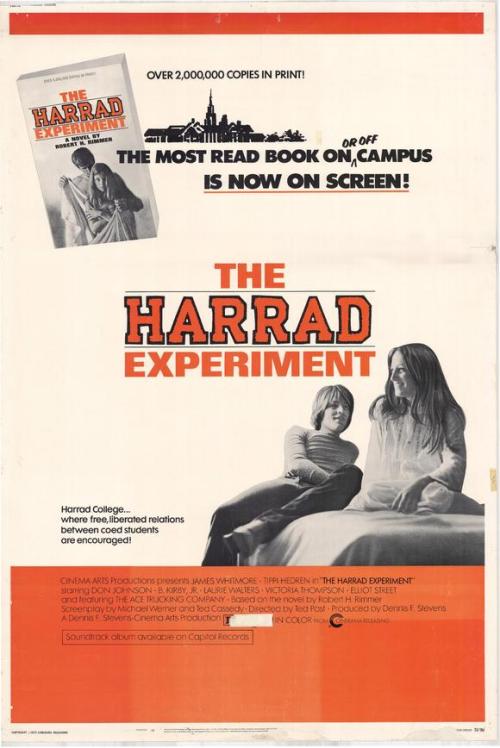 Based on the novel by Robert H. Rimmer the story centers on a group of students who attend a socially progressive college where sex between multiple partners is expected and promoted. The school is run by Phillip and Margaret (James Whitmore, Tippi Hedren) who feel conventional marriage is an unrealistic ideal that creates the idea of ‘ownership’ over someone else, which in turn causes jealousy. They hope to end these problems and change the cultural norms by having the next generation accept more of a group marriage mentality.

The film nicely avoids the smarmy T&A factor by portraying nudity in a natural non exploitative way while also having characters that are believable and a good representation of the young generation from that era. The different ways that the students respond to the unique environment and the realization that they aren’t quite as sexually liberated as they thought remains the story’s focal point of interest.

The film also allows for a great chance to see young stars in the making. Laurie Walters, who later went on to star in the TV-show ‘Eight is Enough’, gives a sensitive portrayal of a young woman who’s still shy about her body and not quite ready to enjoy sex outside of the bounds of romance as she had initially thought. Bruno Kirby is good as well playing a student who’s so filled with insecurities that it prevents him from having any sex at all. Don Johnson though gives the best performance as a cocky student who uses the program simply as a way to ‘score’ with women only to later learn that even he needs some emotional bonding too.

The always reliable Whitmore is solid as the stoic instructor and Hedren gets one of her best roles outside of her most famous one in The Birds with her titillating moment coming near the end when she strips off her clothes and tries to entice Johnson to make love to her right out in the open and in front of everyone. Actor Ted Cassidy, who co-wrote the script, can also be seen briefly sitting at the counter of the local café.

Although the film does manage to bring out a few provocative elements I still felt even without having read the novel that is was only skimming the surface. Having the story focus on only a few of the couples isn’t as captivating as it could’ve been had it instead taken a broader look at all of the students. The low budget gives the production a cheap look and a few too many sappy love songs get thrown in an attempt to turn it into a ‘70s romance instead of keeping it more of a psychological drama that it should’ve been.

A sequel called Harrad Summer, which follows these same students who take what they’ve learned and try to implement it into their adult lives, was released one year later and that will be reviewed later on this week.

The Magic Garden of Stanley Sweetheart (1970) 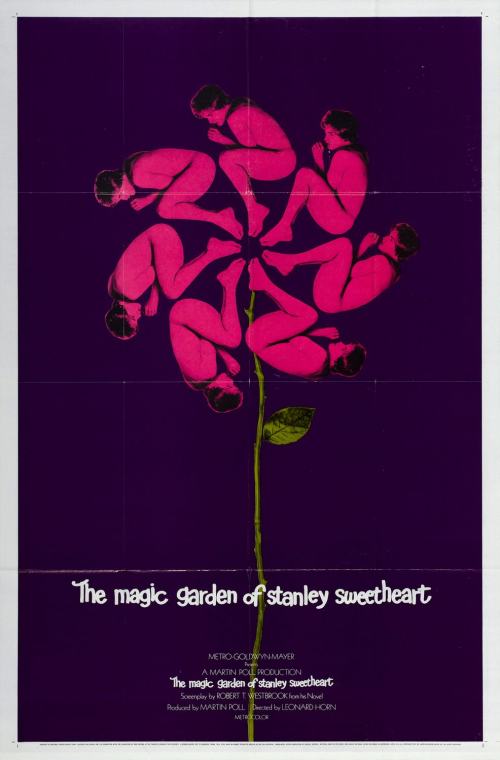 Based on the novel by Robert T. Westbrook who also wrote the screenplay the film centers on Stanley (Don Johnson in his film debut) an underground filmmaker living in an apartment that is almost continually bombarded with the noise of a construction site next door. He has big dreams and ambitions, but at times seems awkward and unsure of himself. He meets Cathy (Dianne Hull) who he initially is just interested in for sex, but then he starts to fall-in-love with her and when she breaks up with him he finds it hard to handle.

The movie starts out well. I enjoyed the free-style direction and narrative. Cutting back and forth showing things as they are versus how Stanley would like them to be is fun, but the film deviates away from this when it would have been more interesting had it stayed this course all the way through. There is a certain element of one of Andy Warhol’s anti-movie movies here where the film tries to challenge the viewer’s conventional understanding of protagonists, plot, character development and all around narrative structure and it is no surprise that Warhol really liked this movie. It does have a strong cinema vertite approach that gives you a feeling like you are right there with the characters and to a certain extent helps bring the 60’s back to life.

Unfortunately the direction is too lackadaisical and unfocused and the story is uninteresting. Looking more at Stanley’s underground films could have given it a little more bite, but we only get a glimpse of one of his movies and then that thread is pretty much forgotten. The second half of the film centers on Stanley’s relationship and ultimate break-up with Cathy, which is too contrived and does not compliment the film’s otherwise offbeat approach. Funky and irreverent moments of humor are lost with a storyline that doesn’t seem to know where it wants to go or what to say. Tighter editing could’ve helped avoid some long stretches where nothing seems to happen.

Don Johnson is excellent and the one thing that keeps this wandering film together and he can be seen totally nude from both the front and back. Hull allows for some diversion as a sheltered young lady who is initially shocked by the open sexuality around her, but eventually learns to embrace it. Native American actress Victoria Racimo is hot with her clothes on and off and reminded me a lot of 70’s adult film star Hypathia Lee. Brandon Maggart makes the most of his small bit as a gay man trying to come onto Stanley while inside a café. Michael Greer offers some edginess as Stanley’s slightly menacing friend Danny. His violent death that occurs near the end of the film and in front of his shocked mother does leave an impression, but we don’t know enough about the character for it to make much sense and just another thing put into the film without seemingly much thought.