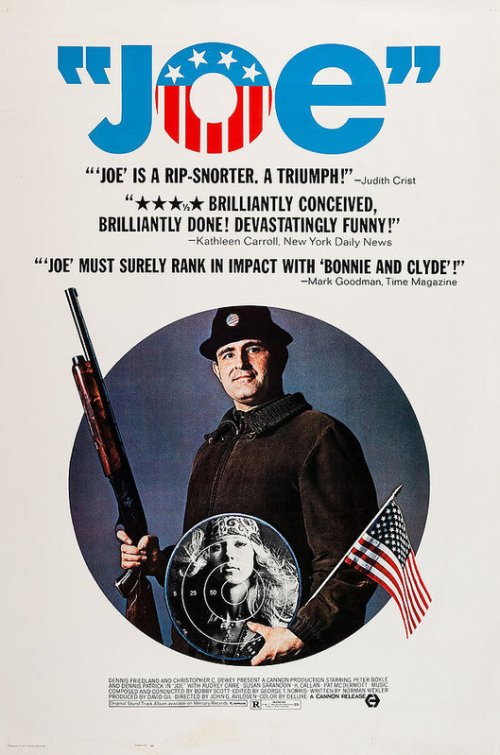 Joe Curran (Peter Boyle) is an unhappy factory worker who feels the blacks, liberals, and hippies are ruining the country and doesn’t mind telling all the patrons at his local bar exactly what he thinks. One night while going on another one of his racist rants he meets Bill (Dennis Patrick) a successful businessman who’s the father of Melissa (Susan Sarandon) who was put into the hospital for a heroin overdose. Earlier that day in a fit of rage Bill had killed her live-in boyfriend Frank ( Patrick McDermott) who was the one that got Melissa hooked on the drug. Now, as he sits at the bar in a drunken state he admits to Joe what he did and Joe uses this newfound knowledge to become friends with Bill and find out how the other half lives. Bill initially dislikes Joe and only stays friends with him because he’s afraid Joe will go to the police otherwise, but after awhile the two men start to share a weird bond, which eventually leads them both to the dark side.

Norman Wexler’s script manages to bring out the paradox of the American social hierarchy quite well and in many ways far better than most other better known dramas of the same subject. While the role was originally intended for Lawrence Tierney, who would’ve been a better choice due to being more age appropriate, Boyle, in his first starring role, shines as a younger version of Archie Bunker and manages to do it in a way that still keeps him human and dryly humorous.

The film’s major defect though is with Dennis Patrick’s character who is too bland and one-dimensional and walks around with the same nervous look on his face throughout. Having him become the main character and receive the biggest story arch does not help since he’s too transparent causing his personality change to be uninteresting and there needed to be a backstory in order to give him more depth. I also felt his relationship with his wife (Audrey Caire) needed fleshing-out and the scene where he admits to the murder to her and her reaction to this news needed to be shown.

While John G. Avildsen’s direction has some flair his selection of music for the soundtrack, which includes a droning, melodic piece by Jerry Butler during the opening credits, was too low key and doesn’t reflect the edgy, angry tone of the story. The scene where several people get shot inside an isolated home is poorly handled because no special effects get used. The victims just immediately collapse to the ground after being shot, almost like children pretending to get killed while playing cops-and-robbers, with no blood splatter or gun smoke, which makes it too fake looking and weakens the overall emotional effect.

Having Patrick able to kill the boyfriend so easily is unconvincing too. The boyfriend was far younger and bigger than Patrick, so having him die by simply getting the back of his head hit against a wall without putting up any fight comes off as pathetic and the struggle should’ve been much more prolonged and played-out. I also didn’t like the editing effects were the film repeats the shot of the head hitting the wall, which is too stylized in a film that otherwise was trying to be gritty and realistic.

The twist ending though is nifty and almost makes it worth sitting through. It’s also a great to see Susan Sarandon in her film debut. She looks pretty much the same as she does now, but her eyes for some reason look bigger here and more pronounced on her face. She gives a good performance as always and even jumps fully naked into a bathtub with her boyfriend to start things off.