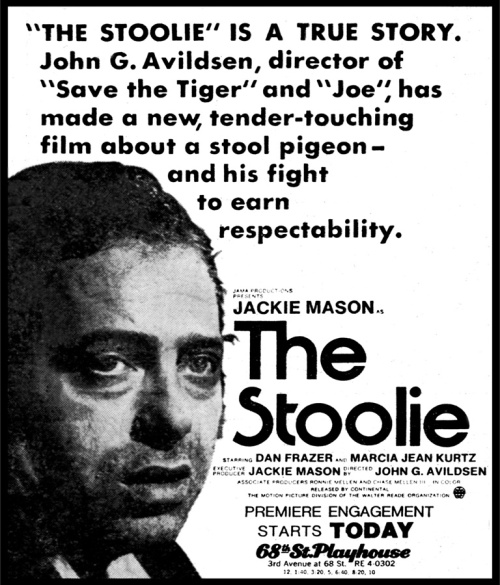 Roger (Jackie Mason) is a small time crook who works with Police Detective Alex (Dan Frazier) to trap other thieves by using bait money that Alex gives to him in other to set-up criminal deals that will eventually lead to their arrest. Roger though feels he’s shown little respect giving him the gumption to take the bait money and run off with it to Miami. Alex relentlessly chases after him, but finds many obstacles while Roger meets-up with a lonely woman named Sheila (Marcia Jean Kurtz) who was ready to jump off a bridge until he talked her out of it. The two eventually fall-in-love and get married only to have Alex appear at their door demanding his bait money back, which Roger has already spent forcing him to come-up with other underhanded ways to steal it back.

This was Mason’s film debut in what has amounted to being a very short-lived film career with only two other starring vehicles to his resume that were spread far apart and include the critically panned Caddyshcack II in 1988, and then Goldberg – P.I. in 2011. While Mason was already an established nightclub comedian at the time his foray into television had been rocky including the infamous ‘Middle Finger incident’ on the October 18, 1964 live broadcast of the ‘Ed Sullivan Show’ that got him banned from appearing on it and effectively blacklisted from going on other shows or movies. While his humor and outspoken politics have made him an acquired taste he comes off here as not only likable, but genuinely endearing. Director John G. Avildsen manages to use Mason’s frumpy physique to his advantage creating a lovable loser type that makes the viewer want to cheer him on from start to finish and really the only reason why this otherwise oddball film is able to work.

Initially I wasn’t sure if the love angle that gets thrown-in halfway through would appeal quite as well, but fortunately Kurtz acts as Mason’s female counterpart even sporting the same curly mop-top making their romance seem organic. I enjoyed too that the after their first meet it doesn’t suddenly cut to showing them immediately in bed together like in so many other 70’s movies, but instead having them touring a parrot farm. In fact the Florida locations get captured well here as Avildsen stays away from the chic side while delving more into it’s emptiness where lonely souls come looking for some happiness.

Frazier is effective and the second act in which the film cuts back and forth between Mason living it up and Frazer doggedly chasing after him is where it gels, but the minute the two get back together it bogs down as there’s no chemistry between them. Mason becomes too much of a passive observer watching Frazier doing all the scheming, but the hero needs to be the one propelling the action. While the charm remains it’s not as strong by the end and the film would’ve been better served had it stayed with the cat-and-mouse theme.