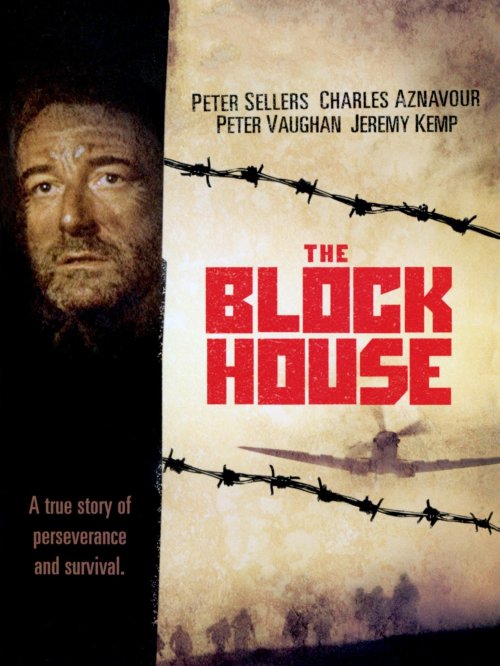 4-Word Review: There’s no way out.

On D-Day a group of war prisoners on an island that’s run by German soldiers seek shelter from an allied air attack by finding refuge in an underground German bunker, but once inside, they realize to their horror that the shelling outside has blocked-off both the entrance and exit, which essentially traps them in permanently. They are fortunate enough to find a supply room full of enough food and wine to keep them fed for a long time, but as the days wear into weeks and then months and even years they grow tired and despondent about their situation. They try to find ways to break through the cement walls, but their attempts prove futile, which leads all of them into a mental and emotional breakdown.

The film is best known as being one of Peter Seller’s rare dramatic turns where he plays a character that is not funny or colorful. Normally his performances are quite flamboyant and over-the-top and he tends to dominate the spotlight, but here he blends in with the rest of the performers with a rare low-key portrayal that is quite impressive when given how he normally acts. This was yet another project he got involved in during the early 70’s when his career was on the down side and he was desperately taking just about any offer that came along, no matter what the quality, in an effort to bring in money. While some of those movies that he starred in during that period were truly awful (i.e. Where Does it Hurt?) this one, despite its grim theme, is unique and worth checking out particularly for those who enjoy experimental cinema.

The film was directed by Clive Rees, whose only other cinematic directorial effort was When the Wales Came, which had a similar theme about an eccentric man living an isolated existence on an island. While Rees is not as well known as Stanley Kubrick, Sellers insisted in interviews, that he was ‘every bit as good’.  While this statement may seem like an exaggeration I was quite taken aback by the gritty realism and the way the viewer feels just as trapped as the victims. The actors give all-around great performances and you see their character’s ultimate mental decline happen right before your eyes, which is both vivid and gut-wrenching. The story also looks at all aspects of their deterioration where they start to do things they had never done before including conveying certain homo-erotic elements. While none of this gets shown I was still impressed that it at least got lightly touched-on as I feared due to the period and heavy UK censorship, where this film was made, that would be one facet that couldn’t get introduced, but ultimately in a soft way it does.

If you’re looking for an entertaining crowd pleaser than this movie won’t be it. As Sellers rightly stated in his interview it’s meant for serious ‘connoisseur’s of cinema’ only. TV Guide complained that the film in their review ‘goes nowhere’ and it doesn’t reveal a ‘metaphysical reason’ for the character’s predicament, but I really didn’t think one was needed. Sometimes shit just happens and people must learn to adapt to their new harsh reality, or fall apart and in that vein I felt the movie does an excellent job and goes much further into this dark, murky psychological realm than most others would dare.

The story is based on the 1955 novel of the same name by Jean-Paul Clebert, who also coincidentally lived an isolated existence for many years in an abandoned village. The novel is loosely based on the actual incident that occurred on June 25, 1951 when two German soldiers in Poland were rescued from an underground shelter that they had been trapped in for 6 years. The difference is that in the movie we never see the rescue as it ends with the remaining two survivors stuck in total darkness when the last of their candles goes out. I felt it would’ve worked better had the rescue been shown as well as a better build-up where we would’ve gotten to the know the men better in the prison camp before they were forced underground, which would’ve made their mental declines even more interesting.