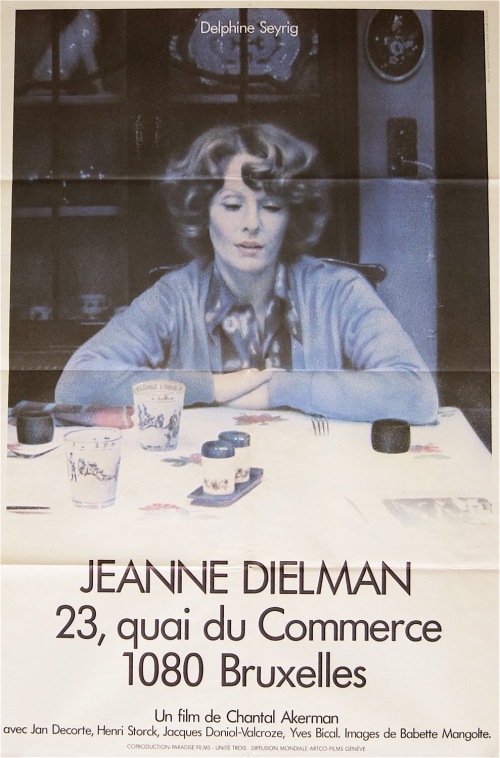 This is a highly unusual film which analyzes in minute detail the monotonous tasks that a single mother performs throughout her day and was apparently inspired by writer/director Chantal Ackerman growing up with a mother who suffered from obsessive/compulsive disorder. The story centers on Jeanne (Delphine Seyrig) a woman raising a teenage son while living in a tiny one-bedroom apartment in Belgium. During the day she entertains various men with sexual services and uses the money that she receives for this to help maintain things for both herself and her teenage son Sylvain (Jan Decorte). When she is not working as a prostitute she is busily cooking and cleaning, but as each day passes her routine becomes sloppier, which is a subconscious signal that something is bothering her and only at the very end does the viewer find out what it is.

For instance when we watch Jeanne wash her dishes the camera does it in a very static way from behind her instead of doing something flashy like a close-up of the water glistening of the dish, or from some other provocative angle. Akerman has stated that she took this approach in order to show respect to her character’s ‘personal space’, but this only ends up giving it a closed-circuit TV feel.

Nonetheless I still remained strangely intrigued, but I’m not sure if this was because of some reviews I read beforehand where I was told that about the ‘surprise/shocking ending’ that would somehow make what I was watching all seem worth it, or because of what I was actually going on. I’ll agree that seeing the way she prepares and cooks her various meals is fascinating, but it’s for all the wrong reasons as you become more caught up in the task itself than the character and to say that one’s mind doesn’t eventually begin to wander after 3 hours and 20 minutes of this would be an understatement.

The 3-day arch that she goes through from where she performs her tasks proficiently on the first day only to screw them up more and more by the third one needed to be much more apparent as her ‘screw-ups’, like dropping a newly washed spoon on the floor, are too subtle and not enough of a payoff. Cinema is still a visual and dramatic art form and yet this film runs away from that at every conceivable turn making it seem more like an assault on one’s stamina instead.

The only true cinematic moment comes at the very end when Jeanne kills one of her male clients, but there’s no reason given for why she does this or what the aftermath will be. To have to sit through all that comes before it just to walk away with unanswered questions is frustrating and almost like being told a joke where the punchline is not an equal payoff to the long, tangent-filled set-up that it took to get there. I like the concept, which is intriguing, but it could’ve been accomplished in half the runtime making this an interesting experiment that can be appreciated as an oddity, but nothing more than that.