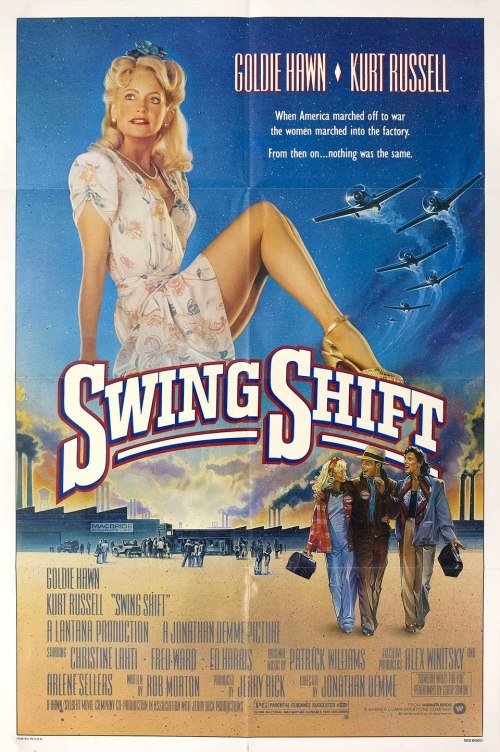 Kay (Goldie Hawn) lives with her husband Jack (Ed Harris) in a housing complex in Los Angeles and have a happy marriage until December 7, 1941 when the Japanese bomb Pearl Harbor, which causes Jack to immediately enlist into the Navy and go off to war. Kay now must learn to manage for herself and with the shortage of men many companies begin recruiting area housewives to apply to help fill-in. Kay, along with the other women in her neighborhood, get a job at a factory that builds aircrafts. It’s here that she becomes friends with Hazel (Christine Lahti) who lived next door to her, but she never got to know since her husband considered Hazel to be ‘white trash’. She also meets a fellow co-worker named Lucky (Kurt Russell) who was not drafted due to a heart condition. Lucky takes an immediate liking to her and asks her out even though he knows that she’s married. Kay at first resists his advances, but eventually gives in and starts an affair with him just as Jack returns home.

The film does a good job of recreating the 40’s period atmosphere and there’s an opening catchy tune sung by Carly Simon, but everything else is dull and boring. Many people blame this on Hawn who did not get along with director Jonathan Demme and insisted on many scenes being reshot with another director. Demme was so incensed about the changes that he tried to have his name removed from the credits, but was talked out of it while Nancy Dowd, who had written the screenplay, got listed under the pseudonym of Rob Morton. Hawn’s defense for going against the objections of the director was that she was simply trying to ‘make the movie work’, but in 2017 the magazine Sight and Sound compared Demme’s director’s cut to Hawn’s version and the article’s authors felt that Demme’s was far superior.

This is also where Russell and Hawn first met and precipitated their long relationship that they’re still in today, which is great, but Russell’s character was one of the biggest problems. He continually pesters Kay for a date even after she makes clear several times that she’s married and isn’t interested, which makes him come-off like a potential stalker. I also didn’t understand why he was so obsessed with her, sure she was good-looking, but so was he and he moonlight as a trumpeter at a dance club where he was the center of attention and could easily attract other women, so why get so hyper-focused with Kay when he could easily find many other pretty ladies to date in her place? I also didn’t like that Kay eventually goes to bed with him, which ends up rewarding his bad behavior.

Kay’s relationship with Hazel doesn’t work either. Initially they come-off as having wildly divergent personalities and lifestyles, Hazel is even quite snarky with Kay at the start, but then overnight they become best chums, which isn’t interesting, or authentic. The odd couple-like love/hate approach would’ve offered more zing in a movie that’s too tranquil to begin with. Much of this may be blamed on Hawn as well, as she felt Lahti had become too much of a ‘scene stealer’ and had many of her scenes either rewritten or cut-out completely.

It would’ve worked better had it focused more on the job and women trying to make-it in what was at the time a predominantly man’s world. There are some moments of sexism shown particularly with the character played by Charles Napier, but it gets quickly resolved, which is too convenient and misses out on being a character building drama that this movie was in desperate need of.