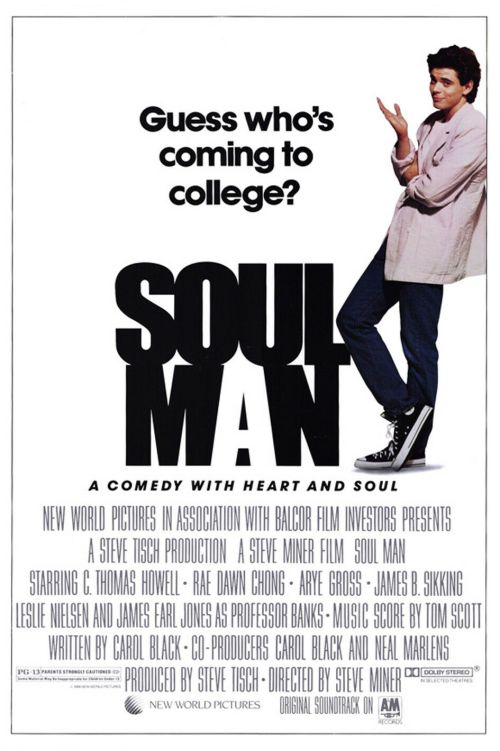 4-Word Review: Pretending to be black.

Mark Watson (C. Thomas Howell) has been accepted into Harvard Law School, but just before he’s ready to attend his father (James B. Sikking) states that he won’t help to pay for it forcing Mark to try and find other avenues of funding. He eventually decides to take some tanning pills, which makes his skin darker and then apply for a scholarship only available to African American students. After getting the money he continues with the charade, but encounters many problems along the way that he wasn’t expecting.

This is one comedy that hasn’t aged well at all. At the time of its release it wasn’t considered too great to begin with and I avoided it, but now almost 30 years later the blackface plot line has made it a bad stain on the careers of those involved particularly the producer, writer and director who were all white and apparently thought they were ‘woke’ and making something ‘socially relevant’, but really weren’t. However, even if you get past the politically incorrect scenario this is still a really bad movie either way.

The basic premise is the biggest problem as Howell never ever effectively looks black, Egyptian maybe, but more like some white guy wearing a tacky wig and who stayed under the sun lamp too long. The fact that anyone could believe that he was really black for even a second is patently absurd as his skin is more of a dark beige color and his other facial features never change, which makes the scene where his own parents don’t even recognize him all the more stupid.

The idea of having him intentionally overdose on tanning pills just brings up even more questions. For instance if he takes more than the recommended dosage wouldn’t that cause some dangerous side effect and how exactly is he able to turn white again at the end as overdosing on the pills would’ve most likely have caused some sort of long term health risk to either his system or skin.

The fact that he’s able to get the scholarship right away is pretty ridiculous too. Don’t applicants have to go through some sort of background check before they get accepted or do they simply get handed the money the minute they walk in and ask for it like it seems here and wouldn’t this background check then expose that he was really white?

This also has to be the dumbest guy ever to get accepted into Harvard. I’m not saying the character has to necessarily conform to the nerd stereotype, but the guy comes off like a world class slacker from the beginning who proceeds to say and do one clueless thing after another until you wonder if he’d ever be accepted into junior college let alone an Ivy League one.

James Earl Jones’ performance, where he channels the black version of Professor Kingsfield from The Paper Chase, is one of the film’s few bright spots. I also enjoyed Rae Dawn Chong who plays Howell’s potential love interest and who comes off as far more real and multi-dimensional than any of the other characters in the film to the point that she should’ve been made the star while scrapping Howell and his silly shenanigans completely.

Not only does the film fail to offer any true meaningful insight into race relations, but it manages to stereotype white people in the process particularly the two white male students who are constantly getting caught making racist jokes about black people. Is the viewer actually supposed to believe that this is all these two guys ever talk about as it certainly is made to seem that way, which is just one more example as to why this has to be one of the clumsiest, most unfunny and most poorly thought out satires ever made. 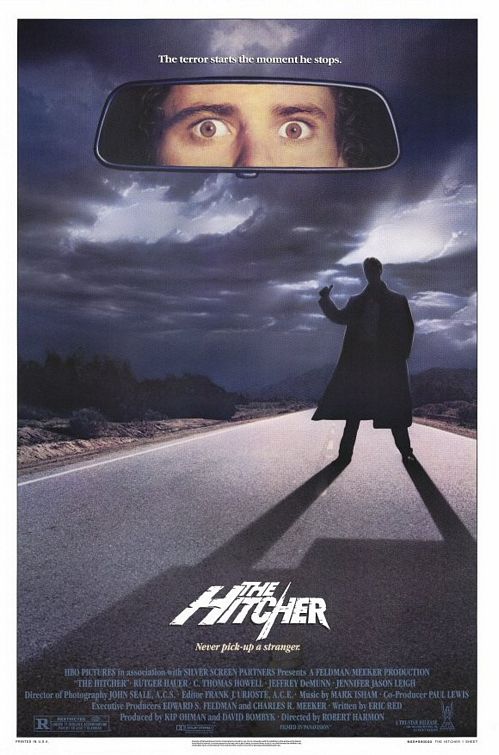 Jim Halsey (C. Thomas Howell) who is driving from Chicago to California finds himself falling asleep at the wheel as he travels late at night down a lonely desert highway. To keep himself awake he decides to pick-up a hitchhiker named John Ryder (Rutger Hauer) who immediately begins to behave strangely. Jim manages physically kick John out of the car when his life gets threatened, but then notices that he is continually coming upon him as his drive progresses. Soon the police are after him thinking that he is the one committing the murders that are really being done by John.

This film manages to be a nice blend between Spielberg’s TV-movie Duel and the classic episode of ‘The Twilight Zone’ in which Inger Stevens constantly sees the same hitchhiker as she drives her way through the desert. There are some really good suspenseful moments and a great performance by Hauer that almost makes up for its many transgressions, which unfortunately become more and more numerous.

Now, I did like this movie and tried to overlook a few of the logic loopholes, but eventually they become just too overblown. The biggest one is that John somehow manages to steel Jim’s wallet while also planting a knife on him that has blood from the victims that he has killed, but the only time they are together is when they are traveling in the car and I think Jim would’ve noticed John fishing through his pockets if that were the case. There’s also a lot of timing issues. For instance passengers stop and get off a bus to go inside a roadside café presumably for lunch, but then go right back into the bus just a couple of minutes later, which isn’t enough time for them to eat, go to the bathroom, or even stretch their legs. Another scene has Jim’s girlfriend Nash (Jennifer Jason Leigh) getting kidnapped from her hotel room by John who somehow is able to enter the room without explanation and then takes her out to the parking lot and ties her up between two trucks before the police get called in and try to intervene, but this all occurs in seemingly only a couple of minutes as Jim is in the bathroom when he hears Nash being taken out and he quickly runs out into the parking lot only to see Nash already tied up and the police there.

There is also the issue of how is John able to escape out of a police van after he is caught and handcuffed, which the movie doesn’t even bother to explain or show. Another question some viewers have brought up is why is Jim driving through Texas anyways, which is where this all occurs, since it seems too far to the south from where he needs to go. Some have speculated that maybe he was going to the southern portion of California and therefore would need to pass through the Panhandle of Texas to get there, which is plausible, but the landscape is all wrong. I live in Texas and know that the panhandle region, which I’ve been to, is flat and green and has farmland while the place Jim goes through is barren, sandy and very much a desert.

The film wasn’t even shot in Texas, but instead done in the Mojave Desert in California, which made me wonder why the setting couldn’t have been there since that was supposed to be Jim’s ultimate destination anyways. Then I realized that the police are portrayed as being quite hick and redneck and since Texas unfairly still has that stereotype I’m sure that was the reason for why it was chosen.

The script could’ve certainly been better thought out, which wouldn’t have required the viewer to take such massive leaps in logic in order to enjoy it, but overall I still liked it. I think this was mainly because of Hauer who is terrifically creepy as well as for an extremely exciting car chase that features incredible stunt work and without relying on any of computerized crap either.