Bickford Wanner (Dennis Hopper) suddenly realizes that being a train robber is no longer worth the hassle, so he decides to go straight by moving into the town of Dime Box where he does a variety of menial labor jobs that he finds to be thankless. When his former girlfriend Janet (Janice Rule) shows up he gets a hankering to go back to his bandit days when he was nicknamed Kid Blue and acquired a legendary status throughout Texas.

There were a lot of revisionist westerns during the early 70’s and most of them made an impact, but this one got lost in shuffle. Personally I was impressed with the first 30 minutes where the small town residents are portrayed as being prickly, cold people whose personalities reflected the harsh, dry, desolate landscape that surrounded them. The way Bickford gets treated as an ‘outsider’ simply because he wasn’t originally born there is exactly the way anyone would’ve felt in the same situation and thus it creates an accurate and vivid setting environment.

The counter-culture movement of the late 60’s gets puts it into a western motif giving the viewer a firsthand feel how oppressive the establishment (in this case the town’s citizens) were and what a lonely, frustrating experience it is to somehow try to fit into a system that doesn’t want you to begin with. Having this theme captured outside of the modern trappings makes the message stronger and when Bickford finally does lose his cool you relate to his rage and enjoy seeing him lash out.

Unfortunately it loses focus by the second act as director James Frawley can’t seem to decide whether he wants to turn this into a comedy or gritty drama. Both Ralph Waite and Ben Johnson make for good antagonists, but there’s never a satisfying one-on-one moment where Hopper stands up to either of them in any cinematic way even though you sit through the whole thing hoping that at some point he will.

Hopper looks the part of a young man even though he was already 36 at the time, but the character’s motivations are confusing. This was a man who at one point was supposedly a successful train robber, so why does he put up with all the crap and not go back to his old ways sooner? He tolerates their abuse for far longer than any normal person would and for seemingly no reason. Having the character suffer from a physical ailment that wouldn’t allow him to return to his bandit lifestyle would’ve helped make his situation more understandable.

The ending in which Bickford robs the factory and the whole town gives him chase has strong, colorful potential, but the film doesn’t go far enough with it. It also introduces too much of a bouncy musical score that gives the action a lighthearted/slapstick quality that undermines the realism. The third act should’ve focused entirely on the chase while nixing an ill-advised story thread dealing with a love triangle that adds nothing and seemingly put in solely to pad the undernourished plot. Even though the setting is supposed to be Texas it was actually filmed in Mexico. 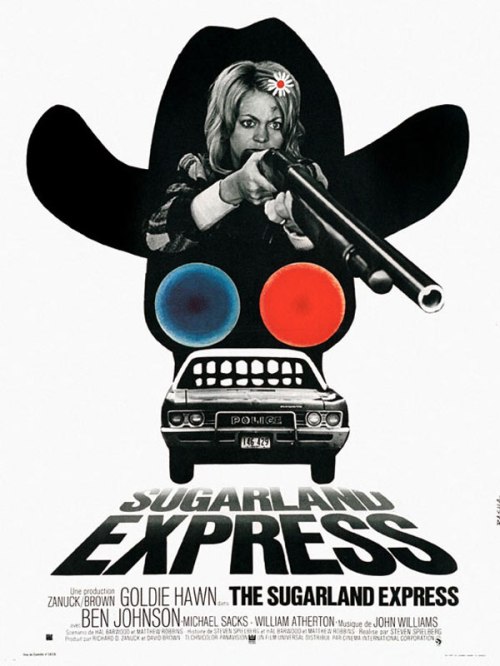 4-Word Review: She wants her baby!

When her baby is put into a home with foster parents Lou Jean (Goldie Hawn) will have nothing of it and helps her husband Clovis (William Atherton) break out of pre-release prison in an attempt to steal the child back. The two hitch a ride with an older couple (A.L. Camp, Jessie Lee Fulton), but when the car gets pulled over by Officer Maxwell Slide (Michael Sacks) they panic and drive off. The officer is able to track them down when their car crashes, but when he goes to investigate the accident Clovis pulls the officer’s own gun on him and uses it to take him hostage. They speed off in his patrol car, which soon gets the entire Texas Highway Patrol after them as well as creating a media frenzy in a slow moving car chase that spans 2-days and 300 miles.

This film marks director Steven Spielberg’s full-length theatrical feature film debut and the result is highly entertaining. He takes an odd moment in history and helps infuse a playful quirkiness to the proceedings while also gently nudging the Texas stereotype. The music by John Williams and especially the harmonica solos by Toots Theilemans help cement the mood and tone. This is also the first film to use a panaflex camera and the first ever to feature a tracking shot from inside a car.

There are enough original and humorous scenes to make this well worth catching. The scene in which the police bring in a Porto potty so Lou Jean can stop and take a pee is hilarious as is the moment where their car runs out of gas and Captain Harlan Tanner (Ben Johnson) who is technically ‘chasing’ them must push their car with his to the nearest gas station. The impromptu TV interview done during the chase is great as is the first CB conversation that Tanner has with the three inside the patrol car. The best moment though is when they go through a small town where the main street is lined with onlookers and well-wishers who hand the three all sorts of gifts and encouragement through the car windows as they slowly drive through.

Of course as with any true story the movie takes many liberties and I researched the incident by reading actual newspapers reports from that era and found this to be the jest of what actually happened. It all started in the early morning hours of May 3, 1969 when Ila Faye Dent (1947-1992) and her husband Robert where chased by the Port Arthur police for speeding. The couple managed to evade them by abandoning their vehicle and fleeing on foot into a heavily wooded area. They eventually came upon a ranch whose owner called the police to say that he had been attacked by two hitch-hikers. Patrolman Kenneth Crone, whose character is played by Michael Sacks and who also appears briefly in the film as a sheriff’s deputy, answered the call. When he arrived on the scene Robert pulled a gun on him and forced him back into his patrol car where the three then took off in the vehicle that started the massive 200 mile slow speed chase that attracted hundreds of police cars as well as onlookers and media outlets. Their destination was Wheelock, Texas where Ila Faye wanted to visit her two children from her previous marriage that where now staying with her parents. They had no intention of kidnapping them like it is portrayed in the film only to visit them for 15 minutes, which Captain Jerry Millter (portrayed by Ben Johnson) initially agreed to allow, but then later reneged.

Ila Faye Dent portrayed by Gold Hawn in the film

The changes that Spielberg and his team of two writers made to the story doesn’t help and I wish they had been more accurate with it. The biggest issue is the fact that the actual chase lasted for only about 5 hours while in the film it gets extended for 2 days, which doesn’t work because the part where they sleep overnight inside a car lot kills the momentum and makes for a draggy middle. The use of foreshadowing becomes too obvious and heavy-handed. The child-like enthusiasm by the two main characters is initially fun, but their notion that they can somehow take the police on a wild car chase and snatch back their child without having any consequences seems too unrealistically naïve even for a pair of country bumpkins as they are portrayed.

The film’s biggest downfall though and the main reason it didn’t do well in the box office is with its downbeat ending. From a directorial stand point I liked it as Spielberg infuses all sorts of interesting elements into it including making the house in which the child supposedly is staying look very foreboding and ominous as well as a brief shot of a teddy bear being thrown out a car window and laying the road while the cars speed all around it. However, seeing Clovis get shot is jarring and takes away from the film’s otherwise lighthearted tone. In the real life incident the husband did indeed get shot and killed although it happened differently than the way it gets played out here, so I don’t really have anything against showing it, but film should’ve added in a brief moment showing Lou Jean being reunited with her child after her stint in prison, which also really happened. I realize the denouncement mentions this in text over the credits, but visually showing it would’ve made more of an impact and helped the audience leave the theater with an upbeat feeling. 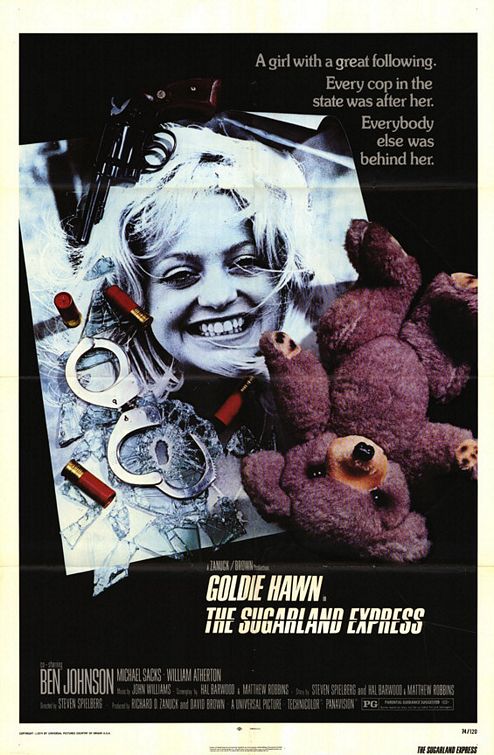 Some frat boys decide to play a nasty prank on a vulnerable student named Kenny Hampson (Derek McKinnon) which causes him to have a mental breakdown and be sent away. Now, three years later the same group of college kids gets together on a train for a raucous New Year’s Eve costume party. The problem is so does a mysterious killer who after killing each of his victims puts on the disguise that they were wearing making it impossible to track him.

Supposedly the idea for the film is the brainstorm of executive producer Daniel Grodnik who after seeing both Halloween and Silver Streak woke up one night with the inspiration of combining the two films and making a slasher movie aboard a train.  I admit when I first saw this film many years ago I thought it was pretty cool, but now upon second viewing it seems formulaic and predictable. It takes too long to get going with the first hour spent focusing on the doings of stereotypically jaded college kids who aren’t very appealing. The scares are few with the only real intense part coming at the end when the Jaimie Lee Curtis character locks herself in a cage and the killer tries desperately to get into it. The gore is also sparse and not impressive including a decapitated head that doesn’t look anything like the victim’s.

There is also a lot of glaring loopholes including having the killer murder someone inside one of the train’s cramped bathrooms and then managing to clean up all the blood, which would have taken a lot of time seeing how much there was of it, and then carting off the dead body without anyone noticing. During the climactic sequence Curtis’s character stabs the psycho in his eye, but later when the killer gets unmasked his eye and face look fine without any indication of scratches or cuts.

Curtis is a fine actress, but her presence did nothing but remind me of Halloween and they would have been better off casting someone else. Ben Johnson, who is technically listed as the star, adds some much needed stature and it is nice having a middle-aged character not portrayed as a clueless out-of-touch drip like they usually are in these types of films. Hart Bochner looks and acts like the perfect caricature of a smart-ass frat boy and its fun seeing him turn from cocky and arrogant at the beginning to desperate and frightened at the end. Magician David Copperfield is on hand essentially playing himself and some of his magic tricks are the most interesting part of the movie.