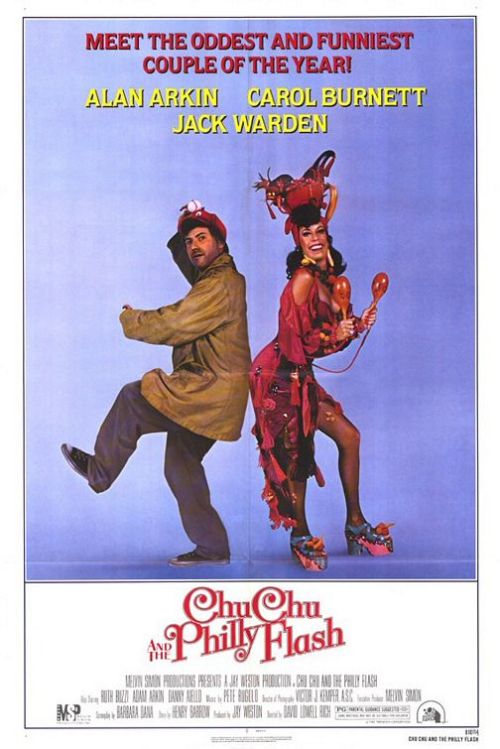 Flash (Alan Arkin) is a former big league pitcher who is washed up while living on the city streets selling stolen watches that don’t work. Emily (Carol Burnett) is a former dance instructor who is equally down-and-out and now makes a meager living doing dance routines on the streets while wearing a Carmen Miranda outfit. The two inadvertently meet one day while coming into contact with a briefcase that has stolen government documents. They agree to give it back to the men who are demanding it, but only for a price, which only helps to get them into more and more trouble.

This offbeat comedy, which was written by Barbara Dana who at the time was married to Arkin, has a few funny, dry humored moments at the beginning that makes it somewhat passable, but it’s unable to sustain any type of momentum and does not have enough action or comedy to keep it engaging. The middle half is slow and boring and the ending, which takes place at an amusement park, is too full of forced humor and sloppy slapstick to be considered either funny or entertaining. The film also never explains what specifically these secret plans are, or who these men are that are chasing after it, which only proves how poorly thought out and threadbare the plot really is.

The relationship between the two main characters doesn’t work either. They seem to let their guards down too easily for people that have been living alone and on the skids for so long and having them share more of a bickering and distrustful chemistry would’ve made it more realistic and edgy. The whole middle half is spent hearing them telling each other about their woeful pasts, which is neither compelling nor insightful and only bogs the film’s already slow pace down even further. These are the type of wacky character who can only be effective if put into comically frantic scenarios of which there needed to be much more of.

Arkin manages to give a pretty good performance playing a surprisingly subdued character that does not go off on hyper rants like the characters in some of his other film roles do, which is a good thing. However, Burnett is completely wasted despite seeing her in a Carmen Miranda outfit, which is a definite hoot. The only one who is genuinely funny is Danny Aiello as the exasperated bad guy.

Danny Glover can also be spotted in an early role as a homeless person trying to spy on Burnet and Arkin to see what they’re up to, but his part is one of the corniest ones in the movie and should’ve been dropped completely. The San Francisco setting may remind one of the classic comedy What’s Up Doc?, which also took place in that city and had a similar storyline dealing with a misplaced briefcase, but that film was far more consistently funny and took more advantage of the bay area locales while this one only focuses on the rundown areas of the city.