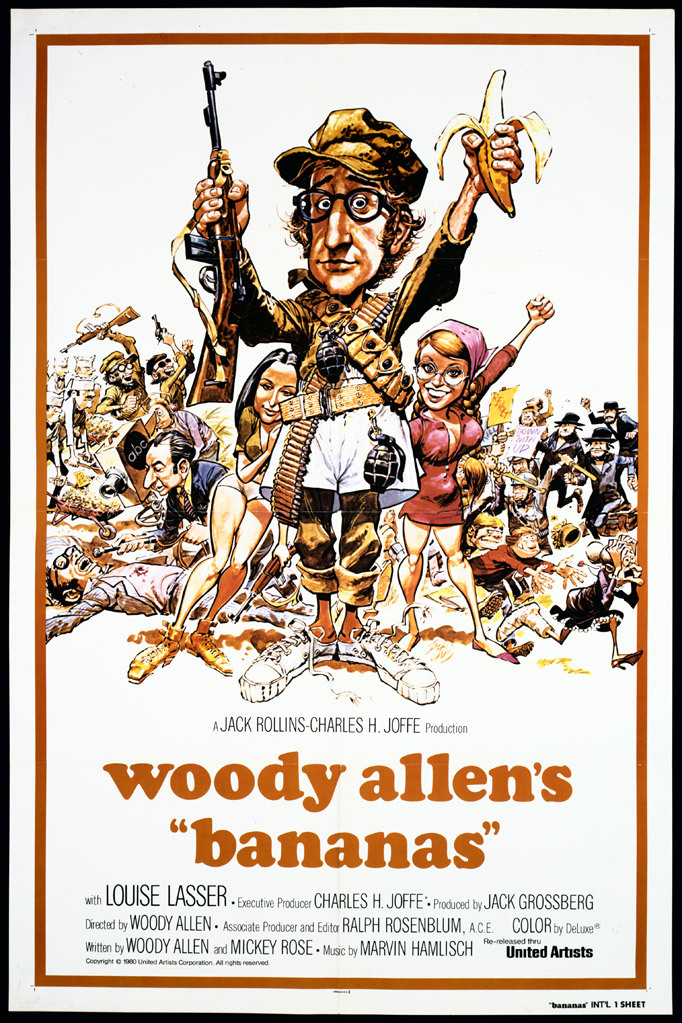 4-Word Review: From nebbish to dictator

Fielding Mellish (Woody Allen) is a shy, meek individual who works as a product tester, but comes to realize that his job has too many pitfalls and wants to pursue another line of work. One night while in his apartment he receives a knock at his door and meets Nancy (Louise Lasser) who is a social activist. Fielding doesn’t have much interest in politics, but finds Nancy attractive, so he pretends to be into her social causes. Their relationship though does not survive, but Fielding decides to travel to the Latin country of San Marcos anyways, which is where the couple was planning to go to before the breakup. The country is suffering through a revolution and Fielding inadvertently gets caught up in it to the extent that he becomes their acting leader and travels back to the US to ask for foreign aid, but once home Nancy recognizes Fielding for who he really is and this soon has him put on trial.

This was done during the period when Woody was just trying to be funny and without all the pretension and nostalgia that make up so much of his later work, which I don’t care for as much. While there are draggy spots, particularly during the second act, the beginning and end are so strong that it more than makes up for it especially the climactic court sequence, which is laden with a lot of non-sequitur sight gags that didn’t come into vogue in movies until 10 years later when it was introduced to mainstream audiences with great success in the movie Airplane.

What I really liked though is that Woody actually seems to playing a character here and not just himself. No endless whining about his hypochondriac conditions, or New York being vastly superior to L.A., or how Ingmar Bergman is the greatest film director. This stuff seems to work into many of his later scripts and characters, but here he just plays an average blue collar guy whose only ambition is to get laid, which is wonderful and I really enjoyed pairing him with Lasser. The two had already divorced  by the time this was filmed, but she agreed to remain on as his co-star, which is great as I’ve always said she’s the female version of Woody and in many ways can easily upstage him in just about every scene they share. People like Diane Keaton and Mia Farrow, who became his co-stars in his later movies, were too normal and didn’t compliment Allen’s quirky style like Lasser does and it’s just a shame she disappears during the second act as her presence would’ve prevented it from getting as draggy as it does.

While most of the gags are quite funny and even inventive I did have a problem with a few of them. The opening bit, which features a televised assassination of the country’s leader, manages to make even Howard Cosell, an obnoxious, egotistical sportscaster that I never cared for, enjoyable especially as he fights his way through the crowd to get an interview with the dying dictator. However, if you’re going to show a guy getting shot then some blood is needed. Allen said he wanted to avoid this because he feared it would hurt the film’s ‘light comic tone’, but its been proven in movies like Shaun of the Dead that gore and comedy can still work together and having Cosell ask the leader ‘how does it feel’ as he lies there bloodied would’ve been dark comedy gold.

The segment where Woody walks into an operating room to tell his parents (Stanley Ackerman, Charlotte Rae), who are both surgeons performing an operation, that he’s traveling to another country, is for the most part an aspiring bit except that in the scene the patient (Hy Anzell) is awake and talking. There is simply no way that anyone being cut open wouldn’t be put under anesthesia, so having him speak is not only unrealistic, but not necessary as the humor from the segment comes from Woody’s interactions with his folks and not from anything that the patient says.

Overall though this still comes as highly recommended especially for Woody cinephiles looking to take in his wide body of work. His more serious directorial efforts are good too, but in a different way. Yet its his irreverent style that tests the movie making formula, which he does here, that I enjoy the most and while he has done many comedies after this they cease to have the same rapid-fire zaniness as this one. I also have to mention the cigarette commercial that takes place during a Catholic mass, which is the best ad-spoof I’ve ever seen. It did end up being condemned by the National Catholic Office of Motion Pictures, but it was worth it.