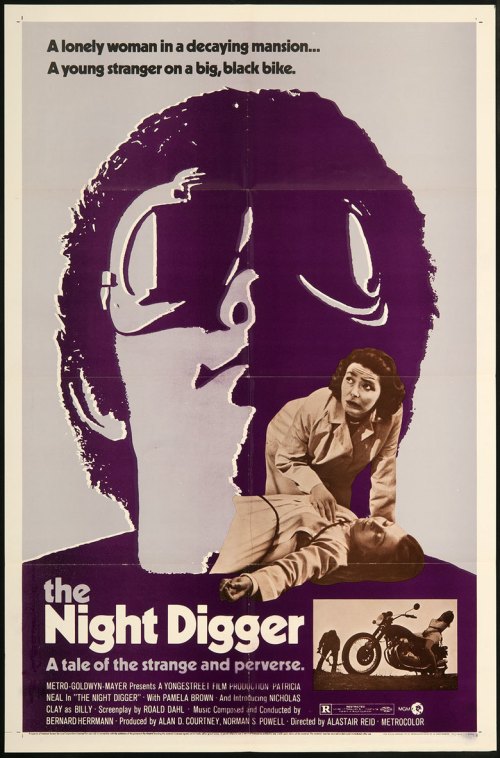 Maura (Patricia Neal) is the repressed daughter of Edith (Pamela Brown) who both reside in a large gothic mansion. Maura has never married and completely controlled by her overbearing mother, but feels she has no way of getting out of it. One day Billy (Nicholas Clay) rides in on his motorcycle looking for work. He wants to be the resident handyman. Maura declines to hire him, but is overridden by her mother. Soon Billy is living at the mansion with the other two and helping out by fixing things when he can, but Billy is tormented by his tortuous past, which leads to a twisted conclusion.

The film is based on the novel ‘Nest in a Fallen Tree’ by Joy Crowley that was adapted into a screenplay by Roald Dahl who at the time was married to Neal. I’ve never read the novel, but feel it must assuredly have more context particularly with Billy, than what you get here. The plot certainly has some intriguing elements, but it all gets lost with the poorly defined characters. For instance there’s several flashbacks shot in black-and-white showing Billy being tormented by a group of women, but no explanation for who these women were or why they were doing it, or why Billy was got caught up in that situation to begin with. Without more of a backstory the plot and people in it don’t mean as much and the film becomes transparent.

I did though like the directing by Alastair Reid, which is the one thing that holds it together. He makes great use of shadows and darkness and the brief scenes of Billy’s attack on women have a chilly visual effect. I also loved the setting shot at Oakley Court, which is a large stately mansion built in 1859 and now used as a hotel. The scene where Maura goes searching for Billy in his room and opens up what you think is a closet door, but instead is just a gateway that leads to three other rooms shows just how immense the place was, which though does prove to be a bit problematic if you think about it. Why would these two lonely women live in such a large place and if they aren’t rich, which Edith states in the scene where Maura serves them steak dinner, which  she states they ‘can’t afford’ then where did they find the money to own such a large place and maintain it?

The acting by Brown and Clay is good and some interesting bits by Graham Crowden in a supporting role, but Neal seems miscast. I realize she got the part because she was married to the screenwriter, but she looks almost as old as Brown, who plays her adoptive mother, but in reality there was only a 9 year age difference. Her character, like with Billy’s, is not fleshed-out enough making her actions more confusing than revealing like when she despises Billy’s presence at one point only to suddenly throw herself at him the next.

The ending is disappointing. I sat through this wondering what the twist was going to be, but there really isn’t any and it just leaves more questions than answers. Apparently Bernard Herrmann, who was hired to do the music, disliked the ending immensely and this was the first thing out of his mouth when he sat in to screen the film. He even threatened not do the soundtrack unless it was changed, but after arguing with Dahl he eventually caved, but personally I wished he had gotten his way.