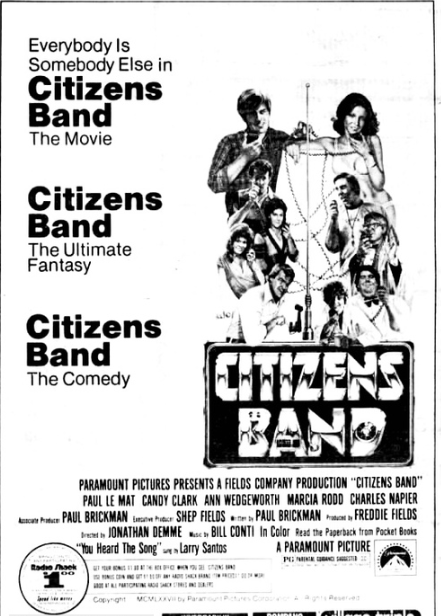 Spider (Paul LeMat) makes a living repairing CB radios in the home he shares with his crochety father (Roberts Blossom). In his spare time he monitors channel 9 on his own CB, which is used as an emergency channel to report motorists who are in distress. When he comes into contact with a disabled plane that crashes right onto the highway and he’s not able to use his CB to call for help due to some kids clogging up the channel with idle chit-chat he goes on a crusade to destroy the radios of everyone in town who are misusing the frequency. While doing this he also dates a cheerleading coach Pam (Candy Clark) who he’s engaged to marry unaware that she has a thing for his brother Dean (Bruce McGill) the local high school gym teacher.

The film, which was written by Paul Brickman, who went onto greater success writing/directing Risky Business, has its share of quirky characters/moments that paints small town life in a romanticized but humorous way. To a degree it succeeds, but the people are a bit too nice for their own good. There are many scenarios where just about anyone else put into the same situation would respond in an angry way and yet here everyone remains mild mannered no matter what hits them, which may be dryly funny at first, but after awhile gets one-dimensional.

Small town people are no different than anyone else and if one finds out that your fiancée is suddenly seeing some other guy, especially after you’ve given her a ring, most would become upset and the way Spider takes it in such a ho-hum way doesn’t seem natural. Later when the two brothers finally confront each other there’s no fight, or even shouting, they just end up hugging each other, which I guess is nice, but it would’ve been better had there been some action or confrontation, which this film sorely lacks. Maybe having them breakout into a fist fight that destroys the apartment in the process, but done in a slapstick way only to eventually, once they’ve exhausted themselves, forgive and forget.

The two women (Marcia Rodd, Ann Wedgeworth), who meet at random during a bus ride only to find that they’re married to the same man (Charles Napier), has the same issue. Once they confront the two-timer there’s no fireworks at all. They pretty much instantaneously forgive him and then proceed to have a genteel conversation about where everybody is going to live instead of watching the two give the guy the business, which would’ve been more entertaining. There is a scene where the two women let the cows escape from the guy’s truck, but even this gets botched because we never see the cows run through the town and all the destruction they would most likely create.

The rest of the film works on the same level. Too much emphasis on the subtle with nothing really standing-out. The characters respond to everything with the same laid-back manner until there’s no distinction between them. Eventually it just flatlines. Instead of being this offbeat look at small town life it becomes more a whimsical fairy tale where the people don’t resemble actual folks.

I believe this is the main reason why this film did so poorly at the box office where it recouped a paltry $850,000 back from its initial $5 million budget. The studio thought it was due to the title because of the word ‘band’ being in it and people mistakenly thinking it was a musical, so they reissued it as Handle With Care, but it did no better. This also became yet another film directed by Jonathan Demme that fared well with the critics, but not the public and this trend continued with his films all the way through the 80’s before he was finally able to hit-pay-dirt with Silence of the Lambs.