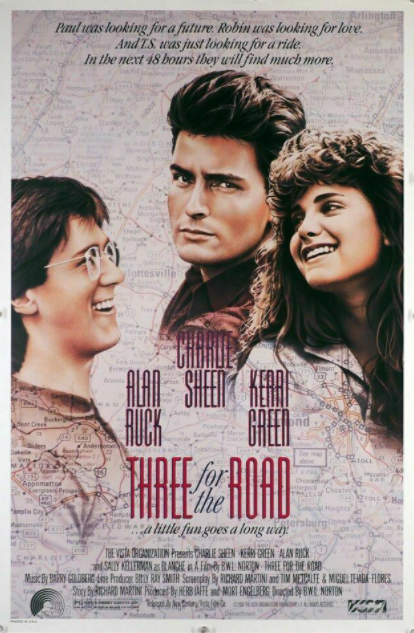 Paul (Charlie Sheen) aspires to have a career in politics and is an ardent believer in the political system and the politicians who work in it. He becomes an aide to Senator Kitteridge (Raymond J. Berry) where he gets assigned to transport the senator’s rebellious daughter Robin (Kerri Green) to an institution for troubled girls. Paul’s writer roommate T.S. (Alan Ruck) comes along with him, but they face many hurdles keeping Robin under control. Eventually Paul bonds with her when he realizes her father isn’t really the great guy he pretends to be, but instead an abuser.

This film is yet another victim of a script, which was written by Richard Martini, that was intended to be far different than what it turned out to be. Originally the idea was to center it on the political angle where the father was a conservative who wanted to put Robin into hiding simply because she was a liberal activist stirring up trouble. Yet after extensive rewrites by three other writers the story becomes just another shallow romance-on-the-road flick that shifts to extremes from slapstick comedy to hackney drama.

One of the things that’s most problematic is the father asking a young man who he really doesn’t know to transport his daughter to some far off location and even gives him handcuffs to use on her just in case she gets ‘out-of-line’, but what sort of parent would hand his teen daughter over to a virtual stranger and trust he won’t rape her? A far more plausible premise would’ve had him entrusting his daughter to a longtime friend, who he at least had better reason to trust. Instead of having her go with guys around her same age, where sexual urges are high, the escort could’ve been middle-aged. Yes, this would take away the teen romance element, which quite frankly comes-off as formuliac and forced anyways, but it could also have brought up generational issues, which would’ve been more interesting.

Sheen, who has described this film as being “a piece of shit that I wished didn’t exist and that I was terrible in”, is actually the best thing in it. I enjoyed seeing him play this straight-lace guy, which he is good at doing, that completely works against his real-life party-boy image. The only issue with him is that his character arc, where he starts out believing in the integrity of the senator father only to eventual grow disillusioned with him, is too predictable and obvious. Most people, even back in the 80’s, had a cynical take on politicians just like they do now. A far better arc would’ve had him cynical about politics, getting into it as an aide simply to boost his career, but not actually believing in the system, only to find much to his surprise that there actually was at least one politician that was honorable.

Green’s character plays too much into the ‘wild teen’ stereotype and her outrageous antics are more obnoxious than funny. She’s also too short and seemingly too young for Sheen, making the romance seem off-kilter. I also didn’t like that during the trip the main characters come into contact with the same people they’ve bumped into before. I’ve taken many long road trips and have never encountered this phenomenon and it really doesn’t add anything to the script especially since the person they keep crossing paths with is a brainless jock (Eric Bruskotter) that culminates into a silly car chase that just succeeds at making the whole thing even more inane than it already is.

There’s enough action and twists to keep it going, but it also becomes increasingly more strained as it goes along. The tacked-on drama along with the over-the-top prison break, which gets pulled-off in too easily a fashion, is particularly torturous and makes this one road trip you won’t mind missing.