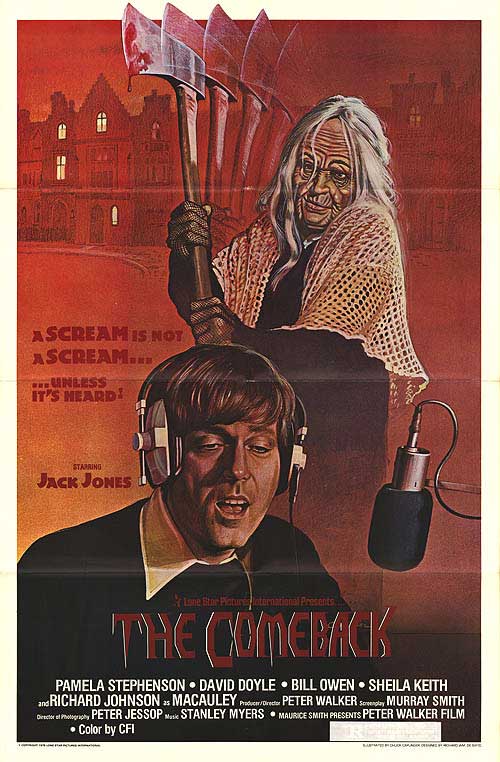 Nick Cooper (Jack Jones) is a successful singer trying to revive his career after a 6-year hiatus. He travels to London to work on a new album under the guidance of his manager Webster (David Doyle), where the two share a hot-and-cold business relationship. Meanwhile his ex-wife Gail (Holly Palance) goes to their former apartment to collect her things, but is attacked by someone dressed as an old lady and brutally killed. After the murder Nick begins to hear noises at the mansion he is staying in that is owned by an older couple (Bill Owen, Sheila Keith) in which he hears the sound of a woman crying, but can’t detect where it is coming from.

This is another Pete Walker production who has in recent years received a strong cult following for the long line of British horror films that he directed during the 70’s and early 80’s before leaving the profession in order to start up a business where he bought and refurbished old movie theaters. While I’m not a big fan of some of his early work, which seemed kind of hooky, I felt this horror outing managed to deliver for the most part.

What impressed me most was the brutality of the murder where Gail not only gets stabbed many times, but has her hand cut off, which goes flying down the stairs. This was in the era of the Video Nasties, where the British government was banning all sorts of horror films brought in from other countries, so I was surprised why this one got a pass. What made it even more gruesome is that the camera keeps cutting back to the dead body at different intervals where the viewer vividly sees the decaying process. It starts by showing a close-up of the dried blood that covers the victim’s face, real blood was used that had been donated from a local hospital, then later on it cuts back to show maggots’ inside her eye sockets and mouth  and eventually even rats eating away at her face.

Having singer Jack Jones, who’s best known for crooning the theme song from the TV-show ‘The Love Boat’, cast in the lead seemed an odd choice. Apparently Walker was determined to get a singer for the part and first approached Cat Stevens and then Ringo Starr who both declined, so he had to settle for Jones, who isn’t bad. It’s refreshing to see a protagonist in a horror flick that isn’t a teen or college aged and instead in his 40’s, but since there is an element of teen idol worship in the story it would’ve made more sense having a younger singer cast that would’ve appealed more to the youth of the day.

David Doyle, best known for playing Bosley in the TV-show ‘Charlie’s Angels’, is surprisingly effective too and given a big role. Usually he would be relegated to small supporting parts in comical films, but here does well in a dramatic one and even seen at point putting on women’s make-up and wearing a dress, but the film never follows-up with this potential story thread, but should’ve.

The murders aren’t too prevalent, there’s only two and spread far apart, but they’re gory enough to leave a strong impression. The story moves a bit too slowly and while there is tension at times it’s not consistent. The wrap-up though is a complete surprise and pretty much comes out of nowhere, but I didn’t mind.

While the script is satisfactory there were a couple of moments that didn’t make much sense. One has Nick returning to the mansion after he’s seen the decapitated head of his ex-wife in a box there and tormented each night by her cries and screams, which is enough to send him to the mental hospital for awhile. If it were me I’d never go back to that place again and yet Nick does and just casually turns up the music on his radio when he again starts hearing the ghostly cries instead freaking out like anyone else would’ve. The scene where he takes an ax out of a victim’s body, who had been killed by someone else, and then is seen holding it over the dead body as someone else enters the room, made me believe he was going to be accused of committing the murder, but it doesn’t work that way, but probably should’ve. 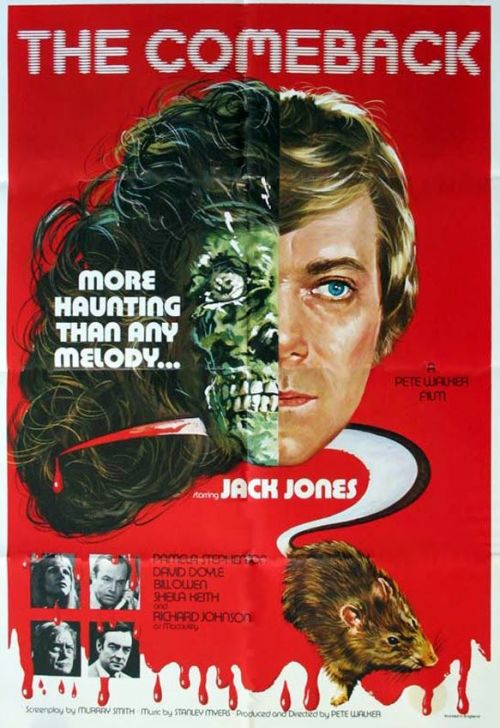