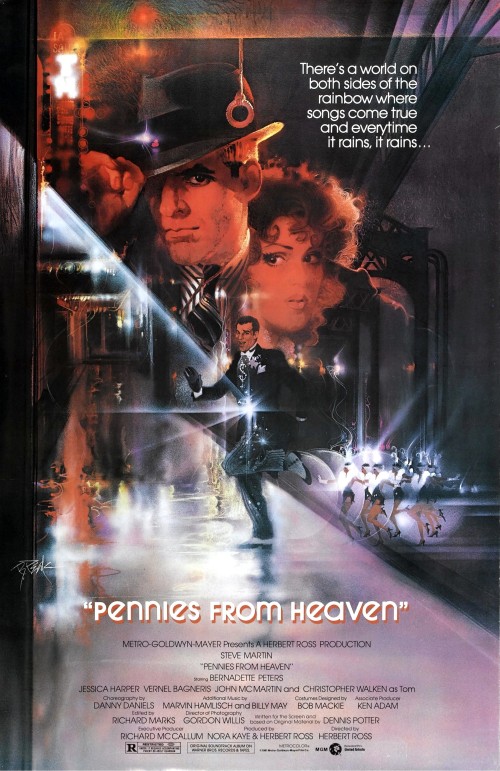 4-Word Review: Escaping from the depression.

Arthur (Steve Martin) is a struggling sheet music salesmen during the depression, who’s looking to escape his dreary existence by becoming a songwriter, but finds that no one including his wife (Jessica Harper) cares about what his dreams, which leaves him feeling lost and alone. He then meets perky schoolteacher Eileen (Bernadette Peters) and the two begin an affair despite her not knowing that he is already married. When she gets pregnant and loses her job because of it Arthur is nowhere to be found and instead he gets unjustly tabbed for committing rape on a blind woman (Eliska Krupka) that he did not do.

The film is based on a 6-part miniseries that aired on the BBC in 1978 and starred Bob Hoskins. Martin saw it and was so enamored with the story that he became compelled to have it remade here and the studio even hired the same writer, Dennis Potter, to pen the script although the studio forced him to do 13 rewrites before they finally accepted it. Despite the extravagant musical numbers, which are pretty good, and positive critical reception, the filmed failed to achieve any success at the box office where it took in a paltry 2 million that barely made a dent in its 22 million budget.

A lot of the blame can be placed on the casting of Martin. While I admire him for not allowing himself to be typecast, and for dying his hair brown here, he still comes off as misplaced. You keep waiting for him to say something goofy and absurd like his character in The Jerk would and when he doesn’t you start feeling bored and frustrated. For his part he lashed out at those that didn’t like it calling them ‘ignorant scum’ while anyone who did enjoy the film he labeled ‘wise and intelligent’.

Yet his character is also a problem as he comes off as arrogant and selfish the whole way through. He constantly antagonizes his shy wife pressuring her to submit to his kinky sexual fantasies and when she doesn’t he threatens to walk out. He then lies about his marital status to Peters and is cold and ambivalent when she gets pregnant making him seem like a true jerk and not the funny kind in his earlier film.

Jessica Harper I enjoyed much more. I think she gives her finest performance here and I was genuinely surprised she wasn’t nominated for an Academy Award. Her interpretation of a shy, sheltered Midwestern wife from a more innocent era is completely on-target and I came to sympathize far more with her than Martin. The line that she utters when the police investigators come to her house, after Martin gets accused of rape, is the best moment in the movie. Peters is good too, but I felt her character got in the way and the film would’ve gelled better had it focused solely on the dysfunctional marriage.

The dance numbers are well choreographed with the best one being with Christopher Walken who does a bona fide striptease that took him over 2 months to rehearse. The bit in which Martin and Peters find themselves transported inside a film starring Fred Astaire and Ginger Rogers is quite cool too although Astaire himself tried blocking the footage from being used. He later commented that as a viewer ” I have never spent two more miserable hours in my life” and describing every scene in the film as being “cheap and vulgar.”

The story though starts out too slowly and for the first hour seems like there really isn’t any plot at all. It improves by the second half, but there needed to be more urgency at the beginning and many viewers may not be willing to stick with it.  Having the actors lip-sync the songs was a bad idea too. It gives the whole thing an amatuerish vibe making it seem like it was intended to be a campy comedy when it really wasn’t.