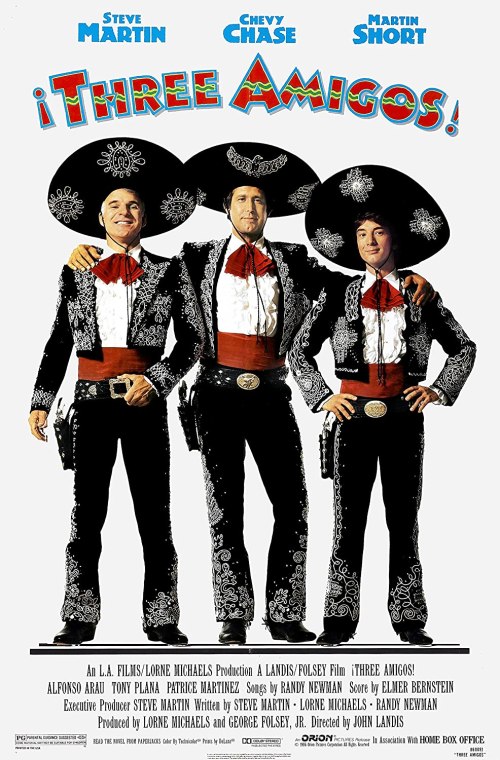 El Guapo (Alfonso Arau) and his gang terrorize a small village in 1916 Mexico by demanding that its residents pay him ‘protection money’ or risk getting pillaged. Carmen (Patrice Martinez), who is the daughter of one of the village elders, tries to come up with a plan to stop them and finds her solution after watching a silent film featuring The Three Amigos (Steve Martin, Chevy Chase, Martin Short) who  fight evil doers and injustice. Thinking they are real heroes she sends them a telegram inviting them to her town to fight El Guapo. The Amigos, who have just gotten fired, think it’s an invitation to do a show and in desperate need of money travel across the border unaware of the dangers that await.

While the concept is ripe for great comic potential the script almost immediately starts showing its cracks. Now, I was not around in 1916, but it seems to me that people would’ve still been sophisticated enough to know the difference between movie acting and the real thing and the fact that Carmen, who is well over 18, doesn’t makes her seem a bit too naive. The three amigos aren’t much better as they fail to know the meaning of such words as infamous, tequila, or even veranda. Comedies based on misunderstandings can be highly enjoyable, but it still depends on the characters being reasonably intelligent to make it work and the group here are just too dumb to be believed making the whole scenario weak and watered down from the get-go.

What’s even more aggravating is that the film cheats on its own rules. Steve Martin scolds the bandits for using real bullets, as at that point he was still under the impression that they were fellow actors, but then the amigos’ guns end up having real bullets too even though if they were really just actors they should’ve been stage props with blanks. They turn out to be great shots too, able to shoot the bad guys even from long distance making them seem like actual gunfighters and not actors at all. There’s also a scene where Martin gets shot in the arm and while this might not be fatal it could still cause severe pain and infection, but there’s no scene showing it getting removed and bandaged up and  he continues to move it like it wasn’t even injured.

While it was interesting seeing Chase getting laughs for being a doofus as opposed to his snarky quips I still felt the three characters were too transparent. Not only is there very little contrast between their personalities, but there personal lives are never shown. These were supposedly big stars who should’ve had a big fan base, agents, friends, or wives/girlfriends, so the idea that they had ‘nothing to go back to’ and thus decided to remain in Mexico didn’t really make sense. Even with the argument that they had recently gotten fired from their jobs they should’ve had enough fame and connections in L.A. to find other gigs without immediately being so hard-up.

There’s a scene too where the three are shown sleeping together in a small bed, which seemed to intimate that they were gay. This never gets confirmed, but the film might’ve been more interesting had they been.

The moment where the three sing ‘My Little Buttercup’ inside a rough Mexican bar filled with bandits is the high point, but everything else is downhill. Instead for forcing these dimwitted actors to face the harsh realities of true western life outside of their Hollywood safe place it deviates into ill-advised surreal fantasy that contradicts the whole premise. The worst moment is when they sing a song in front of an incredibly fake looking sunset backdrop that features talking animals, which is so stupid that it destroys everything else that comes either before or after it.