In 1953 during the height of the Red Scare where many working in Hollywood were blacklisted if they had any connections with communist sympathizers writer Alfred Miller (Michael Murphy) suddenly finds himself out of work and unable sell any of his scripts. He asks his friend Howard (Woody Allen) who works as a cashier at a cafe to act as a ‘front’ for him by selling his scripts to producers and acting as if he wrote them instead of Alfred. In exchange Howard would be able to collect 10 % of the profit, which he readily accepts. Soon Alfred’s other writer friends hire Howard to sell their scripts, which quickly makes him financially comfortable, but he soon sees the dark side of the business especially when he gets investigated for being communist sympathizer himself.

The film was written and directed by those who personally went through the blacklisting when it happened, which is great, but the film cannot seem to decide whether it wants to be a drama or comedy and takes too much of a timid, middle-of-the-road approach that is neither impactful nor memorable.  Lots of prime comedic potential gets completely glossed over like when Howard is forced to do a rewrite on a script in a hurry despite having no background, or knowledge on how to do it. This occurs twice and both times the film fails to show what he does to get out of the jam, he is shown for a couple of seconds on the phone presumably with Alfred getting advice, but it would’ve been funny hearing their conversation and seeing him quite literally sweat his way through the process.

The drama gets handled in too much of a genteel way too making the intended message mild and not something that completely connects emotionally with the viewer. The scene where Zero Mostel jumps out of a hotel window when he realizes his career is over happens much too fast. One second we hear the window being opened and the next second the camera quickly pans over to see that Mostel is no longer standing in the room making it seem more like he just disappeared into thin air. The ending where Howard finds himself forced to testify in front of the House of UnAmerican Activities panel is weak as well. The final 20 minutes is spent with this big build-up of what Howard will do when he is put in front of them, but the payoff is slight and hinges on him telling them to go ‘fuck themselves’, which is such an overused expression in this modern age that it hardly resonates as it once might’ve been.

Allen is an obnoxious protagonist that I did not find funny or sympathetic. He became so unlikable that I started wanting to see him get caught and even humiliated, which I don’t think was what the filmmakers intended the viewer to feel. I also thought it was ridiculous that this scrawny, dorky looking guy would be so brazen to come-on to hot looking women like he does. I know in the movies that he directs this always occurs and I looked past it as Woody simply revealing his diluted, narcisstic ego, but this film was done by a different director, so things should’ve been presented in a more realistic way by having the beautiful women laugh at Woody when he attempted to ask them out and forcing him to settle for someone his physical equal. I realize that Andrea Marcovicci’s character falls for Woody because she thinks he’s the writer of the scripts, but I would think after she went out with him for awhile she’d start to realize he wasn’t the same person she thought he was and not have to have it explicitly spelled out  for like it ultimately is.

It would’ve worked much better had Michael Murphy been cast as Howard as he was more able to convey likable qualities. Zero Mostel is also quite strong as the desperate comedian and had his character been cast in the lead it would’ve given the viewer a stronger feeling of what it was like to be blacklisted during that era as the story would’ve been told from the victim’s point-of-view instead of having those directly affected by the McCarthyism relegated to only supporting parts. 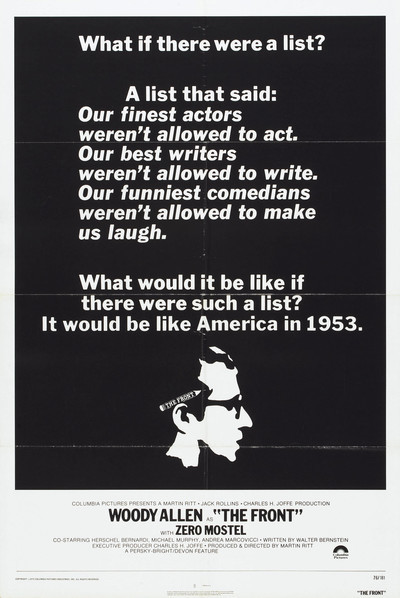 Posted in 70's Movies, Comedy/Drama, Movies Based on Actual Events, Movies that take place in the Big Apple