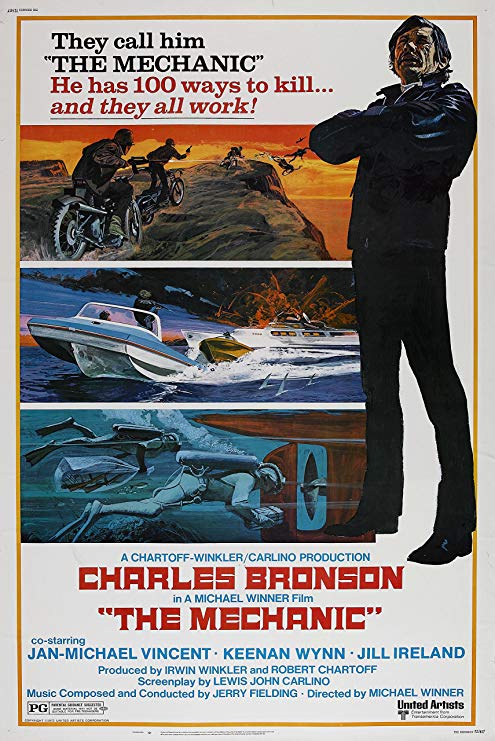 Arthur Bishop (Charles Bronson) is a top assassin who is able to make his hits look like accidents. He works for a secret organization that assigns him people to kill and one day they tell him to kill Harry (Keenan Wynn) a man who at one time headed the organization. Arthur kills Harry by making it appear as if it were a heart attack and then becomes friends with Harry’s young but brazen son Steven (Jan-Michael Vincent). Steven harbors all the qualities that Arthur likes in an assassin so he decides to train him into the business, but this doesn’t go over well with the organization who assign both men to kill each other.

While I had a hard time believing that an old man who was Arthur’s first hit in the movie and who was so paranoid that he would look around before entering his apartment building, but then still recklessly keep the blinds on his windows wide open, which would allow somebody like Arthur to look straight into the apartment without any problem didn’t make much sense. The camera also has a point-of-view shot where we can see things from the victim’s perspective inside the apartment and you could clearly see Arthur looking at him through his binoculars from across the street making me think the man would’ve eventually notice him as well. However, I enjoyed how the film focuses more on the preparation for the hit and the meticulous attention to detail that it requires than the actual killings, which helps give the film and added dimension that other movies about hit men don’t since they dwell almost exclusively on the violence.

The action sequences aren’t bad and include a very exciting motorcycle chase that has a few lighthearted moments as they crash through a dinner party on the property of a rich man’s home. Even watching a yacht explode in the middle of a sea is cool because a real explosive on a real yacht are used versus computer effects like in today’s movies, which no matter how improved they become still look fake when compared to the real thing.

Bronson’s acting is good here mainly because the dialogue is limited and in fact the first 16 minutes feature no speaking at all, which for Bronson is a blessing. Even his wife Jill Ireland is enjoyable playing a prostitute in a scene that is brief but still quite fun. Vincent  is okay, but the part could’ve been stronger had it been played by a more versatile actor like Richard Dreyfus, who was the original choice, but director Michael Winner disliked him for personal reasons, so he was never hired.

The one area where the film fails is that it doesn’t stay true to Lewis John Carlino’s script, which had the two main characters originally being closet homosexuals, which would’ve given the film a fascinating and at the time ground breaking subtext while also helping to better explain why Arthur would take the risk of bringing Steve in on his secret profession. Unfortunately the studio couldn’t get the necessary funding it needed with the gay storyline and many actors who were offered the part originally like Cliff Robertson and George C. Scott refused to do it unless the gay angle was taken out, which is a shame as the two main characters come off as too one-dimensional otherwise.

This same story was remade in 2011 and while that version had better twists it still left out the gay angle and it would be nice if some studio at some point would take on the Carlino’s original script and film the story as it was intended.