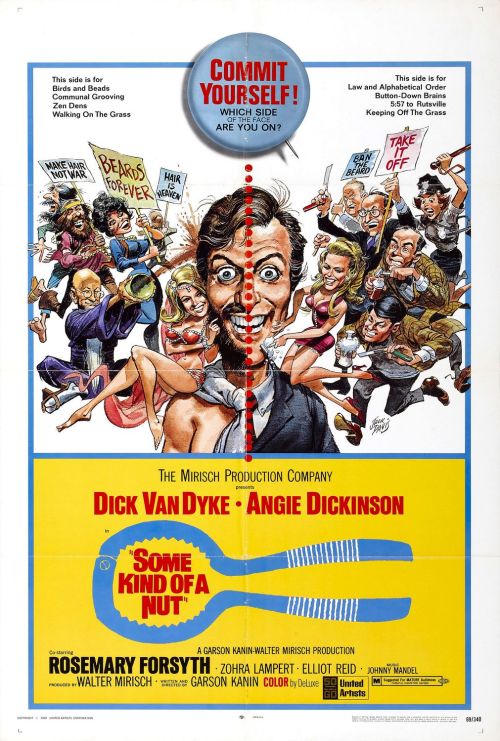 One day while out on a picnic in Central Park with his fiance Pamela (Rosemary Forsyth) Fred (Dick Van Dyke) gets stung on his chin by a bee. The sting takes too long to heal, so in order to avoid having to shave over it he grows a beard, which doesn’t go over well at his job. When his boss (Peter Turgeon) tells him to get rid of it and he refuses it leads to his firing, which mobilizes his co-workers to walk off of their jobs in protest.

Writer/director Garson Kanin has written many funny and award-winning screenplays with Adam’s Rib and Born Yesterday being two of his most famous ones, but this script seems like it was written by a completely different person altogether. The idea of Van Dyke bucking-the-system and discarding conventional mores has definite potential especially since it was filmed in the late 60’s when a lot of that was going on, but the movie goes nowhere with it. Instead of dealing with the ramifications of his rebellion the plot pivots to his ex-wife’s (Angie Dickinson) attempts at reconciliation, which is too contrived and has nothing to do with the main theme.

Van Dyke has one brief moment of non-conformity and then immediately snaps back into being his staid self without showing any real growth or change. Instead of him directly organizing the effort to have his co-workers walk off their jobs on his behalf it’s actually another associate (played by David Doyle) who inspires it while Van Dyke stands back in awe like a main character who has become a passive bystander in his own movie.

There was no need for three female love interests either. Forsyth was the youngest so in some ways it made more sense for her to connect to his rebellious side, but instead it’s Dickinson his ex-wife. However, it’s never made clear what lead to their divorce in the first place, so unless they tackle that direct issue then whatever reconciliation they have will only lead to another break-up down-the-road. Zohra Lampert, who plays this beatnik type lady that Van Dyke befriends and goes out drinking with, is far more lively here than the other two actresses and showed just enough bohemianism traits to fit with the film’s attempted non conformist theme.

There are some interesting camera shots like a close-up of the actual bee sting and a segment, which I thought was real cool when I was in the third grade and first saw this film, showing a map of the nation and then a red miniature car similar to the one Van Dyke and Forsythe are riding in driving around on it to  each city on their trip. However this amounts to just being a shallow way to cover-up how boring and empty the script really is, which meanders too much on scenes that don’t propel the story along. A good example of this is when Forsyth and her two brothers (Elliot Reid, Steve Roland) chase Van Dyke around his apartment complex in an attempt to shave off his beard, which seemed like a futile waste of energy because he could just regrow it in a matter of a few days, so why even bother?