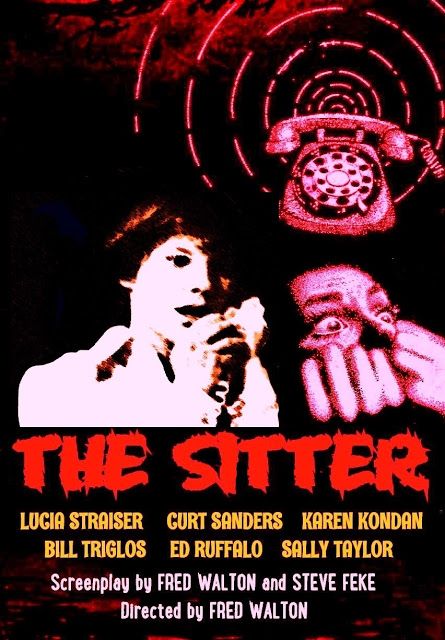 This small budget, short film, which was made for $12,000 much of it coming  from the donations of director Fred Walton’s and producer Steve Feke’s friends deals with the urban legend of a babysitter (Lucia Stralser) coming to the home of the Mandrakis (Bill Striglos, Karen Kondazian) to watch over their two children who are asleep upstairs while they go out. Soon after the couple leaves the sitter starts to receive harassing phone calls from a mysterious man asking if she’s ‘checked the children’. At first she dismisses them, but eventually when they continue she notifies the police who decide to trace where the calls are coming from.

The urban legend known as ‘The Babysitter and the Man Upstairs’ has been around since the early 60’s and the story was first filmed in 1971 in the 14-minute short entitled Foster’s Release, but this film was the one that caught the attention of mainstream audiences when it got screened at the Mann’s Theater in Westwood, California before a showing of Looking for Mr. Goodbar and the positive response it got convinced Walton that he should expand it into a feature length film, which he did two years later.

This film is alright, but gets hampered by having a weak actress in the role of the babysitter, who has an androgynous look about her and unable to convey emotions effectively.  Not only does she not check on the children, even though you’d think after repeated calls she would get the inkling to do so, but she then states to the police on the phone that she’s ‘all alone’, which isn’t true and makes you wonder if she completely forgot why she was at that home to begin with.

I did like the part where she raids the refrigerator and starts eating a piece of cake from it as I think a lot of babysitters do this. I also found the catty conversation that she has with one of her friends on the phone, before the harassing calls start, to be rather amusing and very teenage girl-like. I even liked the fact that she pours herself a glass of hard liquor and starts to drink it, but this also made me think that the alcohol should’ve had some effect on her, especially with such a thin body, causing her to slur her speech, or possibly emboldening her in her dealings with the caller, which never occurs.

The ending of course if you’re familiar with the legend has the police tracing the calls to a man who is upstairs in the same house that the sitter is, which forces the girl to run outside before the killer gets her, but the way it ends is not very satisfying. For one thing the girl’s welfare only gets eluded to by the cops even though she is the main character, so the viewer should see that she is alright and not just be told this. It also leaves open way too many questions like: Why did the killer choose this house? How did he know the phone number to the home? How did he get into the house without being detected? and if the children were already killed several hours earlier as the police stated then were they actually killed while the parents were still there and why didn’t anybody hear anything?

These questions get a little better answered in When a Stranger Calls, which was Walton’s follow-up film to this one that expands the story by analyzing the killer and giving him more of a backstory, which will be reviewed next.