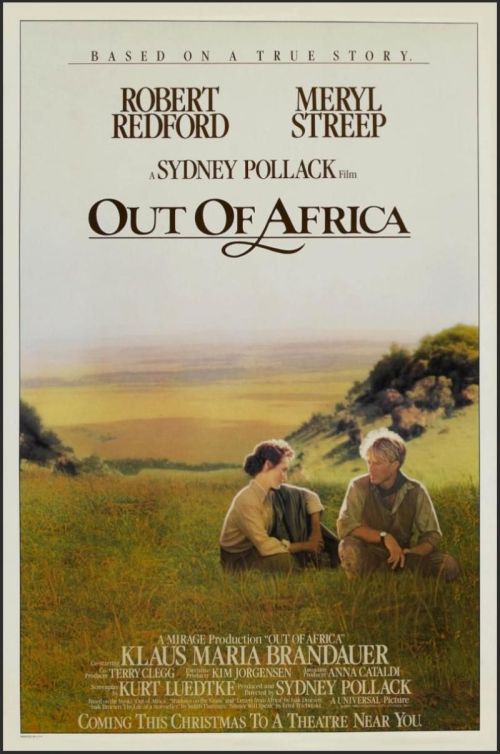 In 1913 a wealthy Danish woman named Karen Dinesen (Meryl Streep) gets spurned by the man she is in love with, so on the rebound she decides to accept the marriage proposal of the man’s brother, Baron Bror Blixen (Klaus Maria Brandauer) Despite the fact that neither she nor he are in love with the other, but decide to make it a marriage of convenience. They move together to Kenya where they plan to at first start a cattle farm, but it soon turns into a coffee plantation. Through the years Karen’s marriage to Bror begins to sour as he continues to have affairs with countless other women, so Karen turns her attention to the dashing big-game hunter named Denys (Robert Redford) and the two share a passionate and adventurous love affair, but when Karen tries to turn their relationship into a committed one he refuses.

The film, especially the first hour, comes off more like a broad sketch than a fluid story, or a highlight reel taken from a wide outline. I could never really get any type of handle of who this Karen person really was. I never understood why she would want to leave Denmark for Africa, or why she’d be so quick to settle down with a man that she didn’t love. So what if she got spurned by one guy there’s still other fish in the proverbial sea. Why not wait around for someone she could truly be excited about instead of just jumping in with someone that she really wasn’t?

To some degree I did find the marriage-of-convenience idea an interesting one. It’s rare that both parties admit that neither has the hots for the other, but still decide to make a go of it, which seemed like highly modernistic behavior especially for the time period and I was hoping this whole scenario would be explored more, but the film treats this mainly as a side-story that pretty much fades away after the first hour.

The introduction of the Denys character gets a bit botched too as he keeps popping in and out at the most convenient times out of literally nowhere, like when Karen finds herself ready to be attacked by a lion, and then just as quickly disappearing again almost like he were a magical genie.  The fact that Streep puts in so much effort into her Scandinavian accent, but Redford puts none into conveying an English one is off-putting. Supposedly Redford did initially try to speak with a light accent, but director Pollack apparently found it ‘distracting’ and advised him to speak without it, but in the process it makes the acting seem uneven.

It’s during the second-half where the film really comes together as it focuses solely on the affair though in real-life there was only a two year difference between Karen and Denys, but here there’s a 12 year difference between the actors playing the part and it shows, but despite that discretion this segment really works. I loved watching the different things that the couple did like playing a phonograph record to some monkeys and seeing how they responded to it and watching Karen taking an airplane ride for the first time and all the majestic scenery that she takes in.

The cinematography is indeed sumptuous and one of the things that holds it altogether even when the script jumps precariously and sometimes jarringly from one point in Karen’s life to another. The film would’ve worked better had it focused on only one area, like her relationship with Denys, which could’ve helped create a stronger, more immediate emotional impact with the viewer while also cutting down on the excessively long runtime.