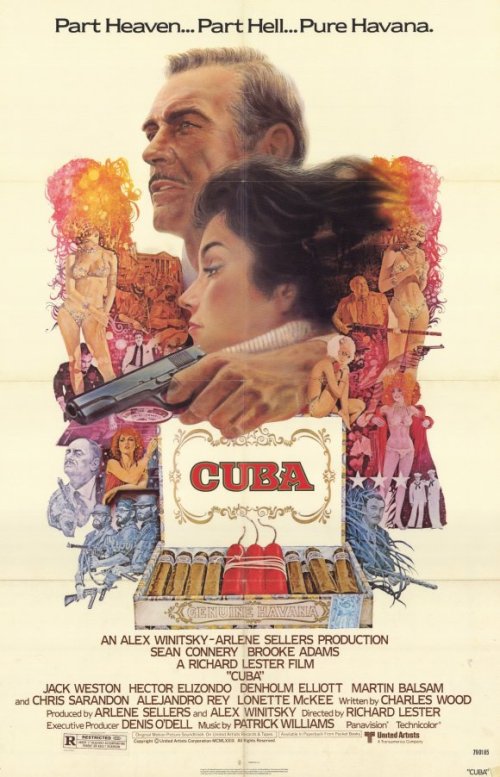 4-Word Review: Cuba during the revolution.

Robert Dapes (Sean Connery) is a British mercenary who travels to Cuba to train the army to resist the approaching forces of the revolution lead by Fidel Castro. While there he becomes reacquainted with Alexandra (Brooke Adams) his former lover who has 15 when he first knew her, but is now 30 and married to Juan (Chris Sarandon) who owns a rum and cigar factory that he inherited from his family, but run by Alexandra.

The film from a purely visual standpoint is a masterpiece with David Watkin’s cinematography giving a very vivid feel to the ambiance of the period by capturing not only the slums of the region, but the affluence as well. Despite being filmed in Spain it still manages to create an interesting Cuban atmosphere that has an intoxicating quality that makes it entertaining to watch even though the story especially during the first half doesn’t go anywhere.

The romantic angle really wasn’t needed. The idea was to create a Casablanca scenario, but it comes off as forced and cliched. The chemistry between Adams and Connery isn’t there and she appears far too young for him. She states that she is 30, but doesn’t even look that old and the fact that he was apparently having sex with her when she was 15, although the Connery character states that he thought she had been 17, is still something that won’t go over well with today’s audiences.

Connery doesn’t seem to be the best type of actor for this part either. For one thing the character should’ve been American as the Cuban revolution was more of a direct threat to the US than England. He also doesn’t have too much to do and his patented rugged brashness is missing. His characters usually take control of things, but here he’s passive and almost like he’s under a spell from the constant hot-and-cold act that Adam’s gives  him that eventually makes him come-off as benign and ineffectual. Jack Weston as a befuddled American businessman is much more engaging and would’ve made a better lead as he gives the thing some balance with needed light humor.

I also thought both Adams and Sarandon could’ve given more effort to create an authentic Cuban accent. Both are made to look Cuban, but they don’t sound like one. Adams seems to at times convey an accent while Sarandon makes no attempts to have one at all.

On the technical end  it works and is an impressive dramatic effort for director Richard Lester who was better known for slapstick comedies, but it misses the potential of a being a sprawling epic, which is where it should’ve gone. Constricting the whole thing to just two characters with Weston tagging along for momentary comic relief does not do the production justice. Instead it should’ve branched out into several different, interweaving story-lines that analyzed the unique perspectives and situations of the various people involved, which would’ve given the viewer a more robust viewpoint of this important moment in history.