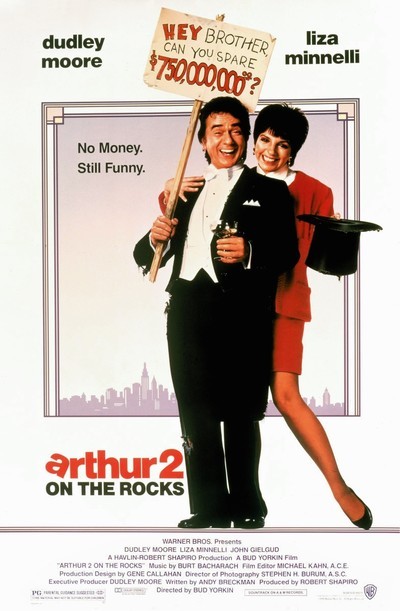 Arthur (Dudley Moore), still a boozing and irresponsible cad with a lot of money, finds out that Linda (Liza Minnelli), his wife of 6 years, wants to have a baby, but she can’t have one naturally, so they’re forced to consider adoption. They have a good initial meeting with the representative (Kathy Bates) at the adoption agency only to find that Burt (Stephen Elliot), still upset at the way Arthur jilted his daughter Susan (Cynthia Sikes) at the altar 6 years earlier, has taken control of Arthur’s inheritance through some wheeling-and-dealing and turned him into a poor man. Now for the first time in his life Arthur must find a job despite having no experience in the working world at all.

This sequel takes the idea of what I thought should’ve happened in the first film, but unfortunately botches it badly by creating a concept with too many loopholes. Exactly how does a man worth 750 million lose it all just like that? Wouldn’t he have some of that money stored up in the bank or in stocks? What about the money he would most certainly have tied up in assets and equity like the 6 homes that he mentions owning? Couldn’t he just sell those and everything he owns inside of them and use that money to remain solvent instead of going from super rich to super poor overnight?

Things get really overblown when Burt buys up every apartment building Arthur moves into and every company Arthur works for, so that no matter where he goes he’ll be assured of always getting fired or evicted. Yet Arthur was already doing poorly enough at his hardware store job, which would’ve gotten him eventually fired anyways without having to have Burt intervene. It’s also never made clear how Burt is able to find out which new company or apartment building Arthur is moving into or working for. Was there some person/spy following Arthur around and reporting back to Burt everything he was doing and if so this should’ve been shown, but never is.

Jill Eickenberry, who had played Susan in the first film, was unable to reprise her role due to working in the TV-show ‘L.A. Law’, so director Bud Yorkin had her replaced with his wife Cynthia Sikes. Sikes though plays the part much differently. In the first film Susan came off as a naïve, wide-eyed innocent, but here she is deliberate and mean. The contrasting personalities of the character don’t work and the film would’ve been better had the character just been killed off maybe in a suicide because she was so distraught at losing Arthur, which would’ve then made Burt’s nasty scheme at trying to get back at him make more sense.

The cast though does a decent job and there are some scattered laughs, but overall it’s flat and draggy. Chris de Burg’s opening song pales in comparison to the chart topping, award winning hit that Christopher Cross did in the first film, which only helps to set the lifeless tone for the rest of the movie.