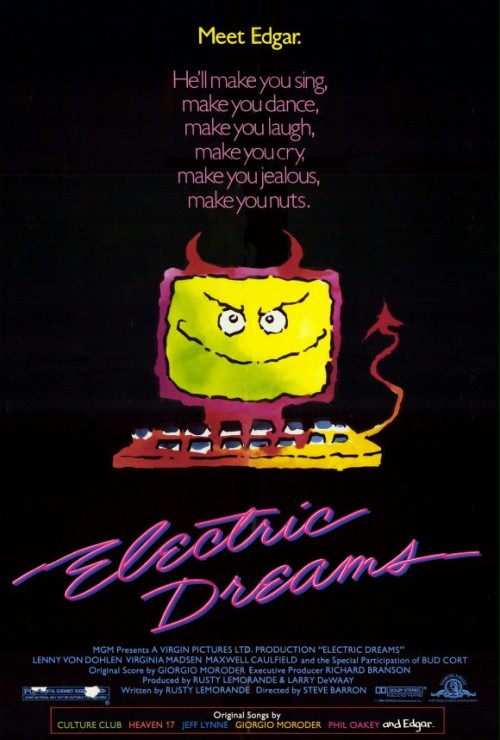 Miles (Lenny Von Dohlen) is a young architect seeking to get his life more organized, so he buys a personal computer (voice of Bud Cort) and sets it up in his apartment. A beautiful young cellist named Madeline (Virginia Madsen) moves in next door to him and practices her cello each day while at home. Miles’s computer, which goes by the name of Edgar, overhears her playing and falls in love with the sound and her in the process. When Miles becomes attracted to her the jealous computer tries everything it can to thwart their relationship.

I enjoyed the imaginative visual style implemented by Steve Barron in directorial debut. In fact it’s the film’s only selling point as the bland script offers little that is funny or interesting and drags on at a snail’s pace with hardly anything actually happening.

Sometimes it’s fun watching films from a bygone era and seeing how much technology has changed, but this thing gets so fanciful with it that it becomes illogical instead. Clearly the filmmakers had no understanding at how a computer actually works as this machine is able to do things that no normal PC could. For instance it’s able to make the knob on Miles’ door turn hot, so he can’t leave his apartment. It’s also able to connect to the servers of Miles’s credit card company even though this is before the advent of the internet and somehow shut off his credit. There’s also a scene where Miles pours champagne on the computer’s keyboard, which doesn’t permanently disable it even though we all know that in reality it would’ve.

It takes too long for the computer to become evil and then when it does it ends pretty quickly. The machine lacks a distinctive look and should’ve been made more ‘evil’ appearing, which would’ve helped coincide with the film’s otherwise flashy visual look. Bud Cort’s voice talents go to waste as it gets electronically altered until it’s unrecognizable and therefore could’ve been anyone’s.

Madsen is good, but the story is geared too much towards the preteens. The trite, overly innocuous script needed more bite, or an added edge to make it interesting to adults who will most assuredly be bored.