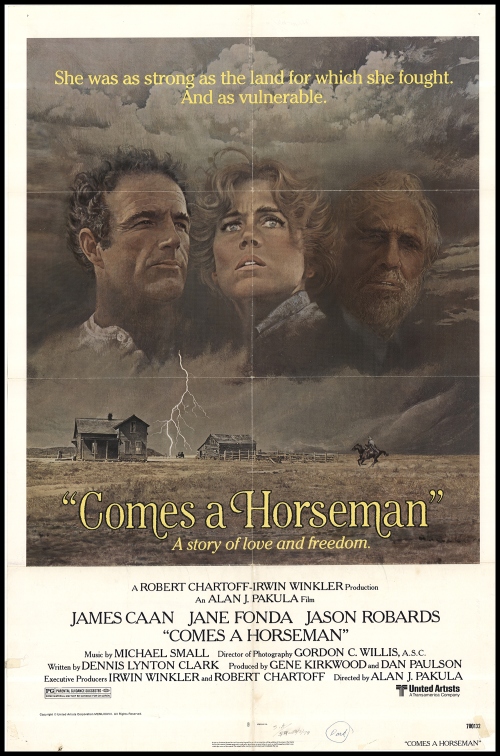 Recently widowed Ella (Jane Fonda) must struggle to run her ranch in the middle of the desolate west by herself. Frank (James Caan) is her neighbor who is being harassed by Jacob Ewing (Jason Robards) to sell his land and Ewing has also made a strong play for Ella’s property as well. Both refuse his offers and then band together to defend themselves and Ella’s ranch from Ewing and his men who are willing to do anything it takes in order to get what they want.

The film’s main charm is its stunning cinematography by Gordon Willis who captures the expansive western landscape in breathtaking fashion and this is indeed one film that must be watched on the big-screen, or in widescreen to be fully appreciated. Director Alan J. Pakula instills a wonderfully slow pace with a minimum of music, which gives the viewer an authentic feel for what life out in the country during the 1940’s must’ve been like.

I also really liked the fact that Ella and Frank didn’t immediately fall-in-love and jump into bed together. Too many times films made during the post sexual revolution depicted characters from bygone eras as being far more liberated than they really were and here they’re authentically reserved and in fact they don’t even show any affection for one another until well into the story and when it does happen it seems genuine instead of just sexual.

Jane gives an outstanding performance. Usually she commands the screen and gives off a sexual allure, but here she literally disappears in her role of a humble farm woman until you don’t see the acting at all. Former stuntman Farnsworth at the age of 58 makes an outstanding film debut in a supporting role that will emotionally grab the viewer.

The story, which was written directly for the screen by Dennis Lynton Clark, lacks depth and has too many elements stolen from other similar films. Stanley Kramer’s Oklahoma Crude, which came out 5 years has almost the exact same plotline, but done in a darkly comic manner. Both deal with a man moving onto a woman’s ranch to help as a farmhand. The woman initially rebuffs the male’s advances, but eventually softens. Both deal with an oil company pressuring her to sell her land and harassing her when she doesn’t and they both have a memorable scene involving a windmill.  The oil subplot, particularly in this film seems rather unimaginative and like it was thrown simply to create more conflict while Ella’s past relationship with Ewing and the dark secret that they share should’ve been more than enough to carry the picture.

The one thing though that really kills the picture is the ending where Ella and Frank find themselves being attacked and in an effort to build up the tension loud music similar to what’s heard in a modern-day thriller gets thrown in. This had been a movie that had been very quiet up until then and it should’ve stayed that way. The actions seen on the screen was more than enough to horrify the viewer and no extra music was needed. Hearing nothing more than the howling wind on the prairie would’ve made it more effective as it would’ve reminded the viewer how remote the location was and how no one else was nearby to help Frank or Ella. For a movie that tried so hard to recreate the feel of a past era only to suddenly go downright commercial at the very end is a real sell-out.

The fact that all the night scenes were filmed during the day using a darkened filter is another letdown. There have been many films that have been shot in actual nighttime darkness so why couldn’t this one? If you want to see a film set during the same time period with equally captivating visual approach, but stays more consistent in theme then I’d suggest Days of Heaven, which was also released in 1978.