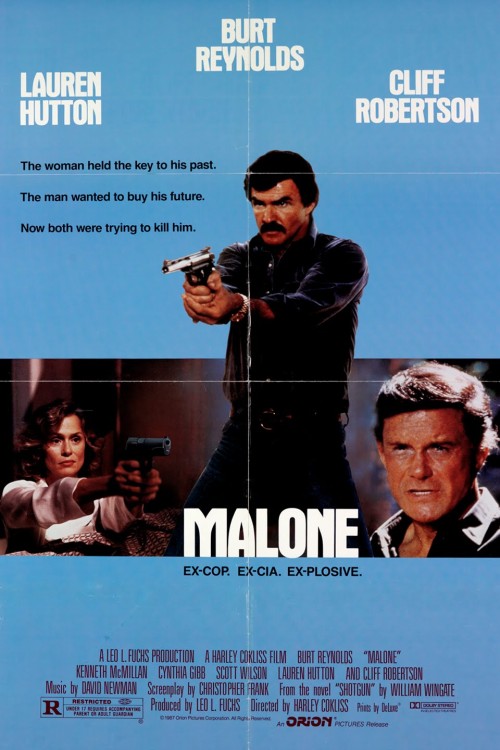 Richard Malone (Burt Reynolds) is a former CIA hit-man who decides that he’s had enough of the dirty business and wants to retire. He uses his savings to leave the profession and travel the countryside. On the way his car breaks down and he’s forced to push the vehicle to the nearest small town service station, which is run by Paul (Scott Wilson). Since the parts to repair the transmission will take several days to arrive he stays at the place and befriends Paul’s teen-age daughter Jo (Cynthia Gibb). He also becomes aware of a plot by billionaire Charles Delaney (Cliff Robertson) to buy up the town and force everyone to sell and if they don’t they end up dying. Despite his initial reluctance Malone ends up getting involved in the dispute and becomes Delaney’s number one target in the process.

The movie is based on the novel ‘Shotgun’ by William P. Wingate, which in turn was modeled after the formula from the western Shane. It reminded me more of High Noon particularly the way Malone single-handedly takes on not only Malone, but all of his cohorts during a gun battle at the end, but without that film’s strong emotional impact. The story and characters are highly uninspired and this thing is aimed towards those that like their action flicks on a very simple and predictable level.

Reynold’s presence is the only interesting ingredient. This was during the downside period of his career where he was desperately trying to get back to the tough guy action roles that had made him famous. However, during the 70’s his action guy persona worked more in the humorous vein where his character would always approach the situation with a twinkle in his eye and funny side-quip, but here he’s all stiff and serious. To a degree this proves he’s a good actor in that he can play either type of role effectively, but the funny-Burt is far more entertaining than the serious one. Either way it’s doubtful that this middle-ager would’ve been able to run so vigorously and climb onto the rooftop of buildings as he does when he gets onto Delaney’s estate and I’m pretty sure a stunt double was used since we only see him doing this from a distance.

An element of the film that audiences today may take issue with is his relationship with the teen girl who starts to admire him to an emotional extreme. Clearly she represents the Brandon deWilde role from the Shane film, but the fact that she is underage and starts to have a romantic interest in the 50-year-old and he in her and even kisses him on the mouth may make certain viewers uncomfortable.

As for the villain he is as dull and transparent of a caricature as it gets and Robertson plays him very poorly by conveying no menace on the screen and creating zero tension. It would’ve worked better had Kenneth McMillan, who plays the sleazy sheriff would’ve been cast in the Delaney part as he’s an actor with genuine panache and owns whatever scene he’s in no matter how big or small the role.

The ironic thing about this otherwise mindless excursion is it’s all about this far-right nutty guy who wants to take over the government to ‘save the country’ and even requires all his followers to say a corny patriotic-like pledge and yet it wasn’t even filmed in the US, but instead British Columbia, Canada. Even more frighteningly is that given today’s political climate it doesn’t seem quite as farfetched and over-the-top as it once did.