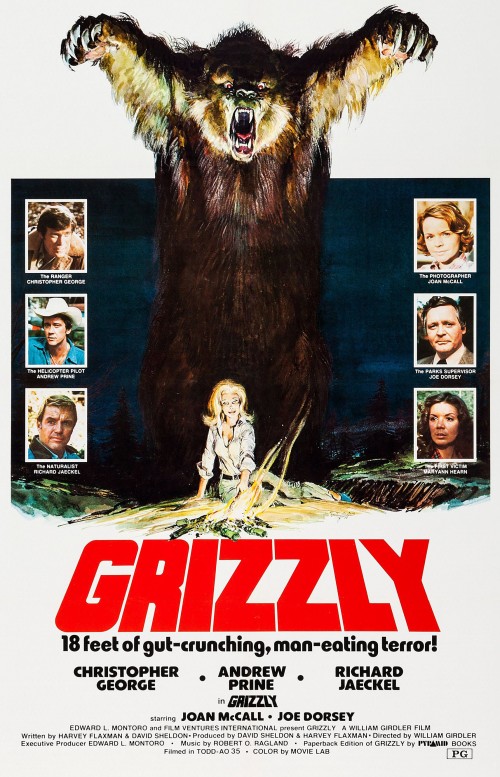 Inspired by an encounter that the film’s screenwriter Harvey Flaxman had with a grizzly while on a family vacation, the story centers on park ranger Michael Kelly (Christopher George) and his attempts to kill a giant grizzly bear that is attacking campers at a National Park in Georgia. Unfortunately his efforts are thwarted by park supervisor Charlie Kitteridge (Joe Dorsey) who refuses to close the place due to fear of negative publicity and invites in amateur hunters to find the bear that does nothing but create more chaos.

This is a blatant Jaws rip-off and follows the theme of that story quite closely including having three men team up to go after the bear just like the three men who hunted the shark and the impediment of a local political figure, which was a mayor in the Spielberg film and park supervisor here, whose concerns for lost revenue overshadows the obvious dangers to the tourists. At least in Jaws the characters were multi-dimensional while here they’re cardboard and Kelly’s confrontations with his supervisor are strained to the extreme.

The worst part is the killings which are some of the cheesiest you’ll ever see. A bear will attack someone and then in the next shot you’ll see an arm or leg flying through the air, or in Richard Jaekel’s case the head of the horse that he was riding on and then in the next shot a red paint splattered mannequin with a missing plastic limb. The tacky gore sends the film spiraling to such an amateurish level that the filmmaker’s would’ve been wise to have skipped these scenes altogether and simply kept things from the park ranger’s perspective who comes upon the bodies long after they’ve been attacked.

The story has no beginning, middle or end, but instead is just one long mechanical bombardment of pathetic special effects looped around the exasperated expressions of park rangers in their pursuit of the bear. The film also fails to sufficiently explain why the bear was in the forest when supposedly all had been removed, why he was so much larger than a regular bear or why one from the supposedly Pleistocene era would appear in this day and age and why he was behaving so strangely.

The park scenery, which was filmed in the autumn of 1975 near Clayton, Georgia is picturesque and probably the only good thing about the movie. It’s also nice that they used a real bear although he is clearly not a part of the actual attacks and much smaller than 15 feet, which is how the characters in the movie describe him, or 18 feet as he’s described in the film’s publicity poster. None of this though makes up for the film’s many lame elements, which are so bad it should be considered an extreme embarrassment to all those who were involved in the project.

This entry was posted in 70's Movies, Horror, Movies that take place in the South, Movies with a rural setting, Outdoors and tagged Entertainment, Harvey Flaxman, Movies, Review. Bookmark the permalink.