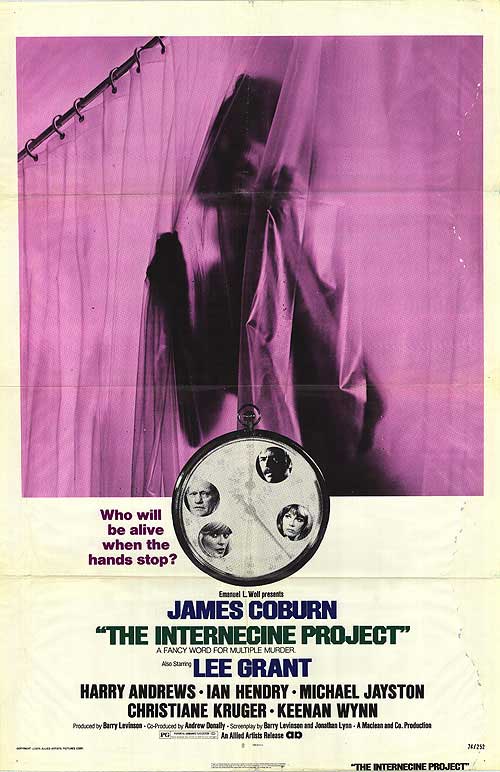 4-Word Review: Killing off his enemies.

Robert Elliot (James Coburn) is a former spy whose been given an offer as government advisor, but he must get rid of four people (Ian Hendry, Michael Jayston, Harry Andrews, Christiane Krueger) who hold secrets to his past before he can accept the position. To accomplish this he comes up with an ingenious plan, which consists of tricking these four to kill each other off all on the same night at around the same time while Robert sits comfortably at home and tracks their progress.

This is the type of intricate plot  that usually works best as a novel, but director Ken Hughes has things pretty well thought out. The first half isn’t too gripping, but once Robert’s scheme gets going it becomes quite intriguing. The plan certainly does border on being over-the-top and too dependent on the participants doing everything exactly as their instructed in order for it to be successful, but overall I felt it could’ve been possible, which is the main ingredient that makes it work as it manages to remain delicately within the realm of believability.

The supporting cast play their parts to the hilt complete with nervous ticks and flawed personalities, which helps add a fun dimension. Although clearly done on a modest budget the camera work and set design are creatively handled including one unique scene where the victim gets strangled by her killer through a shower curtain.

I also liked how one of the killers played by Christiane Kruger requires her instructions, which are given to her verbally by Coburn, to be repeated and written down as she is afraid she might forget them otherwise. I would respond in the exact same way even though most other movies in this genre will have the instructions spoken very quickly and only once, which would always make me wonder how they’re able to keep it all straight.

The only downside is the twist ending that seems like it was thrown in as a cutesy way to the end the film without much thought put into it. A really good twist should have some foreshadowing earlier that doesn’t seem all that important at the time and then when it’s all over allow the viewer to think back and go ‘A-ha, I should’ve seen that coming!’, but that’s not the case here.

If anything I would’ve had Lee Grant’s character more instrumental to the outcome as I could see no other purpose for her presence otherwise. I spent the whole film wondering why she was even in the movie and when it was over I was still asking that same question. She’s a beautiful lady, but her role is unfocused. One minute she’s feisty feminist and then the next she’s an emotionally needy wreck. She plays it well, but her efforts do nothing to propel the plot.