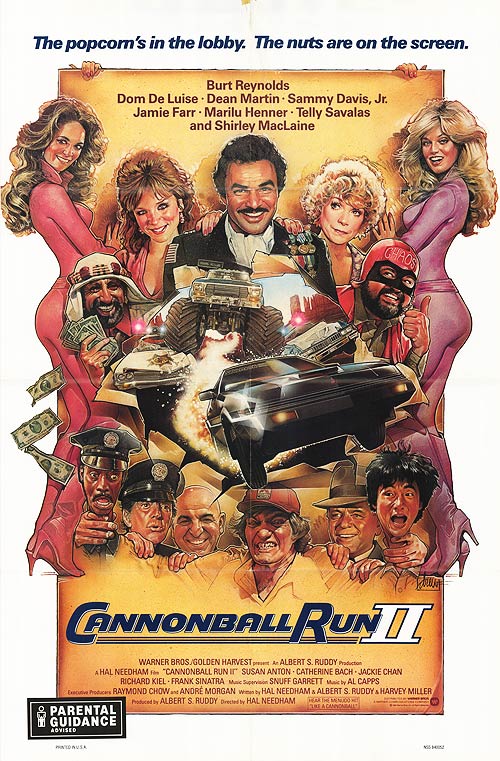 4-Word Review: Too much lame humor.

Since the first installment of this franchise ended up taking in $72 million and becoming the 6th highest grossing film of 1981 the studio heads in their typical fashion decided to capitalize on it and squeeze as much breath out of the cornball concept as they could, which lead to this ill-advised sequel. As lame as the first one was this one is even worse and even less focused on racing.

The actual race, if you can call it that, doesn’t begin until 45 minutes in with the whole first half spent dealing with the silly backstories of how each ‘zany character’ decides to get back into the event, which is all very unnecessary and just an excuse to bombard the viewer with an onslaught of stupid gags that are on a kindergarten level. Once the race does get going it’s spent dealing with cartoonish stunts and then ends with a long drawn-out fight between the drivers and some gangsters, which makes it seem like it shouldn’t be called a racing movie at all.

Roger Ebert described the film as “one of the laziest insults to the intelligence of moviegoers that I can remember” and he’s right. Some silly humor is okay, but there needs to be another added element. For instance in The Gumball Rally, which wasn’t all that great, but still far better than this, there was the same silliness, but at least there was also one scene showing from a driver’s point-of-view a car speeding down the closed off streets of Park Avenue, which was that film’s best moment. In Paul Bartel’s Cannonball! you had a horrific car crash, which was controversial, but at least gave it some sort of edge. This film has no edge it’s just one-dimensional stupidity from the first frame to the last. The opening sequence is almost shot for shot the exact same as the one in the first installment, which shows how limited writer/director Hal Needham’s creative well likely was.

The only interesting aspect about it as with the first movie is the eclectic cast. Dean Martin for what it’s worth looks much more energized here than he did in the first one and Sammy Davis Jr. is quite funny and if they had built the film around him it would’ve been an improvement. It’s also fun seeing Richard Kiel playing a more normal type of person and not just a doofus giant caricature like he usually got stuck with. However, this installment also has Alex Rocco and Abe Vigoda playing gangsters who try various inane ways to stop Jamie Farr’s Arab character from winning, which makes the stunts in an old Wily E. Coyote/Road Runner cartoons seem genuinely highbrow by comparison.

I was surprised to see Shirley MacLaine in this thing. She possibly took the part so she could reunite with her Rat Pack co-stars even though she never appears in any scene with them, but she had just gotten done winning the Academy Award for Terms of Endearment and it was like receiving all the accolades and prestige that comes with that award and then immediately throwing it all in the toilet by doing something that was completely beneath her talents. Her part is quite small and insignificant. Marilu Henner, who plays her partner as two out-of-work actresses disguised as nuns, comes off better and looks younger and prettier, which made me think Maclaine’s role could’ve been excised completely and simply combined with Henner’s.

What’s even more surprising is the presence of Reynolds. Back in 1982 he stated that he wasn’t going to do anymore ‘car chase movies’ and even turned down on an offer to star in Smokey and the Bandit III for that reason, so then why star in something that is just as bad or even worse. I think he can be a strong actor if given a good script and  I meet the man back in 1995 and shook hands with him during a book signing, so I don’t mean to seem overly harsh, but his brand became stigmatized by doing too many of these ‘good-ole’ boy’ productions and he was never able to recover. He had a brief renaissance with Boogie Nights, but that was about it. Starring in ‘Evening Shade’ doesn’t count because TV work is considered a downgrade from being in the movies and usually only taken when the movie roles dry up. The scene where he dresses up in a harem costume and pretends to be a female dancer is particularly demeaning and has to be considered an embarrassing career low point for any star that was once considered a male hunk.

Fortunately the audiences had wised up and after a strong opening weekend the film’s box office returns plummeted and it only ended up grossing $28 million, which was far less than the first one. This thankfully slowed up the need to make any more cannonball movies although in 1989 they made one more called Speed Zone, which because I’ve become very burnt out with these car racing flicks will be reviewed at a later time…a MUCH later time.