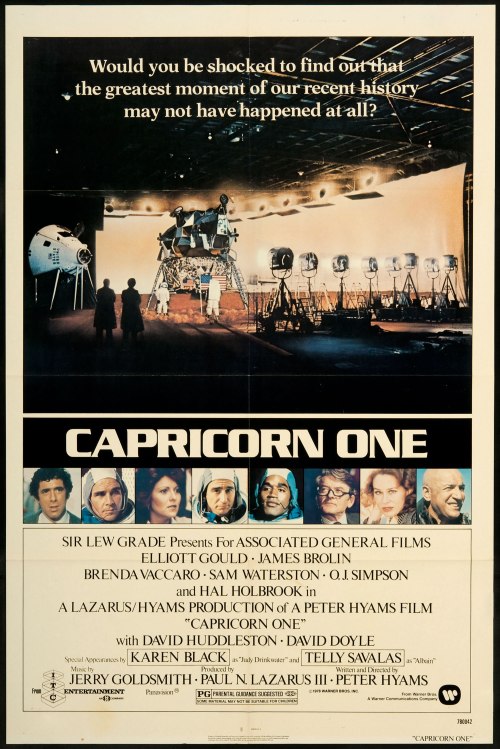 Due to finding out about having a faulty life support system James Kelloway (Hal Holbrook), who heads the NASA mars mission, decides to have the three astronauts (James Brolin, Sam Waterston, O. J. Simpson) removed from inside the rocket just before it is ready to blast off. He then allows the rocket to take off leaving everyone on the ground with the mistaken impression that the astronauts are still inside. The astronauts later walk onto a soundstage that is made to replicate the mars surface where they pretend to be walking on the planet live on television. As the rocket stays on mars the three astronauts remain trapped inside the NASA space center unable to let even their families in on their secret, but when the rocket returns to earth it gets accidently destroyed. Since the three men are still thought to be inside and since the government wouldn’t want to whole world to know it was a hoax the men are forced to make a daring escape across the hot desert in order to avoid being killed.

The script was originally written in 1969 and was an attempt by director Peter Hyams to take advantage of the moon landing conspiracy that was going on at the time, but no studio was willing to take it on, so it took 9 years and a change of planets before it finally got the green light. I’m not a big fan of conspiracy theories as I think a lot of them are too dependent on a great many people working together and being able to keep a secret in order for them to be pulled off. Since it’s hard for just two people to pull off a crime such as a murder without one eventually turning on the other, or breaking down under pressure, then it’s even harder to believe hundreds could keep quiet it in order to successfully pull off the so-called moon landing hoax, or that at some later time one of them wouldn’t have divulged the secret to a family member, friend, or even anonymously to the press.

In either case it’s an entertaining movie for the most part although the first hour is spotty and it only really gets gripping during second-half. To some degree I thought it would’ve been more interesting had the focus been on the people setting up the ruse and working to make the soundstage look like mars than on the astronauts. It also might’ve been more impactful to the viewer had they been given the idea that the landing was real and only when the men are seen walking on the mars surface does the camera pull back to show that it was all fake instead of revealing the conspiracy right from the start.

The problem that I had though was with Elliot Gould’s character. Don’t get me wrong I liked the way he plays the part as a sort-of disheveled, loser hero who strikes out with the ladies, but the fact that the government is on him so quickly and trying to kill him before he has even written one single report about the mars landing makes little sense. Later on he gets bailed out of jail by his boss, played by David Doyle, who openly admits to hating Gould and immediately fires him the second he pays his bail, but why spend company money on someone you don’t like and don’t want working for you?

The ending features a well photographed aerial chase through the skies that is very exciting, but the wrap-up in which James Brolin, who is the last surviving astronaut that manages to escape the deadly clutches of the government and appears to shock of everyone at his own funeral seems to ruin the premise. For conspiracy theories to hold their mystique there needs to be the idea that the bad guys were able to get away with it and that it is actually possible to successfully kill off all the possible leaks and manage to hold the rest to strict secrecy. By having someone survive only proves the point that I made earlier and thus makes all those other conspiracy theories that permeate modern culture seem dubious as well because mostly likely the same result would’ve ultimately happened with those that happened with this one.