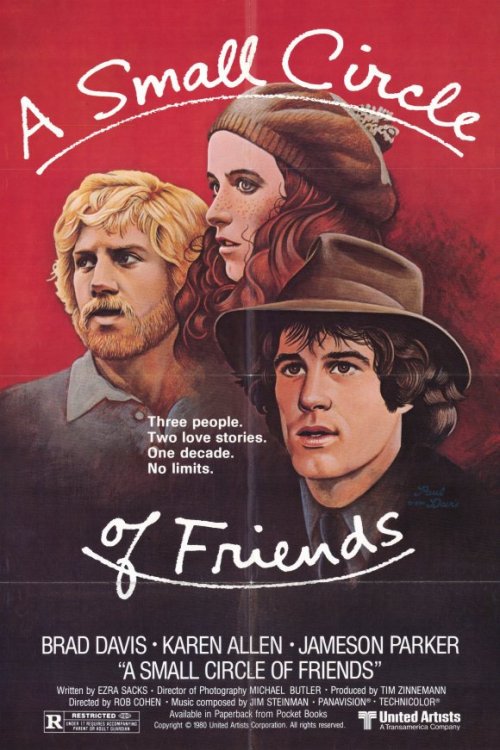 Leonardo (Brad Davis), Jessica (Karen Allen), and Nick (Jameson Parker) are students attending Harvard University during the late ‘60s. As they become intertwined with the events of that turbulent era they also form a strong bond that lasts through their school years and on into young adulthood. Leonardo has a relationship with Jessica at first, but it doesn’t work out, so Nick steals her away. Initially Leonardo is angered, but he eventually adjusts and the three later form a ménage a trois.

This was the first film directed by noted producer Rob Cohen and overall I liked the feel. The narrative is fragmented and dreamlike, but it also has a nice nostalgic quality. The script is broadly written, but still gives one a good sense of what life was like on a college campus during that period. The final scene where Leonardo visits an underground student revolution movement where they resort to violent, unlawful means to achieve social change I found to be the most compelling.

Davis gives another great performance and I’m always amazed at the way he can play an effective gay character such as he did in the homoerotic Querelle, but still manage to pull off being a flaming heterosexual too. Allen says little, but her piercing emerald eyes had me hooked on her regardless. Parker is stiff and boring, but still successfully works as an anchor to the other two who are aggressively idealistic.

It’s also fun to see Shelley Long in her film debut. Her character has little to do with the main plot, but watching her portray a man during a stage production while wearing a mustache and male body hair glued to her chest is a hoot.

Usually with these types of films the viewer gets treated to a plethora of overplayed period rock hits, but not here. Instead it’s a loud, booming orchestral score that gets both obnoxious and pretentious as it makes it seem like this is an epic of some kind when in reality it’s just a simple story of young people learning to cope in the real world and the music should’ve reflected that with a quiet folk rock sound.

The film also doesn’t take advantage of the unorthodox sexual activity of its main characters. Three friends, even in these more liberal times, rarely end up becoming a sexual trio. Having this story element introduced late and then quickly dropped is frustrating and should’ve been more explored as it is the one unique thing in an otherwise derivative film that is good enough to get a passing grade, but not much else.