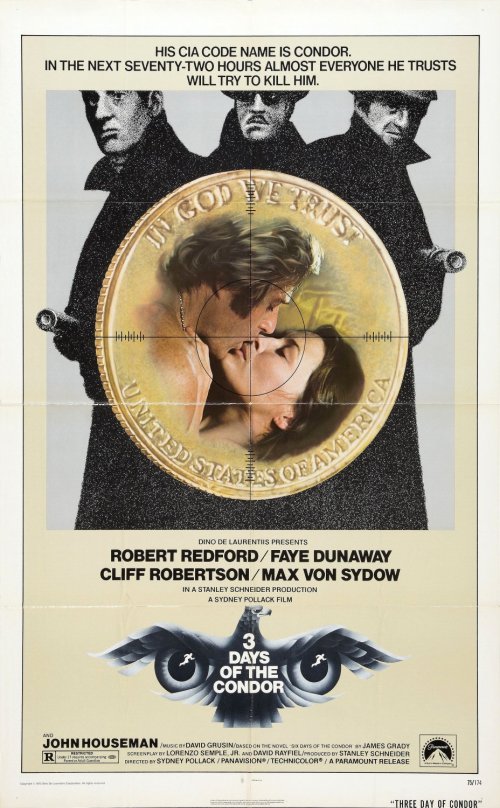 4-Word Review: Who can he trust?

Joe Turner (Robert Redford) works at a New York City CIA office, which fronts itself as a literary agency for historical books. One day Joe decides to sneak out the back way in order to grab some food at a local deli. While he is away a team of assassins headed by Joubert (Max Von Sydow) enter the place and kills everyone inside. Turner, who goes under the code name Condor, returns to find his co-workers dead and no idea who did it, or why. He contacts the CIA headquarters, which is run by Higgins (Cliff Robertson), but soon decides he can’t really trust them and attempts to somehow find a way to survive on his own without returning to his apartment, as he is afraid the killers may be there. Through sheer desperation he kidnaps a woman (Faye Dunaway) at gunpoint and forces his way into her apartment where he hopes he will be able to buy himself enough time until he can figure out what is going on.

The film, which is based on the novel ‘Six Days of the Condor’ by James Grady, has an intriguing set-up, but ultimately gets ruined by having a protagonist become too skillful and shrewd at everything until he ceases to be just a regular guy on the run. For instance he is able to get into a telephone switchboard center much too easily and then uses the skills he had apparently learned as an Army Signals Corps technician to trace a call and find the whereabouts of the bad guy, but this is something a regular person couldn’t do and thus the tension is lost because it’s no longer just an everyman trying to survive, but instead a super-smart individual with convenient knowledge for every situation.

The script has too many situations where the bad guys make unbelievable dumb decisions as well making it seem that the odds really aren’t as stacked against our hero as it initially seems. For instance there is a scene where Redford invades the home of the CIA Deputy Director (Addison Powell) who is supposedly the man behind-the-scenes who had ordered the hit. Redford sits in a downstairs office of the home and plays music very loudly from a stereo until it awakens the CIA director and he comes down to investigate, but wouldn’t you think someone who works in a secret organization would know enough not to walk into a trap as he does here, but instead call the police if he heard a noise downstairs, or if he does come down at least do it while also holding a gun? Also, as a CIA director living in a mansion he should certainly have his home rigged with a security system, but Redford is able to get inside without a sweat even though we are never shown how. Also, why does Sydow the hit man not shoot Redford when he is alone with him in an elevator, which would be a perfect opportunity instead of waiting and trying to do it later at long distance when the two are outside and Redford is in a middle of a crowd and much harder to target?

The film’s lowest point though comes with Redford’s relationship with Dunaway. Only a woman with severe mental problems would magically ‘fall-in-love’ with a stranger in less than 24-hours after he accosts her with a gun and forces his way into her apartment. Even if one would argue that it’s the Stockholm syndrome it’s highly unlikely it would occur so quickly.  There’s even a stylized love making scene that seems too similar to the sex scene in another Dunaway film The Thomas Crown Affair. Besides with all the stress that Redford’s character was going through I’d think he’d be unable to perform in bed, or concerned that she was simply leading him on in order to put him in a vulnerable position, so she could take advantage of it and escape.

Von Sydow’s character, who’s willing to switch allegiances almost instantaneously depending on who’s paying him, is the only truly unique thing about this otherwise shallow thriller. Director Sydney Pollack, who appears briefly as a passerby on a sidewalk, does give the material the slick treatment and captures New York City nicely. There is also a well-choreographed fight scene inside Dunaway’s apartment, but the unsatisfying, limp ending leaves open too many unresolved issues.