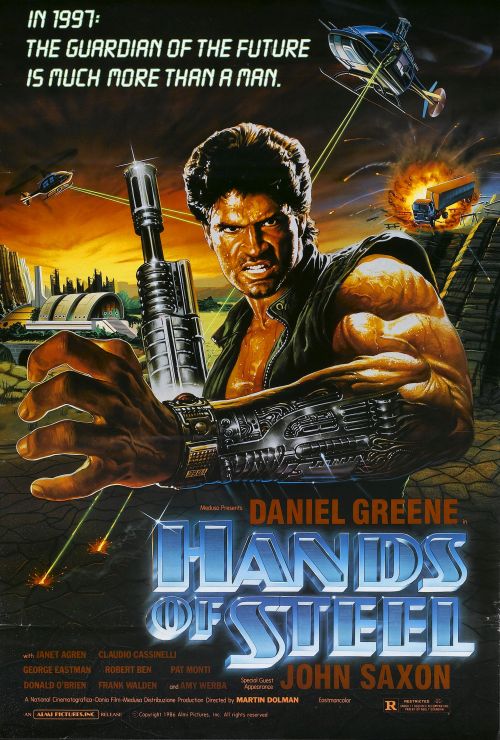 4-Word Review: He’s made of steel.

Paco (Daniel Greene) is a man who gets injured in an accident and then rebuilt as a cyborg in an operation financed by evil industrialist Francis Turner (John Saxon). Paco is then programmed to assassinate the head of a competing faction, but at the last second he is unable to do it, due to still harboring a conscience from his human side. He then hides out at a desolate Arizona hotel/bar run by the attractive Linda (Janet Agren) who he soon forms a bond with, but Turner and his men track Paco down and are determined to enact revenge for his disobedience.

The storyline could best be described as a variation to the Six Million Dollar Man. In that one a man was rebuilt to help the secret service on missions for ‘good’ while here the protagonist is programmed to carry out evil tasks, but refuses. It all might’ve been more interesting had it not been produced by an Italian film company where all the speaking voices are dubbed, which gives it an amateurish quality.

The isolated desert location only helps to make an already visually boring film even more so and the place certainly gets a lot of customers for being stuck literally in the middle-of-nowhere. The action is passable, but relies heavily on arm wrestling matches (yes you read that right) that are not exciting at all.

The plot features many logical loopholes that make little sense if you start thinking about it. For instance the cyborg gets shot at in close range, but he does not get injured or killed, but you would think the metal, circuitry or the skin surrounding it would still be affected or damaged. Later on when the bad guys are chasing him down in the desert by shooting at him from a helicopter the cyborg ducks out of the way from the bullets as if he fears getting hit by them, but why since we’ve seen earlier that they have no effect?

Greene’s performance is incredibly one-note and one of the main reasons the film is so boring. John Saxon is the only recognizable face in the cast although there is also George Eastman who played one of the killers in Mario Bava’s Rabid Dogs and appears as a similar type of baddie here. However, that film was way better than this one and more worth your time to watch.