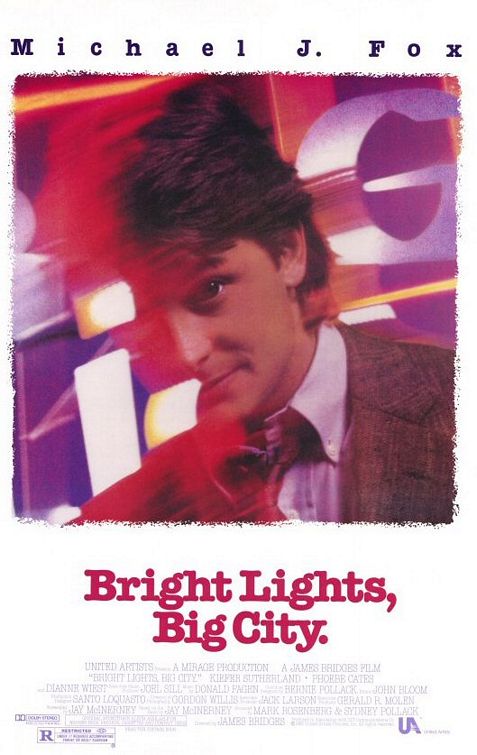 Jamie (Michael J. Fox) is a 24-year-old living in the big city and working as a fact checker for a national magazine. He spends his evenings hanging out at the clubs and taking cocaine while also reeling from the break-up to his wife (Phoebe Cates) and death of his mother (Dianne Weist). As his addiction worsens he loses his job and his entire life unravels in a matter of a week.

The first half-hour is excellent as it gets the vibe of city life as well as the ‘80s subculture just right. The club scenes has an authentic feel and the stresses and politics at his job all ring true and this is a far better portrait of corporate life in the 80’s for the upwardly mobile than The Secret of My Succe$s, which Fox did just previous to this one.

The film also contains a few outlandish moments including a surreal one where Jaimie dreams of speaking to a fetus that is still inside a mother’s womb that is worth checking-out just for its amazing special effects. A later scene, where Fox and his friend Kiefer Sutherland release a ferret inside his former boss’ office, gets too wildly silly and should’ve been excised.

Fox is good in a difficult role and I liked the idea of this all-American young actor taking on a more edgy part. His youthful, clean-cut looks contrasted against the jaded backdrop of the nightlife helps make the shock effect even more profound as his personality slowly disintegrates. However, the scene where he tries to ‘reconcile’ with his ex-wife while she is on the runway modeling fashion clothes and in front of hundreds of people makes his character look ridiculous and irrational.

Cates is cute, but I didn’t like her short hair and she speaks only a few words during the whole thing although the part where she gets plaster smeared over her face and is only able to breathe through straws stuck in her noise is interesting. Swoosie Kurtz though as Jaimie’s loyal co-worker behaves in much too idealized fashion to be believable. If a woman invites a man over to her apartment for dinner it’s most likely because she has a romantic interest in him and will not be so selflessly gracious to want to sit around and listen to him go on-and-on about the break-up with his wife that he is still emotionally attached to, nor want to offer him money that she knows she’ll never get back.

Wiest as Jaimie’s mother is miscast as she looks too young to be his parent and in reality was only 13 years older than Fox. Having her character want to hear about her son’s sexual conquests with other females and even seemingly getting off on it as she listens to it is just plain odd and not like any mother I’ve ever seen. Her dying sequence comes off as contrived and something that was thrown in to get the audience to be sympathetic to its main character, but it proves pointless. A person doesn’t need the loss of a parent to become hooked on drugs as being around people that do it is enough of a motivator and the film would’ve been stronger and less glossy had it taken this approach and avoided the soap opera side-trips.

The shallow ending offers no insights except to say that ‘drugs are bad’. The drama gets so protracted that by the time our protagonist does have his meltdown, which is while attending a chic party, it feels more like a relief because it signals that the thing is finally coming to an end in a story that is too unfocused to be convincing.