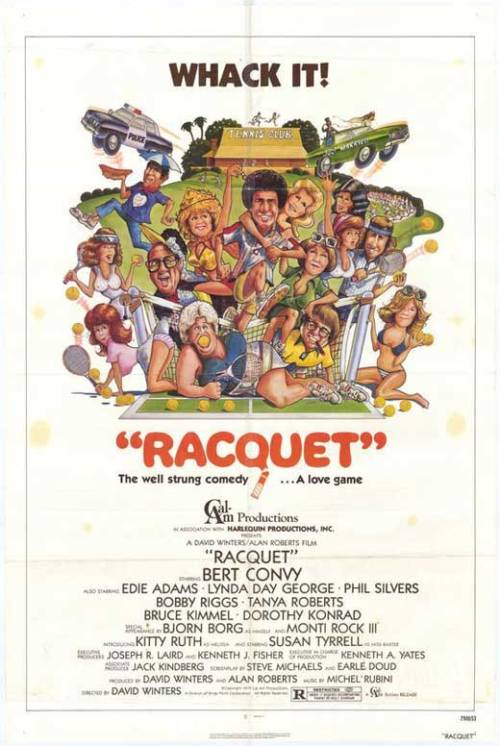 Tommy Everett (Bert Convy) is an aging tennis star who is learning to accept that he no longer has the skill that he once did. His life though is not in order and he needs money so that he can purchase his own tennis court and use it to give lessons to the rich clientele of Beverly Hills. Since he doesn’t have the capital for a down payment he sleeps with Leslie (Edie Adams) who is the wife of Arthur (Phil Silvers) a rich financier. During their lovemaking he asks her for the cash and she initially agrees even though she doesn’t intend to come through with it. In one last attempt to prove his virility he decides to take on tennis great Bjorn Bjorg in a televised match that he hopes will prove that he still has what it takes.

This so-called comedy is so frighteningly unfunny that you have to wonder why anyone would’ve been paid to write-it as its desperate attempts at humor are downright embarrassing. The script went through many rewrites and it shows as there is no cohesion and the action meanders badly until it all becomes quite pointless.

Supposedly this was an attempt to cash-in on the success of Shampoo, which was far better and so superior to this one it’s isn’t worth trying to compare except to say that was a classic and this isn’t. The jokes here are too strained and the innuendoes so juvenile that it makes sitting through not worth it on any level. The movie would’ve been improved had it stayed focused on the tennis angle, but instead it goes off on Convy’s romances and sexual conquests until you completely forget about the tennis part until it finally goes back to it at the very end.

Convy’s presence, especially in the lead, makes things even worse. He was a great game show host, but in the acting realm he was a hack to the point that he comes off looking like he never had even a day of acting training.

The supporting cast if filled with an array of familiar faces, but due to the script’s limitations end up being badly underused. Susan Tyrrell’s take of a snobby real estate agent should’ve been great, but isn’t. Tennis legend Bobby Riggs is fun, but not funny and Dorothy Konrad gets a few laughs, but it all comes at the expense of her obesity, which is tacky.

Phil Silvers is the only good thing in the movie and he even manages to elicit a few chuckles especially the part where he dresses and acts like a giant turkey. Yet even this, like with everything else in the film, is pretty sad and only proves to what pathetic extent it was willing to go to just to get a cheap laugh.

Available: None at this time