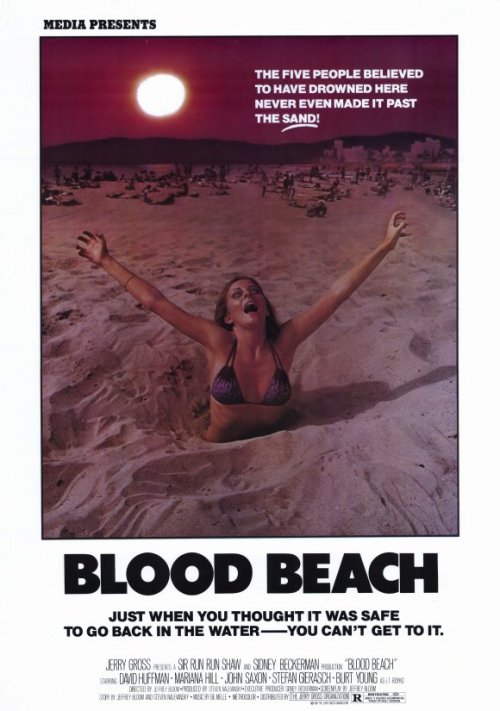 4-Word Review: Beachgoers get sucked away.

Something is lurking beneath a Southern California beach and it’s not human. People and even animals are being sucked underneath the sand and disappearing, never to be found again. Lifeguard Harry (David Huffman) tries to do some investigating while starting up a relationship with the daughter (Marianna Hill) of one of the victims, but his efforts prove futile, so the police are called in, but do no better.

One of the nice things about this movie is that unlike most other horror films from that era it actually has a pretty decent budget and distinctive music score. The beach location, which was filmed at Santa Monica, makes for a pleasant diversion from the usual horror settings and the one thing I came away liking most about the movie.

Huffman, who ended up becoming a homicide victim himself in real-life only a few years after this was filmed, is bland to the point of being completely forgettable. However, the much more talented supporting cast gives the film some life. John Saxon is great as a brash and gruff police captain. Burt Young and Otis Young are amusing as police detectives with completely contrasting styles with Otis playing an amusing extension to the character that he did in The Last Detail where he tries earnestly to reel in his more undisciplined partner.

The film’s weak point is the second act that stalls without enough new twists being brought in. Seeing people constantly being swallowed up by the sand becomes monotonous and it takes way too long before we finally get an understanding to what is causing it. The film also has some quick cutaways showing what happens to the people once they are underneath the sand, which looks like it was spliced in from a cheaper film stock with tacky special effects that may simply be a product of the ‘Complete and Uncut’ version that I saw, but should’ve been avoided.

The attempt at doing a Jaws formula storyline on land instead of the water doesn’t work and only helps make the original seem all that much better. Had this been done as a parody might’ve helped it.

The biggest letdown is the ending that never fully explains what this creature is and only gives the viewer a brief glimpse of it during the film’s last few minutes, which is disappointing. The story then goes full circle by showing the sand ready to swallow up more unsuspecting beachgoers while making the viewer feel like they’ve wasted 90 minutes of their time watching a film that doesn’t progress anywhere.