4-Word Review: Where are the schoolgirls?

On Valentine’s Day in the year 1900 a group of Australian schoolgirls and two teachers (Vivean Gray, Helen Morse) set out to a rock formation known as Hanging Rock for a picnic. While there one of the girls named Miranda (Anne-Louise Lambert) decides to go exploring and three of the other girls follow. They proceed to climb the rocks, which frightens one of the girls (Christine Schuler) who runs back. By that evening the other three haven’t been located and a search party goes out by the local police to find them, which only leads to more questions than answers.

If one is in to mood pieces then this thing will be the perfect fit. The music and director Peter Weir’s ability to capture the rock formations in a way that makes them seem creepy and menacing is very well done. I found myself being strangely captivated most of the way while also impressed that the whole thing gets captured through a camera lens with a piece of bridal veil hung over it.

The story is based on the 1967 best-selling novel of the same name by Joan Lindsay. Despite many rumors to the effect and a follow-up novel called ‘The Murders at Hanging Rock’ this was not in any way based on a true story. Originally Lindsay wrote a resolution to the mystery that had the girls entering into some sort of time warp, but at the last minute that chapter was excised at the suggestion of her publisher, but then later published in 1987 as ‘The Secret of Hanging Rock’. 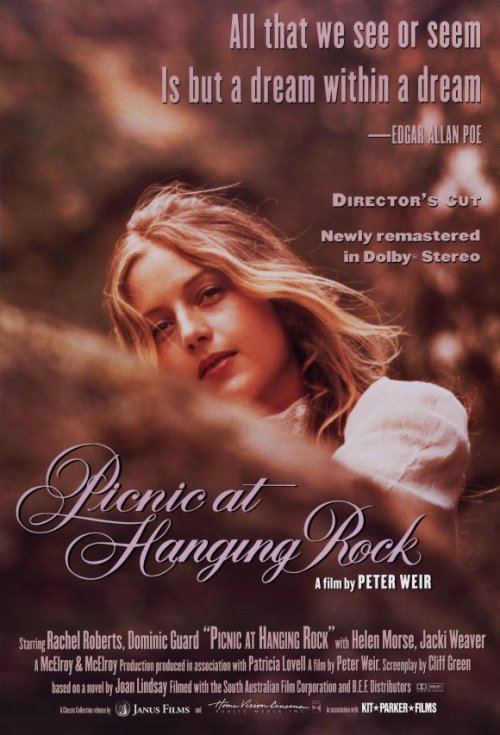 The film on the other hand offers no resolution of any kind. Instead like in the book the main emphasis is on how the disappearance affects the people at the school and in the town. Rachel Roberts is a standout in this area playing the strict headmistress Mrs. Appleyard who initially comes off as quite composed and in control, but as the toll of the mystery continues her character unravels in increasingly more shocking ways, which is the film’s highlight.

Despite its cult following and the fact that it is included in the book ‘1001 Movies You Must See Before You Die’ I still came away frustrated and feeling like not enough happened to justify having to sit through two hours of viewing. On the technical end it is excellent and watching the different ways people cope and respond to the mystery is interesting, but this could’ve been played up a lot more.

Sometimes movies with vague endings are good as life doesn’t always give us nice and tidy wrap-ups, but this is one instance where it would’ve been better had there been more of a conclusion even if it had just thrown out some clues and then allowed the viewer to come to their own deductions. To some extent it does this as supernatural elements are introduced as well as the idea that it might’ve been a sexual crime, but even this is off-putting because it’s not connected to anything concrete or tangible and thus makes it all the more evasive.

Had this been based on an actual mystery, which for years is what a lot of people thought, then it would’ve been more acceptable and even fascinating, but the fact that it’s all made up hurts it and tears away the mystique that for a long time it relished under.

This is a 2014 pic of Anne-Louise Lambert, who played Miranda in the film, sitting at the location of where the movie was filmed.