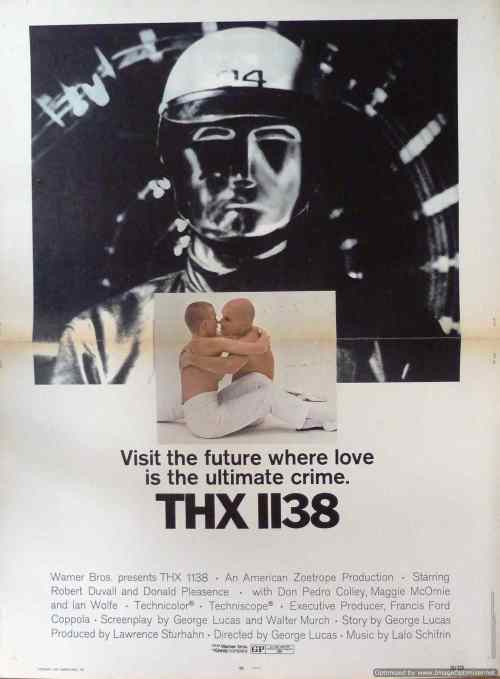 4-Word Review: Sex is not allowed.

THX 1138 (Robert Duvall) is member of a futuristic, work camp-like society where everyone has shaved heads, forced to take drugs to control their emotions and avoid having sex, which is forbidden. His days are spent on the production line where he helps build police androids and at night he goes home to an apartment where he rooms with LUH 3417 (Maggie McOmie). She is unhappy with her situation and stops taking the required drugs while replacing THX’s with placebos. The two begin a sexual affair and are promptly arrested. THX is thrown into a modernistic prison that has no walls or bars and he eventually decides to attempt a daring escape with the help of SEN 5241 (Donald Pleasence) and a hologram known as SRT 9 (Don Pedro Colley).

This story is an extension to the student film that director George Lucas made while attending the University of California film school. That film was a 15 minute short entitled Electronic Labyrinth: THX 1138 4EB, which dealt with a man trying to escape from a futuristic world while being chased and monitored by government run computers. It won first place in the 1968 National Student Film Festival and was good enough to gain the attention of Francis Ford Coppola who offered to produce a feature film dealing with the same basic premise, but having more of a background to the character and his reason for escaping.

Reportedly Lucas considers this to be his favorite project and despite the fact that it did not do well at the box office I consider it to be his best stuff as well. The visuals are imaginative and striking and make you feel like you are entering a whole new world unlike any that had ever been created before. I especially liked the prison scenes where the characters are surrounded by nothing but an unending white as well as THX’s medical examination done exclusively by robotic arms. Having the characters framed towards the side of the screen instead of the center while action occurs just out of view helps accentuate the off-kilter vibe and was year’s ahead-of-its-time.

Even though there is very little dialogue or music the sound becomes an integral part of the film by relying on comments made by the androids who tell the people in a HAL-like tone to ‘stay calm’ as well as the state sanctioned god known as OHM who routinely advises his followers ‘to be happy’. The best part though comes when two techs have a casual a conversation while viewing through monitors the torture of THX.

The film is visually groundbreaking and one of the greatest directorial debuts of any director living or dead, but it still comes with a few caveats. One is the fact that the plot relies too heavily on the stereotypical Orwellian view of the future where everything is worse than it is today and people no longer have any individual rights. Yet technology has proven to make life increasingly easier for people and with more freedoms and options, so why would everything suddenly revert the other way? Maybe they were survivors of a nuclear holocaust and this society was humankind’s way of ‘starting over’, but that’s never made clear and it would’ve been nice to at least get a glimpse of the person, or people who were behind-the-scenes with the ultimate authority as well as some sort of backstory.

There is also the fact that everyone in this society needs to be working, but jobs today are increasingly being lost to automation every year and that trend will continue. Certain nations like Finland are already experimenting with paying their citizens a basic salary because there are more people than jobs available.  Citizens of future societies are predicted to have more free time than ever before, so why doesn’t the world in this film follow suit? If this society can build android cops why can’t they also build robots to do the all the other jobs too, which would then allow the humans to have more of an idyllic existence than a workaholic one?

I also wasn’t too crazy about the 2004 digital restoration, which added new special effects and footage. I last saw this film in 2001 and could tell right away that this version had been tampered with. I realize that Lucas has been known to do this with his Star Wars films, but to me it’s as bad as colorization. Why mess with something that is already good? The added computer effects does not ‘enhance’ anything, but instead desecrates the original vision and treats it like it were a video game than a movie.