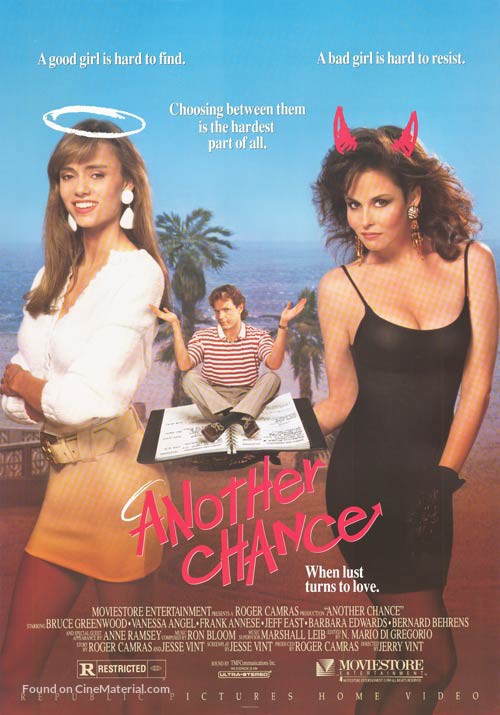 John Ripley (Bruce Greenwood) enjoys trying to bed every attractive woman that comes along. He even has his dog Rocky trained to bite on their purses and lead them over to him wherever he may be sitting. He is a big star on the daytime soaps and uses this position to take advantage of every young, nubile starlet willing to go to have sex with an established actor if it can in some way help boost their career. Then he meets the beautiful Jackie (Vanessa Angel) and starts to have strong feelings for her, but she catches him with another woman and it’s all over. He tries to win her back, but in the process loses his job and home. While working a part-time gig at a look-a-like show he gets into an ugly confrontation with a psychotic man resembling Humphrey Bogart (Robert Sacchi) who pulls out a gun and shoots him on the spot. John then finds out that he has been banished to hell, but pleads for one more shot at redemption, which he is given, but only if he can win back Jackie’s heart.

The film, which was written and directed by B-actor Jesse Vint, certainly has a crazy wide open storyline that seems to want to mix in the mindset of today’s modern world with that of spiritual one, which doesn’t work at all. Initially I thought the heaven and hell thing was thrown in simply as a plot device, but the more it continued the more I became convinced that this movie was intended to be religious one even though it gets enveloped inside the jaded world of modern day Hollywood, which just makes it all the more loopy.

In more competent hands this might’ve worked as an interesting curio, but the script needed to be better focused and the editing much tighter. The narrative is too heavy-handed to take seriously and everything gets photographed in a flat sort of way making the whole thing seem on par to a TV-movie instead of a theatrical one.

Greenwood gives an engaging performance and helps make a potentially unlikable character more tolerable. Angel is good too and it’s too bad she couldn’t have been in more scenes. The supporting female cast is overall quite attractive, but they’re all made to dress and act like bimbos. Anne Ramsey is on-hand for a brief bit as John’s crabby landlady and Allan Rich has a supporting role as a sleazy agent, but overall the one thing I liked most about the movie was Rocky the dog and that’s about it.