Peter and John (Richard Benjamin, James Brolin) are two buddies who decide to take the vacation of a lifetime by visiting an amusement park that replicates the old west. The people inside the park are actually robots who are so lifelike that it’s almost impossible to tell them apart from humans. Gunfights, barroom brawls and even whorehouses are the name of the day. At first both men enjoy their stay, but then the robots begin to act erratically especially the nameless gunslinger (Yul Brynner) who chases Peter throughout the park determined to kill him and no one, not even the technicians running the place, are able to stop him.

Michael Crichton’s directorial debut is a smashing success. The film is compact making for maximum use of tension and excitement and I liked how some sequences were done in slow motion. What I liked most about the film though is the way it gives the viewer a three dimensional viewpoint. Not only do we see things from the perspective of the main characters, but also the technicians behind the scenes and at one point even the robots.

The story brings out many interesting themes. Most people will jump on the man-versus-machine concept, but the one I liked better was how we have these suburbanite males living otherwise cushy lifestyles deciding they want to ‘prove their manhood’ by roughing it in some sort of adventure setting. However, pretending to be ‘rough and tough’ cowboys means nothing when ultimately it’s all still in a safe and contained setting where ‘nobody gets hurt’. In the real west there was no such things as ‘time outs’ or ‘safe places’, which is why I actually found it quite amusing when the robots do go berserk because it was the one thing that kept these suburban softies egos in-check and gave them a true taste of what the west was REALLY like.

A few things though that did bother me was the scene where Peter has sex with one of the female robots and enjoys it, which seemed weird to me because I would think having intimacy with a machine would have to feel way different than one with a human. We are told earlier that the only way to tell these robots apart from real people is by looking at their hands, which the technicians apparently haven’t yet been able to perfect and yet they were somehow able to get the vagina ‘just right’?!

I also found the idea that these robots would be given guns with real bullets to be absurd. Apparently the humans are also given real guns, but they’re equipped with sensors that detect body heat and therefore will shut off if aimed at a real person and if that were the case then the robots guns would do the same and therefore the scene where the gunslinger shots and fatally injures one of them would be negated.

I also found it equally preposterous that these same techs who were able to create such brilliant life-like robots would be dumb enough to make a control room that would lock-up when the power shut off and not allow them to escape. Certainly someone during the building stage would’ve had the brains to think up a secondary, emergency route to use should that situation occur, which makes the scene where they all suffocate seem quite laughable.

Having the robots all malfunction due to some ‘contagious-like disease’ that runs rampant amongst them didn’t really register with me either. To me it’s an overblown concept that would’ve worked better had it just been the gunslinger robot that goes crazy and relentlessly chases the two. He may even kill others who do try to stop him, which I think would’ve heightened the menacing quality of the Brynner character, which is already strong, even more.

Overall though it’s still a great movie with a terrific performance by Brynner as well as Benjamin playing a sort-of everyman who seems wimpy at first, but eventually learns to survive by using his brains over brawn. 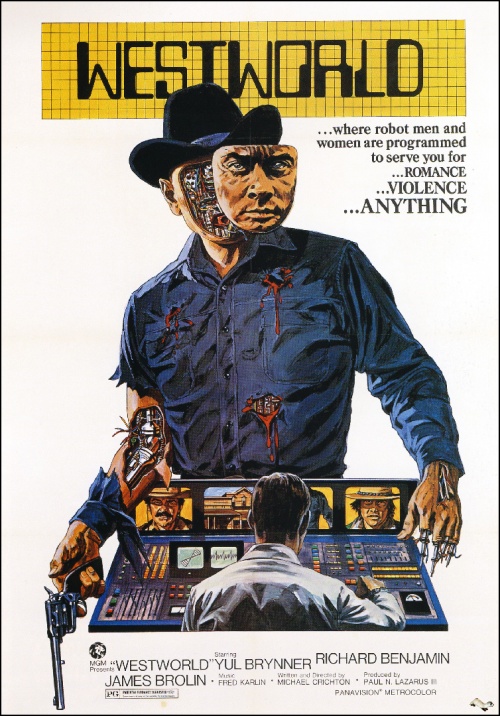