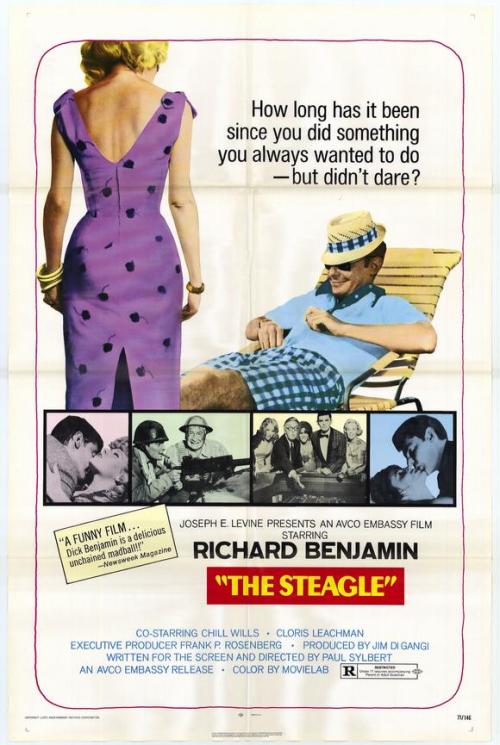 4-Word Review: Living out his fantasies.

The year is 1962 and the Cuban missile crisis is in full-throttle. The threat of a possible nuclear war has everyone on edge and having to hear about it every night on the news just makes things worse. Harold (Richard Benjamin) decides to use this opportunity to ‘escape’ from his drab existence. Both his marriage to Rita (Cloris Leachman) and his job as a college professor have grown stale. If the end is near then Harold wants to live-it-up to the fullest, so he travels to Vegas, has sex with hot women while also living out other outrageous fantasies.

The film was directed by award-winning set designer Paul Sylbert and for the most part, at least at the beginning, is right on-target. The mood and design looks authentically like the early ‘60s and the story nicely taps into the secret fantasy life that most likely harbor in the back-of-the-minds of just about every middle-age person out there. The viewer effectively feels Harold’s frustration during the first half and then just as effectively feels the rush when he finally decides to break free and go wild.

The story is consistently amusing throughout with the most memorable bit coming when Harold decides to speak in gibberish while giving a lecture to his class. Benjamin is perfect for the part playing a character with a snarky, sarcastic personality that hides just beneath his otherwise formal veneer. Ivor Francis is great in support as a minister who Harold meets on his travels that, like with him, wants to escape from the shackles of his daily existence. Chill Wills is good too playing a loopy ex-actor who thinks he’s Humphrey Bogart and traps a group of men inside a bathroom and won’t let them out until after they hear his rendition of a scene from The Maltese Falcon.

The film’s biggest drawback though comes from the awkward transition between Harold fantasizing about these things and then finally deciding to go through with it. The film never bothers to show how he manages to get away from his wife and kids. Does he sneak out in the middle of the night unannounced, leave a note, or simply tell them that he needs to ‘get away for a while’? Nothing is ever shown even though I felt that this scene was quite crucial and needed to be put in. The ending is equally frustrating as we never find out what happens when Harold finally decides to go back, which makes the film as a whole come off as incomplete and one-dimensional.