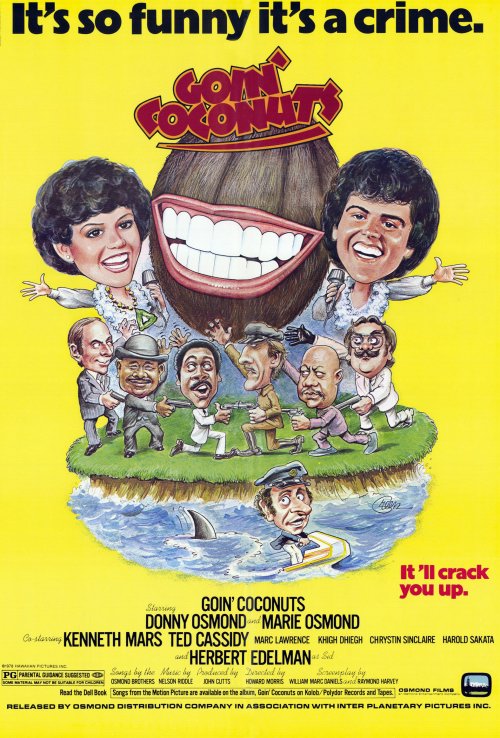 Donny and Marie Osmond, the brother and sister act from Utah who had a short-lived variety show on ABC during the late ‘70s, take their act to the big screen in this thinly plotted comedy aimed solely at the kiddies. The story has them flying to Hawaii for a performance, but not before a mysterious Priest (Jack Collins) hands them a necklace. Marie decides to wear it not knowing that it is stolen and wanted by various and competing criminals. Will the non-stop barrage of attempts that the thieves make to get the necklace back end up driving the pair nuts? Will this break up their act or better yet will any of this cause you not to sleep at night?

I think the funniest thing about this flick is that it took two writers to come up with a concept that a 6-year-old could’ve thought up in less than a minute. The script is clearly threadbare material and the forced hijinks and ‘zany’ villains aren’t any better. I realize this is aimed at the younger crowd, so one must measure it in a different way, but even so it doesn’t have enough action or special effects to hold their attention and kids of today will probably have no idea who Donny and Marie are or even care.

I realize the Osmonds have been plagued their whole careers with their ‘goody-goody’ image that at one put even gets made fun of by the Kenneth Mars character, but with that said they’re still quite likable and they really can sing rather well. I liked some of their brother-sister banter and the gender bending scene of having Marie driving a motorcycle. I was also impressed with how mature these two were especially when you consider that Donny was only 20 at the time of filming and Marie was 19.

The recognizable character actors who make up the supporting cast helps a little. This marks the final film appearance for both Ted Cassidy and Khigh Dheigh. In Cassidy’s case I was genuinely surprised to find that he passed away less than 3 months after this film’s release as he appeared quite young and energetic.

Mars does another of his over-the-top caricatures that closely resembles the one he did in The Producers, which should make it old and tiring, but he still manages to somehow keep it fresh and lively. Herb Edelman is fun as the high-strung manager and famous bad guy Marc Lawrence has an amusing bit trying to chase down the pair while driving a car with an old lady passenger.

Osmond fans may rate this slightly better, but there’s very little to recommend and best viewed as a curio on a slow night.