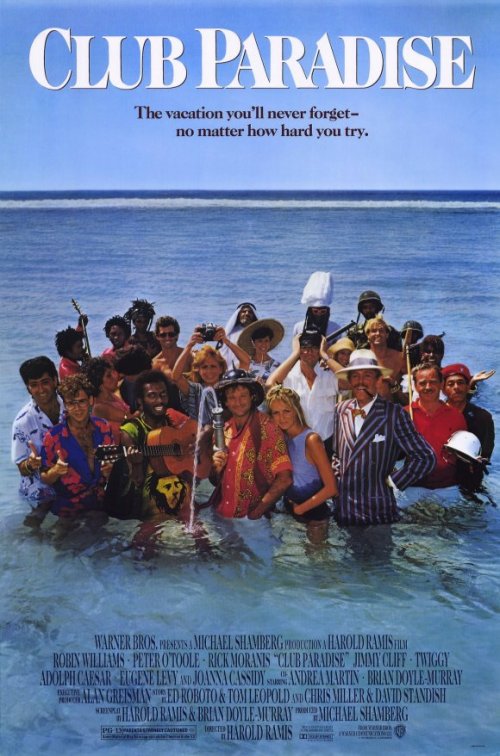 4-Word Review: Life on the beach.

When firemen Jack Moniker (Robin Williams) is able to collect a large insurance settlement after being injured while on the job he decides to retire and move to Jamaica. There he meets Ernest (Jimmy Cliff) who owns a rundown resort and has gotten far behind on his taxes and now being harassed by the Island’s Prime Minister (Adolph Caesar) for payment. Jack decides to help his friend by fixing up the place until it becomes a snazzy destination that attracts people from all over. Soon a bunch of tourists, many of them on the eccentric side, are flocking to stay there, but Jack finds it hard to keep up with their demands while also battling Voit (Brian Doyle-Murray) a competing resort owner who feels Jack is infringing on his territory.

The film starts out pleasing enough. Cliff’s reggae songs are great and the island scenery, which was shot on-location in Port Antonio, Jamaica is soothing to the eye and spirit. Unfortunately the laughs are sporadic and the plotline minimal. Part of the problem is that it doesn’t stay focused on the Jack character. The story jumps completely past him buying the resort and rebuilding it and instead goes directly to the eccentric guests and their cartoonish behavior and dilemmas. The script is more like a patchwork of goofy skit-like ideas than a movie and the cast is made up almost entirely from the stars of the first couple of seasons of SCTV.

Williams is much more subdued here, which is nice to a degree as sometimes he can get a bit too hyper, but he is also not as funny. Peter O’Toole is good when he’s seen, but his screen time is so limited I was surprised that he even took the part as it’s a slap-in-the-face role for an actor of his stature.

The supporting cast is too hammy. Eugene Levy and Rick Moranis are mildly amusing as two clueless dweebs trying desperately to hit on some of the hot chicks, but when their story thread deviates to Moranis going on a surfboard that takes him on a 16 hour ride out to sea, it gets stupid. Andrea Martin comes off best and has a few enjoyable moments including most notably her battle with an overpowering shower.

Even a comedy needs some character development and this film, which boasts having 6 writers to its screenplay, has none. Too much emphasis is put on throwing in any type of joke or humor that it can much of which is on  a childish, preadolescent level that will bore and annoy most adults.